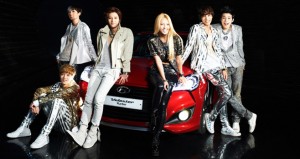 As Jasper noted in his review of the PYL Younique Album Vol.1 (Premium Younique Lifestyle), the nature of idol endorsements has evolved from simply having an idol holding or standing next to a product to full-on collaborations between brands and entertainment companies. There is literally now a whole song and dance made about everything from cell phones to scooters, and now cars.

For its collaboration with Hyundai, SM Entertainment cherry-picked from its stable of idols six dancers– Super Junior-M‘s Eunhyuk and Henry, SHINee‘s Taemin, Exo‘s  Lu Han and Kai, and SNSD‘s Hyoyeon–to create the dance-focused Younique Unit. SM then took the “Dubstep” song to which Eunhyuk, Taemin and Kai dance during the current SM Town dance battle stages, and from it wrought “MAXSTEP,” the title song of PYL Younique Album Vol.1. As Jasper said in his review, “MAXSTEP” is a cacaphony of noise (even the title is loud) and autotune, and while it does get overwhelming (something the much shorter “Dubstep” easily avoided), I decided that there could be worse CF songs out there (and there are).

In any event, the music itself wasn’t the be-all and end-all. The main draw was clearly the dancing that would be borne from bringing together the dancers of SM to create something for the general public as opposed to SM Town concert goers–and, let’s admit it, being able to see Hyoyeon and especially Henry taking on activities outside of their respective groups. And so, fans excitedly anticipated SM’s release of the “MAXSTEP” MV on Halloween day. 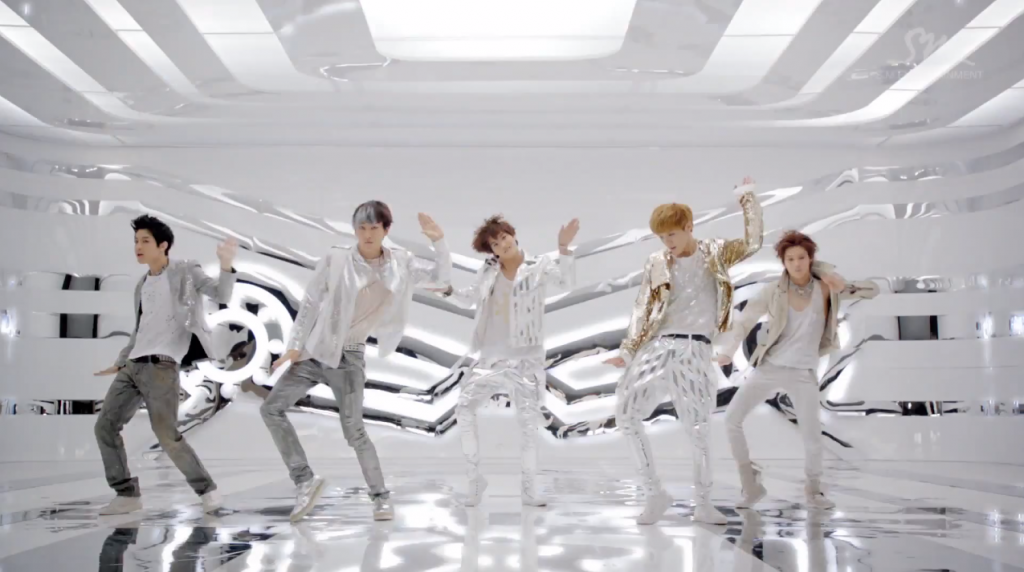 The “MAXSTEP” teaser featured the usual melée dance scenes, close-ups, different sets and questionable prop and fashion choices that have become part of the signature SM look for MVs. So far, so predictable. The black set was my favourite and also featured some of the better outfits seen in the MV (minus the gold harem pants). The white-on-white combination seen in the other set was very unfortunate, making it very difficult to properly watch and observe the members. More grey and metallic silver, like Henry and Eunhyuk wore, would have prevented them from blending into the background, as could have the inclusion of more gold like that on Lu Han’s jacket.

My biggest fear was that the  editing would diminish enjoyment of the dancing, and this did occur. From what could be seen of the dance though, in between the various close-up shots, it was clear that the “Dubstep” choreography had been recycled along with the music. The “driving” formation at the beginning of the second verse was an inspired and sponsor-appropriate choice, but other moves had a very Exo feel to them: I could definitely see strains of “History” and “MAMA.” There were also some issues with synchronisation between members and certain sequences were also repeated during the song, though the latter wasn’t such a big problem as initially thought. In fact, the rather awkward “gear change” to which Jasper referred in his album review became less so in the MV thanks to the repetition of the same set of moves from the end of the first chorus. 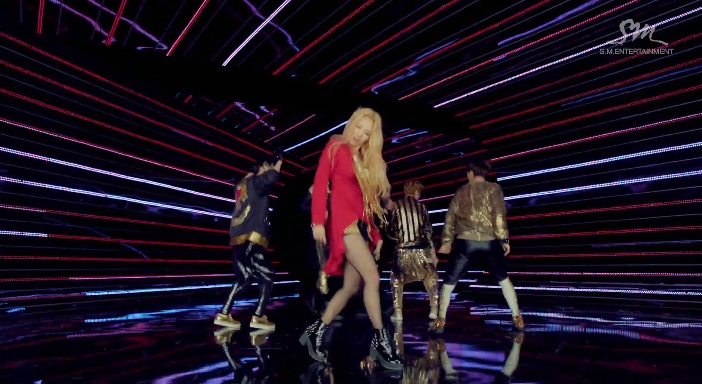 Speaking of Hyoyeon, she was missing for half the MV, but that actually worked to her advantage. Her eventual appearance served to really up the ante, and she definitely delivered with her performance. Hyoyeon enters the formation from the side, behind Eunhyuk’s back, but SM manages to make her entrance look much more boss (I couldn’t come up with a more apt descriptor) thanks to some of the best matrix cam usage I have seen from SM. Once in the centre, Hyoyeon was able to sufficiently lead the choreography, and the styling decision to have her stand out with her outfits meant that the viewer’s attention is focused more on her, and any mistakes with synchronisation become less apparent. The only negatives were to do with the song itself; apart from the autotune in the chorus, there was one line which sounded like “Rolling/Throwing/Rowing in the air”– unsure of what the actual word was, I looked it up, only to discover that it was “growling.” English lessons will be required if SNSD are to advance further into the U.S. market… 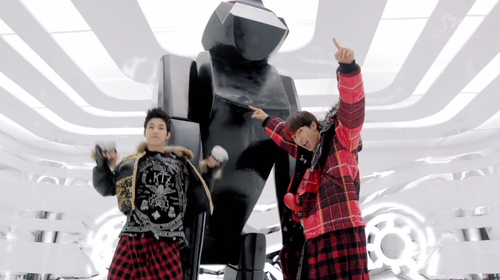 As for the boys, Henry and Eunhyuk’s scenes together were some of the most enjoyable, despite the random statue and plaid. Red hair and Eunhyuk is forever a winning combination, so it makes sense that the red fringe looked much better on him than any of those horrid detachable fringes have looked on anyone. Ever. The boxing gloves also fit the bragging lyrics of the song, but the best part was definitely the interaction between the SuJu boys, which created an engaging dynamic that definitely outshone the other solo shots (including Hyoyeon and her mirrored Y). There were fewer lines than I expected for Eunhyuk, though he led the choreography for most of the dance; but what screen time he had, he used effectively, as did Henry. Being one of the two main singers in “MAXSTEP,” “Mochi” performed commendably, and his Changmin-like adlib at the end was unexpected, but definitely not unwelcome. It was great to see him take centre-stage and sing in Korean. 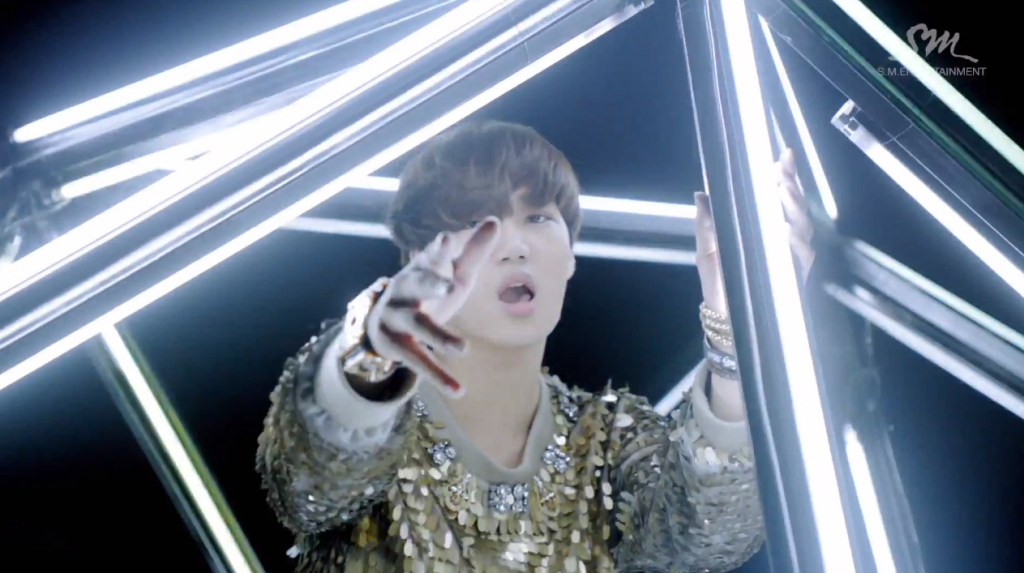 The other main singer was Taemin, who performed his role efficiently (even without his eyebrows, so brave) and gave a rather understated, yet solid, performance. He was awarded some of the more interesting pieces of choreography, and it was refreshing to see him largely removed from the centre of the formation, his traditional position in SHINee’s dances. His real-life best friend Kai, meanwhile, shared said centre with Eunhyuk, and aside from the rapping (because, let’s face it, this is SM), some of his facial expressions were odd and quickly gave away his inexperience. Kai looked awkward and uncomfortable at parts, as though he was sitting on a pile of cold, hard bullions or something–oh no, wait, he was.  Much better were the scenes which placed Kai (and others) within that tube-lit polygon; movement seems to agree with Kai better than videographed posing (he’s pretty decent in photoshoots). Kai’s expressions will improve with experience, but here’s to hoping that he doesn’t become the go-to person for screamo: that shot of him actually screaming, though perfect for Halloween, was really not necessary. 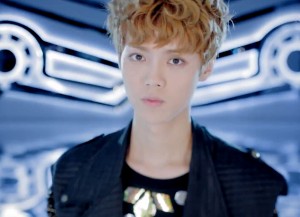 And then there’s Lu Han. There are many fans out who feel that Lay should have been the Exo-M dancer included in this unit. In terms of performance, it cannot be argued that Lay would definitely have been a better fit for Younique Unit: not only is he the main dancer for Exo-M, but he would have also been able to put on the required aggressive air that Lu Han simply lacked in this MV. While examples of this are few thanks to Exo’s limited discography (hint hint, SM), Lay’s “Phoenix” teaser and “Two Moons” performances (with Kai) show Lay’s strength, but the “History” and “Mama” MVs show the difference between Lay and Lu Han: the former is capable of bringing it when needed, while the latter looks… twelve? Lu Han is a talented individual, but he does have problems with engaging with the camera. Hopefully, time and experience will lead to improvement, but for now Lu Han has the weakest presence in the MV (and has the worst hair, to boot). So why include him, then? Simple: he is by far the most popular Exo-M member in Korea. While Hyoyeon and Henry were chosen despite being less popular than their own group members, SM’s ambitions for their newest group may mean that the company is avoiding risk with Exo and taking the safest route possible, which also involves promoting the more popular members, sometimes at the expense of quality. 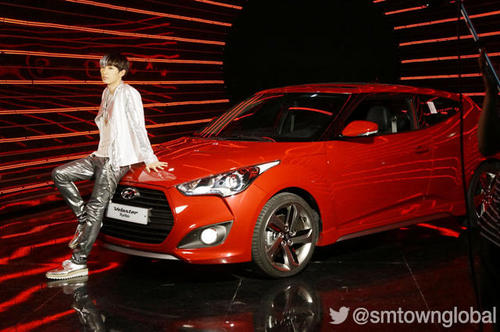 There is one more thing that needs to be addressed before this review is wrapped up: the car. Each song in PYL Younique Album Vol.1 is dedicated to a specific model of car, and “MAXSTEP” is in honour of the Hyundai Veloster. We see glimpses of the Veloster in some of Taemin’s solo shots, with K-pop’s former maknae at the wheel, but we never see the whole car. This is really a shame because SM has previously featured cars prominently in its audiovisual material, the best example being SHINee’s “Lucifer,” from 2010.

“Lucifer” didn’t necessarily need a car (or three) in its MV, yet they have been showcased very well there. If I were Hyundai, I’d be miffed that the idols are getting more exposure than their own product, on their money–they’ll just have to settle for the behind-the-scenes video. “MAXSTEP” may not have delivered 100% and is rather run-of-the-mill, but the MV did generate publicity for the brand and fans were able to witness more collaborative efforts between idols. earning it a 2.75 out of 5.

Readers, what are your thoughts on “Maxtep” and Younique Unit? Did you like the choreography? Do you think the right members were chosen? Please, leave your thoughts below! 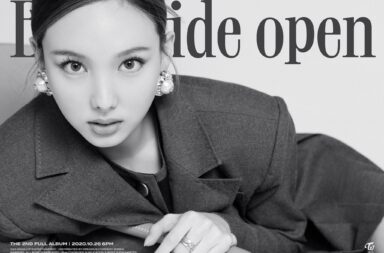