Welcome to the Family, the Entertainment Company Family 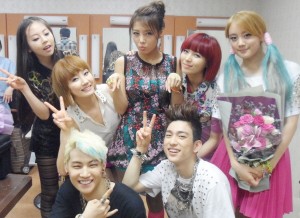 There have been numerous debuts in 2012, some with companies no one has ever heard of, another set of initials to see, while others with fairly well-established labels that have recognizable artists to their names. Just to name a couple of the latter, we have EXO joining SM Entertainment‘s stronghold, B.A.P joining TS Entertainment, EvoL with Stardom Entertainment, and JJ Project and 15& with JYP Entertainment. Managing one group alone seems difficult, but to add on another? There has to be some type of benefit for doing so, aside from the potential increase in income that is. And one of those benefits is none other than the establishment of a “family” which can be solidified through shared variety appearances or holding family concerts.

The idea of a “family” plays on the idea that all idol artists within an entertainment company have or will have contact with each other that allows for closer bonds of friendship to form. These bonds allow for the groups to talk about each other in interviews or on variety shows, essentially to use those bonds as ways to promote each group and provide the image of a close sunbae-hoobae relationship. That’s not to say that these bonds aren’t real or that they’re forged purely for superficial reasons. Indeed, it’s most likely not the case. But it can’t be denied that mentioning certain sunbaes as having given exceptional advice or seniors in the industry mentioning their juniors helps at least the younger groups gain more recognition and attention. Fans are more inclined to give other groups a chance if their favorite groups exhibits a close relationship with those other groups. It’s a matter of spreading the appeal of the original favored group to the groups that said group favors. While this doesn’t always work smoothly because this effect can’t overcome that of bad music, it can at the least create a foundation for groups to gain more fans by recommendation.

This “family” atmosphere often comes across as being homey as these bonds shown tend to be genuine ones formed from shared experiences from trainee days or since debut. And homey is a feeling that viewers and fans can trust more easily, which is in part why the larger companies have such dedicated fanbases. This atmosphere immediately becomes more apparent when members of different groups from the same company have share appearances on variety shows. Not only are both sides more comfortable with one another on set, but they can help each other out if either falls into a rut. Also, if one is doing too well, the other can whip out the image-ruining stories, as a joke of course. For these reasons, episodes such as Strong Heart‘s YG Special are a pleasure to watch. YG Entertainment‘s close-knit family has been known amongst fans, with T.O.P and Se7en collaborating, Big Bang and 2NE1 working together, and the easy friendship the artists display at random. The special only solidifies it with those quirky and unexpected stories coming out as artists open fire on one another with their stockpile of collected memories. 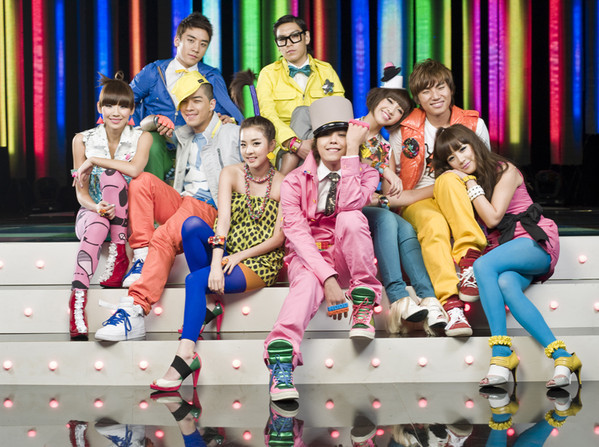 Homey also is a feeling that fans can appreciate. Hopefully genuine, fans prefer seeing their favorites interacting normally, getting along well with other artists. For some, this creates fodder for every ship imaginable–he smiled at her guys, smiled–, but for others, it’s possible to receive a form of satisfaction because if your idol looks content and fits in well with the rest of their family, then you can be content in seeing that happen. It’s a transfer of sentiments that can make a fan coo at their favorites from behind a computer screen as artists dunk each other in water or just play around.

These “family” images work well for endorsements or projects as well. Endorsements rely heavily on the image of artists, preferring to play with whichever concepts or groups are creating the most interest at the moment or have the potential sell their product the best. SME groups have worked together for a number of CFs, most memorably as endorsers and models for SPAO clothing. It’s even a deal that has stayed within the company, with the recent female models switching from SNSD to f(x). Everland Resort’s Caribbean Bay CFs have frequently used 2PM as their main model, this year bringing in miss A‘s Suzy to work alongside the men. Similarly, JYPE collaborated well for Reebok’s “Classic Campaign,” working together to create a song and music video to catch attention.

Along a similar vein, groups from the same company can come together to release compilation albums or songs with a particularly purpose, such as hailing in the new season. SM Town put out a winter album with all artists participating on tracks. 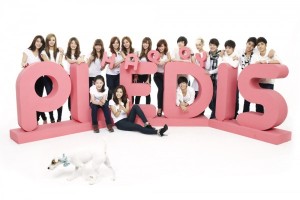 Pledis Entertainment has released charity singles under the name Happy PLEDIS, creating these singles with the participation of artists on hand. Starship Entertainment, which houses K.Will, SISTAR, and Boyfriend, released digital single “Pink Romance” under the name Starship Planet late in 2011 as thanks for the support they’ve received. When Cube Entertainment was setting off on their concerts, the three main artists–BEAST, 4Minute, and G.NA–released “Fly So High” as a promotional track.

And at last, there are the family concerts. SM Town, JYP Nation, YG Family, and United Cube are some of the more familiar names that family concerts have taken. SM Town now routinely travels at least through Asia while United Cube has even made it to South America. These family concerts bring the artists under a single entertainment label in a tour to multiple countries. While they can have their downsides, they are a way for fans to see groups they like and maybe groups they don’t, but all in a fun atmosphere. The opportunity to see multiple groups at one concert is also a bigger draw for many than just seeing one. If money is tight and desire to attend a concert is strong, it’s more likely that a fan is going to pony up the money to see multiple artists, something a la the upcoming KCON or SBS concerts, than an individual artist’s concert, unless, of course, they belong to that individual artist’s fandom. Family concerts play on this, advertising the variety in the show, using a more varied setlist to bring in a full crowd.

Probably the biggest part of holding these family concerts is establishing a label as having multiple artists that all get along with one another, much like, well, a family does. There’s nothing more that fans like seeing than their idols interacting with one another, whether it’s joking, singing, or doing something as simple as slinging arms around one another. These concerts are the jackpot for all these moments, hopefully unplanned, that fans can witness live. The concerts also lower the burden on the artists themselves by restricting them to fewer performances than they would have for a solo concert. And of course, there are the hopes for joint stages. SM Town tends to have dance stages involving their groups’ main dancers, has more recently been putting TaeTiSeo with EXO for “DJ Got Us Falling in Love,” and even sometimes has the Jung sisters perform together. And while not exactly a collaboration, I don’t think it’s easy to forget Big Bang dancing to 2NE1’s “I Am the Best” at one of the YG Family Concerts. 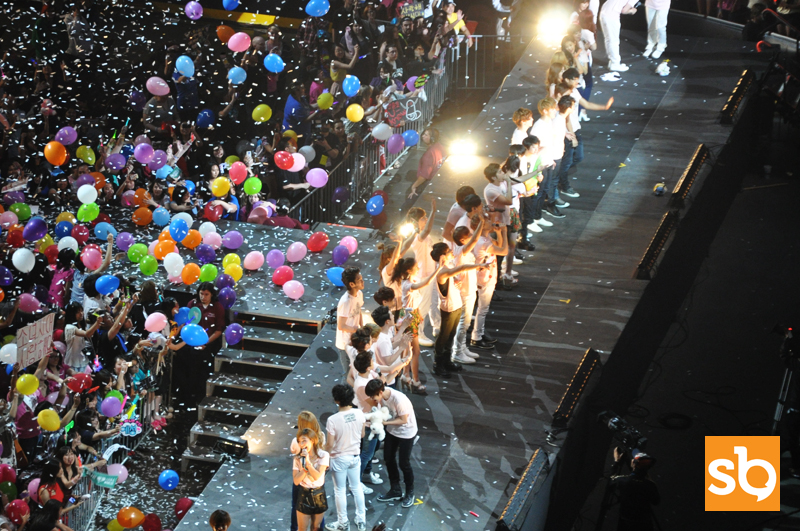 All in all, families within entertainment companies is sold fairly well and brings profits for companies. Though it’s difficult to put a new group out and have it be successful, especially with the excessive number of new groups this year alone, should that group achieve an appropriate amount of notice and fans, it’s possible for a company to work it’s way up through greater collaboration and synergy to holding family concerts or using different marketing strategies to promote the company as a whole.

But what do you think, Seoulmates? Is this “family” business a pretense that isn’t favored? Or do you buy the play and find benefits for the fan as well as the company in the image? Leave us a comment with your thoughts!