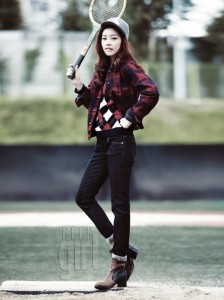 Goo Hara of the quintet girl group KARA didn’t get much alone time to herself. As a member of a K-pop idol group, her schedule was constantly filled, barely giving her time to sleep let alone have fun. Between variety shows, performances, MC-ing, jetting back and forth from South Korea and Japan, dance practice, vocal practice, photo shoots, company meetings, costume fittings, and who knows what else, Hara was always busy busy busy.

But every so often, when the sun burst through the clouds and rainbows shined over Seoul and the moon was full twice in one month, Hara had a day off. There was one time when she had a week off, when KARA wasn’t performing on music show nor preparing for a comeback and when she was free from her usual job as an MC. During this week, she caught up on her sleep, went shopping, and met up with her friends Phil, Mo, and Larry for skateboarding, rollerblading, and tennis. 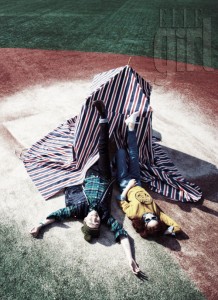 People often took Hara as a girly-girl, and in a way she was. She adored fashion and dressing up, taking precarious time in the mornings to style her hair, carefully apply her makeup, and put together outfits. She drew inspiration from the American TV series Gossip Girl, using Leighton Meester’s character Blair Waldorf as her fashion idol. Hara admired Blair’s preppy, feminine style but liked to mix it with her own more tomboyish fashion sense. She would look out for plaid and stripes but most often in the form of shirts and sweaters. She rarely wore high heels, preferring comfortable flat sneakers, and opted to not wear headbands. Her brand of choice was Lacoste when it came to preppy clothing, and she chose to wear that brand most of the week.

Despite knowing she’d be outdoors most of the day, Hara couldn’t resist wearing her new short leather boots. They were adorable, with a small square heel, light brown front, and black back. To show off her boots, she cuffed her denim jeans. To add extra style, Hara layered a red-and-navy plaid shirt over and argyle sweater. The sweater was also red and navy, making the opposing patterns mesh.  Later on, however, Hara went with a much more simple outfit, wearing only white sneakers, bright blue sunglasses, denim jeans, and a yellow sweatshirt as she laid back and relaxed with her friend Moe on the pavement. Moe was funny but a great person to talk to about issues, and so Hara expressed her worries to him. 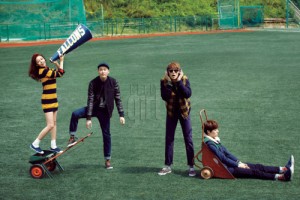 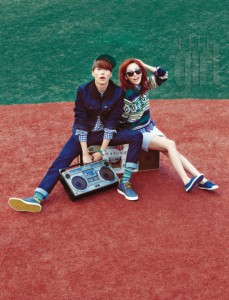 Hara went shopping the next day, looking adorable in a striped yellow-and-navy dress, tall white socks, and blue sneakers. Not even an hour into her shopping trip, she was accosted by her friends, who dragged her to their usual hangout by the tennis courts. While the boys messed around, pushing each other around in wheelbarrows, Hara found a large microphone to play with, and immediately became the referee. A day later, Hara came back to the courts to meet up with Larry, who wanted to show her new music. Wearing a light-blue skirt, green sweater, and plaid shirt, Hara looked comfortable and stylish. She was surprised to see that Larry, always the random one, had brought boomboxes. The stereos were so big, sturdy, and square that Hara could sit on one without breaking it. 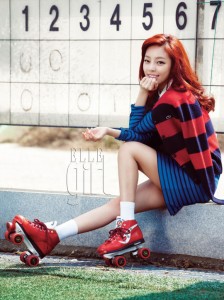 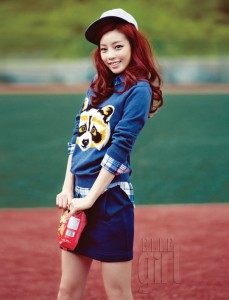 Hara wasn’t always with her friends. There were moments when she need time alone to collect herself. She found it easier to think when she was busy with an activity, such as rollerblading. She had a pair of bright red rollerskates, which she matched with her striped red sweater. Underneath, she wore a striped blue dress. Simple but cute, the contrasting colors made her outfit pop. Some would say that it’s a bad idea to rollerblade in a dress but Hara was a pro on rollerblades. She effortlessly avoided obstacles and kept her wheeled feet from straying too far away, even when she was lost in thought. Other times, Hara wouldn’t feel like rollerblading, instead choosing to go for a regular walk in the park. Knowing there were cameras everywhere, Hara put together an adorable blue outfit. From under her raccoon-printed sweatshirt, a plaid shirt could be seen, cuffing around her elbows and framing her hips. To feed the birds, she bought a bag of snacks.

Hara’s week of freedom came to an end all-too-soon. She loved performing and seeing her fans, but freedom was so rare and work so rigorous that she felt petulant going back to work. But knowing this was the career she chose, Hara put away her bad thoughts and focused all her attention on KARA’s comeback for September.