Jewelry Wants You to Look at Them

Girl group Jewelry, from Star Empire Entertainment, has always been one of the many groups I never really cared about, nor ever stood out to me. I knew some things about them, like that they’ve gone through many member changes and are currently standing at four members, but not much. However, in seeing their recent comeback music video, “Look at Me,” I was intrigued.

The song “Look at Me” is about a girl demanding a boy to only look at her, an expression I often hear in the Asian entertainment world (“Only look at me!”), and the MV did a pretty good job of embodying that without even having a boy in it. The MV was rather discombobulated, going from scenes of Eunjung rubbing lipstick all over her cheek, to Yewon dancing provocatively in a hallway, and further on to Semi lounging on a couch. The beginning has a more mature feel, with Eunjung sitting at a vanity, Yewon dancing sexily and Semi sprawled out on a couch, but later, the MV becomes more kid-like. “Look at me” is written out in huge letters against a blue wall, looking like paper cut-outs, and the ladies are suddenly dressed in pajamas and stuffy dresses, on a pillow and blanket-covered couch. I could understand the gyrating dancing, because it’s meant to attract attention and give off a strong attitude. I could understand the sexy clothing, which makes them appear more mature and comfortable with themselves, fitting their demand. But I don’t get why the MV would suddenly go a cuter route halfway through, with the considerably less serious settings and props. It was doing fine before with the ladies asserting themselves as sexy, classy women. 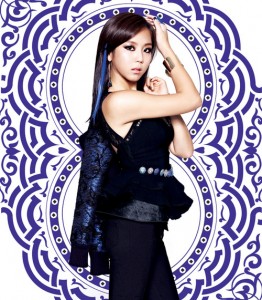 backsides, which is fine. Provocative moves like that often give the impression of confidence, which would fit with the MV’s theme. But the choreo felt flat. It lacked style or anything that would give it attitude or distinctiveness. It seemed entirely comprised of sexy moves, making it look more contrived than anything, and the girls clearly are not the best dancers.

The girls’ performances, however, were fine, aside from the dancing that is. They embodied their solo scenes, putting plenty of emotion and attitude into their singing and rapping with gestures and facial expressions. Watching their close-ups was way more interesting than appreciating their dancing, even when Eunjung was playing with her lipstick. My favorite was Baby J, who’s always been quite a rapper, even with all her weird facial contortions.

The cinematography is alright for the most part. The MV looks shady at times, and especially dark during the scenes with them in the bare stone room. Maybe it’s done purposely to make the video more sultry, but instead it makes it harder to focus on the girls. Other parts I didn’t like were the dance sequences, when the camera would creepily pan really close to their sensitive parts. One instance would be during Baby J’s rap when she pointed her finger down and the camera followed. The image looked rather off-putting to me. But other times the camerawork was fine, capturing the girls’ cutest moments and appropriately following their bodies for added sexiness.

All together, I’m giving the MV a 3.5/5 for questionable choreography, alright camerawork, good emoting, and efficient purpose.