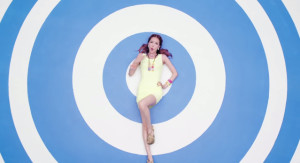 One of the veterans of the K-pop girl group scene, at least where the name is concerned, Jewelry have seen more ups, downs and member changes than the average girl group going through concept changes.

In its current form, the group has been a solid player in the B-list girl group stakes, having come from rather mediocre material in the form of “Back It Up” to tastefully sexy songs like “Look At Me”. That, coupled with member Yewon’s star turns on the variety/drama circuits and some recent quality additions to the vocal front, have ensured that Jewelry are slowly clawing their way back into the K-pop listener’s conscious.

So with their latest release, “Hot And Cold,” do they continue on their upward trajectory?

The MV follows the usual girl group choice of clichés: equal parts family friendly seductive moves, equal parts hackneyed plot, and the rest of it dedicated to the dance moves. 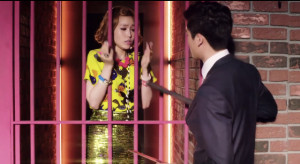 I choose to mention the dance moves because it’s rare for me to see a music video these days where the dance strikes a nice balance between being overtly sanitised and becoming an exercise in how many butt or chest thrusts one can do within three to four minutes.

Instead, what we get to represent sexy is largely facial expressions (half of which are so clichéd, they seem funny), as well as some overtly exaggerated arm movements. So while they might call it sexy, it could never be called cheap or tasteless; and in some ways it’s nicely funny in how they parody the overt sexiness in K-pop girl group MVs these days.

In fact, funny would be a very good term to describe the plot of the music video, which revolves around the members being jailed, and them trying to escape by seducing the heck out of the warden/investigating officer (played by ZE:A’s Hyungsik, a label mate). Ignoring some of the blatant plot holes there (why is the prison warden in a suit and also doing investigations), as well as there being no explanation for how they manage to escape in subsequent scenes, I smiled a bit at the subtle humour here and there, and there was enough for it to not bother me.

One thing worth highlighting about this music video is how good everybody seems to look in there. It appears that when all fashion choices fail, the best way forward is to go with skirts, blouses and suits with a dash of retro themed accessories. A particular surprise for me would be how good some of the less prominent members, like Semi and Baby J, looked in the music video.

As for the sets, the colour schemes did the job without being particularly outstanding in any way. If there was one criticism, it would be those strobe light effects in the music video, which may be the in-thing in music videos these days but are pretty annoying and seem to give the video an overexposed look. 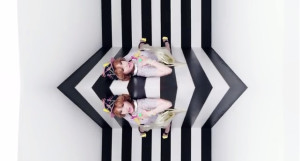 And what about the song? Like the fashions, it chooses a backing tune that is distinctly ’80s synth and mixes it with some modern elements such as a rather up-beat tempo and a rap break or two. Despite sounding largely like most other K-pop girl group songs whose theme largely consists of being sexy, I quite liked this one. Chalk it down to a good mix of decent vocals, which are strong without being overpowering at any point, and a rather well composed tune.

Overall, like most recent Jewelry tunes, I found myself liking this far more than expected. By striking a nice balance from the song to the music video, the concept does little to alienate listeners and a lot to attract them. The only problem is the same with most girl groups in general — achieving higher standards and requiring ever more “interesting” promotional techniques to stand out. Maybe Jewelry (in its current form) might be destined to stay rooted in the B-list.