Two months after releasing “Day by Day,” a fifteen-minute-long music video depicting a post-apocalyptic, video game-like world, T-ARA has returned again with the long-awaited second part to “Day by Day,” which features three different songs: “Sexy Love,” “Day and Night,” and once again, “Day by Day.”

Recap: Hyomin and Dani were living an impoverished yet happy life until Jiyeon, a gang queen, comes along, grievously injures Hyomin, and kidnaps Dani. Hyomin is rescued by a mysterious man that takes her back to his place to recuperate for several years. Meanwhile, Jiyeon tricks blind Dani into believing she’s Hyomin and uses Dani’s power for her own selfish benefits. Hell was expected to break loose when Hyomin wakes up from her coma. 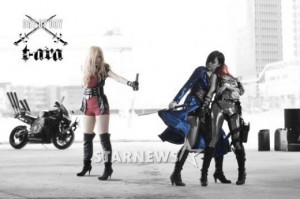 And so it does. At the beginning of the MV, we see the mysterious man saving and riding off with Hyomin, and then Hyomin looking dramatically into the distance as she reminisces. Mystery Man reappears and takes Hyomin to her bike, while we see flashes of a miserable-looking Eunjung in a beat-up old car you may remember from the first MV. Hyomin drives off and the scene switches to Eunjung effortlessly killing men with her sword. Jiyeon reappears, doing what she does best: strutting. She struts in and struts away.

Hyomin witnesses all of this and is horrified to see Eunjung working for Jiyeon. Their reunion comes shortly afterwards, but conflicted Eunjung doesn’t trust Hyomin and leaves. She most likely is experiencing distress over who to trust and what happened in her past. Jiyeon reappears at a club, Soyeon by her side, and after coming to a conclusion, Eunjung arrives to kill her, meanwhile killing every man that gets in her way. The music video ends tragically (of course), the final showdown resulting in Hyomin and Jiyeon’s death and a grieving Eunjung.

This music video is more slow-paced than the first, not quite so interesting, and once again there is unnecessarily added behind-the-scenes footage at the end. Everything seems to happen very quickly, like over the course of one day. Despite having been Jiyeon’s companion for years, mislead into believing that Jiyeon is Hyomin, Eunjung seriously doubts Jiyeon and quickly comes to a decision to betray her. You’d think she’d need more time than one evening to deal with a lie she’s been fed for several years. Adding to the unbelievability of this, Eunjung’s character is blind and would have no way to recognize Hyomin aside from her voice, and yet she quickly discerns who the imposter is. Most of the video features boring segments of Eunjung rethinking her past and Hyomin walking around. The only interesting parts were the fight scenes, which were messily choreographed. I’m also sort of wondering why Jiyeon only has men working for her and why Eunjung only slays men with her sword.

However, the camerawork and cinematography of the music video was stunning. Clear and crisp, the landscape did look believably 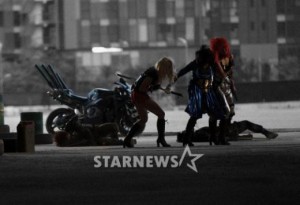 barren, like you would expect of a post-apocalyptic world. The girls looked stunning and the splashes of color — Hyomin’s hair, Jiyeon’s shirt, Eunjung’s coat — made them stand out against the bleak background. The camera did its best to captured them from their best angles and even the cheesy fight scenes were made interesting by the shifts in perspective. There were obviously fake special effects, like when Jiyeon was run through, that were made less cheesy through the clever camerawork. There were some problems, though, like Eunjung’s blue eyes. CCM spent so much on making the video as HD as possible but couldn’t properly make Eunjung’s eyes look realistically blue.

The girls’ performance was alright. They’re not great actresses and don’t do well at emoting or changing their expressions. Jiyeon’s personality never changes in the video, forever having a snarky look on her face as she struts and poses around. Her fighting skills were considerably less polished compared to the others. Eunjung, although she also couldn’t put forth any other emotion aside from one, did the best job and her sword-swinging was pretty believable. Hyomin also did an alright job with her acting, but her death scene was ridiculous. She twirls in front of the blade. Aside from that, the girls’ grunts, screams, and moans quickly became distracting and annoying.

Pretty but boring, this music video receives a 2/5.