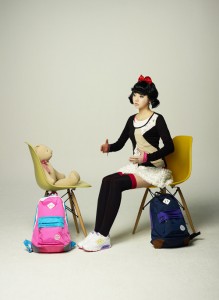 Lately, K-pop has been pushing forward an intriguing trend: the post-human being, either in the form of a doll or a cyborg, presented as a more functional human ready to take over the future. In both cases, they represent an upgraded version of a real entity: a human being. Both carry though a distinct meaning.

Women in photoshoots often appear as dolls or receive compliments for their doll-like figure. The toy is the culmination of all standards of beauty that found its shape in an object, the perfection available at a few bucks for girls and women. They proffer not only beauty ideals, but also gender roles. The whole Barbie thing has been overdiscussed by now, with its mainly negative implications. Instead of having dolls imitating real-life women and constituting a representation of a girl, you’re looking at an object and expect its owner to look alike. 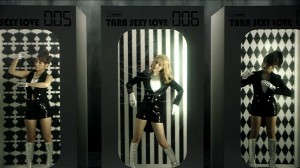 A considerable number of K-pop idols adopt this front as a sign of pride. In an image-conscious society where it’s mandatory for your résumé to have a photo, it’s to be expected of SNSD to sport the doll-look as a proof to fans of their physical perfection. The message they send though is problematic. As you can see in T-ara’s “Sexy Love,” where the girls are half robots/half dolls, the dances and the appearance of a dolly world is one of passiveness, with limited moves and possibility of action. This video or CHI-CHI’s “Don’t Play Around” have the same beginning: the girls are confined in their boxes, with a vacuous look and forced to keep the same pose, with the only advantage of looking good.

Although both of the videos show the girls escaping their boxes, the video director doesn’t seem very OK with it. The T-ara members get individual shots in their packaging, while the girls of CHI-CHI dance in front of their initially enclosing space. The message from T-ara’s video, combined with the lyrics, tells the story of a sexy girl who likes a sexy guy. There’s no clue whatsoever about their feelings, but only the boy’s sensuality and the sense of entitlement they have over him because of their sexiness. The doll in this case reduces the girls to a single trait: their aspect that makes them desirable.

The latter uses dolls as a metaphor of being played by someone, presenting the girls as naïve and gullible, intentionally demeaning themselves from an intellectual and emotional point of view. Their first love is a cheater, so they escape the boxes they entered in the past due to their innocence and submission to that boy. While the revenge hints at empowerment, the way they portray it is laughable, with the tone of the music mocking them as they speak. The lyrics are all about what they want a guy to do with them:

which contradicts the sudden reprise of agency in their catchphrase: 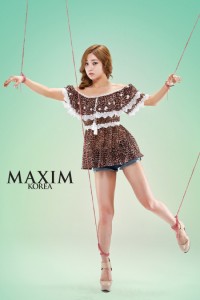 In comparison to them, SNSD’s “Gee” is actually a step up. While the girls are put together as any kind of merchandise on a store’s shelf, they break free from their condition, they run around the room speaking about their first love story, but when they plan to come back to their given roles, they decide to break the rules and go out having fun. Another twist in the doll concept was the appearance of Piggy Dolls, whose name challenges the definition of beauty. G-Dragon kissed an abnormally-sized Barbie doll, which then proceeds to slap him, giving the seemingly passive object the agency of a subject to mock the way the media objectifies women.

The doll has become with time a symbol of women’s restricted role in society. Valued and bought depending on their beauty, dolls present women in most of the cases as inoffensive, self-centered and fragile. If these plastic objects do a lot more than their apparent function, robots head a different direction. They are the improved version of humans, conceived with their help to surpass them.

The fascination with robots is similar to the interest paid in a simulated reality: instead of enjoying the human being as it is and treating the robot as an imitation, people love staring at how people imitate robots (who are supposed to imitate humans in the first place). Technology is a symbol of an infallible creature that can’t be defeated, one that’s superior to humans with the means they invented. A parallel with dolls is not that far-fetched: both own their existence to somebody else and encapsulate perfection for other people’s enjoyment. 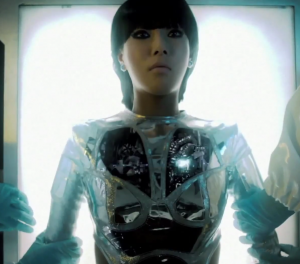 Wonder Girls’ “Like Money” femme fatale concept could be also perceived as a combination between dolls and robots: they are beautiful through their manufactured body. Furthermore, the comparisons in the lyrics with money or cars suggest an even more disturbing conclusion: they ask to be treated like possessions and mere objects that have picked their owner. T-ara’s “Sexy Love” plays the same angle: they are something in between robots and dolls, which confers them an above-human status, including a superior power of attraction. SNSD’s “Visual Dreams,” maybe because it’s a CF, objectifies them just as much, with the girls subtly alluding the phones are their replica.

2NE1 prefers a different approach. The tight costumes which make the metal appear as part of their bodies suggest empowerment from invulnerability. Still on the same angle, B.A.P. introduces a new mentality and causes a revolution because they refuse to abide the same rules and regulations. They offer a superior, aggressive and uncompromising mindset to break humans’ dysfunctional society; the cyborgs represent their resistance to people’s gimmicks. SHINee, on the other hand, express through their nearly robotic dance their feeling of entrapment by their girl, whose whisper subdues them. In the same category, Miss A’s “Touch” robotic dance is synonymous for the lack of feeling. While 2NE1’s invincibility comes from their particular un-human selves, their pals from JYP use this symbol to suggest their inability to be moved. 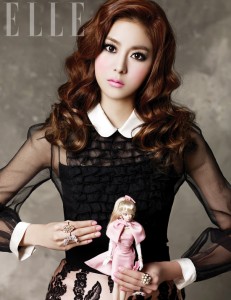 The spectrum of ways in which these icons for beauty and scientific evolution are presented proves an increasing interest for alienation in an object. Maybe it’s just the oversaturation of the music scene which makes it harder to develop a coherent identity or maybe it’s the fascination with different shapes. Wherever the reason lies, the thought of replacing an actual body with a plastic or metal piece for a symbolic message is less than thrilling for me. The constant objectification of these idols which occurs on every single level they manifest in reaches in this case a terrifying and saddening proportion. I don’t deny it might be fun, but it’s that type of laughter that leaves me with a bitter taste.

Enough with my opinions though. What do you think on the topic? Is it harmless to have idols portrayed this way or are there interpretations we’re missing out?