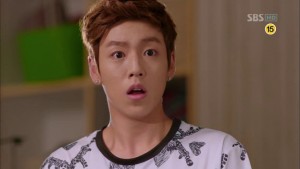 It’s a great day in September because not only is it two of my besties birthdays, a long awaited announcement was finally made (scandal, schmandal).  But enough about today, what wondrous things in K-pop went on last week?  G-Dragon released his new solo album “One of a Kind” and got his “Cray-On” with his comeback on Inkigayo,  F.T. Island (did I ever mention that after seeing them live in concert I love them now), KARA, and Lee Jang-woo  had awesome performance on Yoo Hee-yeol’s Sketchbook,  Running Man chingus Song Joong-ki and Lee Kwang-soo reunite in their latest drama where Joong-ki plays a not so Nice Guy, if you like a side of AB+ with your drama Vampire Prosecutor 2 also just debuted, Arang and the Magistrate is awesome–but not always easy to explain why, To the Beautiful You is worth watching if not for the eye candy, for the awesome soundtrack that features some great solos and duets from SM Entertainments’ artists (and yay! the mushroom head haircut is no more), and PSY rocked the Today Show, appeared on Saturday Night Live, and his MV has surpassed 200 million hits.

These are the 5 Things that happened in K-pop last week that I think were a little bit better than the rest.  Spoilers Ahead!  If you didn’t know, now you know.

Running Man surprises me in the most unusual ways.  I’ve found that these episodes in which they bring on older actors to be amongst the most amusing, these ahjusshi are so cute.  The guests for this episode were actors Son Byung-ho, Im Hae-ryong, Shin Jung-geun, Lee Jong-won, and Go Chang-seok.  Loved this little segment when their mission was to get at least a score of 90 while trying to sing a song on a roller coaster. Lee Kwang-soo + Go Chang-seok = WIN.

Last week’s Immortal Song Season 2 featured the songs of Yoo Shin-nae and although f(x)‘s Luna did great and MBLAQ‘s G.O. had a winning performance it was Toxic, the winners of Top Band Korea Season 1, whose performance had me wowed.

3. A New Love alights on WGM

The new couple of ZE:A‘s Kwang-hee and Secret‘s Sunhwa feel more like BFFs to me than a newlywed married couple, but it is fun to seee them interact because there are so comforatble with each other.  I did think that this was so cute when Kwang-hee sang C.N. Blue‘s “Love Light” to her.  He’s no Jong-hyun or Yong-hwa vocally, but it was still cute nonetheless.

On the latest episode of Infinity Challenge, the cast split up into two teams to create their own “Gangnam Style” MVs. Did anyone expect anything less than MVs of epic hilarity?  Here’s Yoo Jae-suk‘s team MV, how do they think up this stuff?

Answer Me 1997 continues its greatness with an awesome episode in which the struggles between Yoon-jae and Tae-woong are mirrored through a story of Papa Sung‘s father and uncle.  The big secret is out and when push comes to shove Yoon-jae finally stands up for the love of his life just to find out that his hyung loves him a little bit more than he thought he did.  Only one episode to go!