Months ago, seven-member group Infinite released a photo shoot with W Korea, displaying a robotic theme with glacial expressions, frosty-looking makeup, and a chilling atmosphere. They have now returned to W Korea to film another photo shoot, not too different from their previous. Set in what looks like some sort of warehouse, amid pipes and staircases, the boys pose around a dirty, bare room. Their positions are sometimes a little awkward — who leans on a wall like that? — looking half-ready to run, but their frozen faces say otherwise. Contrasting with the blue background, the boys’ brightly colored sneakers and jackets, which look especially HD, stand out against everything else. You could say the theme of the photo shoot is rebellious youths, if the threadbare setting and outdoorsy jackets are anything to go by. 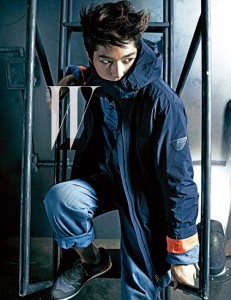 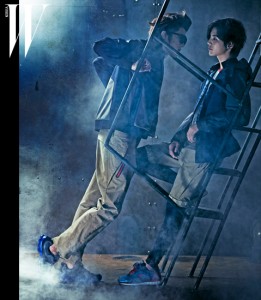 Myung-soo is everywhere in this photo shoot, in almost every picture, especially at the center. Not surprising, considering his position as visual, popularity, natural model skills, and good looks. In his solo photo, half his face is covered, something I see quite often in K-pop. Concealing half your face hides half your beauty, but it also gives you an aura of mystery as it does for Myungsoo in this shoot. Of all the members, Myungsoo is the best model, his posing and expressions always looking the most natural and effortless on camera. Here he looks a little unreal, almost like a CGI, most likely a result of too much Photoshop. Beside his photo is Sung-yeol and Sung-jong’s. Leaning against a stairway, Sung-yeol and Sung-jong’s photo is more intense than the others, amplified by the steam surrounding them. Sung-jong, also a natural model looks gorgeous, but I strongly resent his outfit. I don’t know why shorts over leggings has suddenly become very popular in K-pop, but it needs to stop. It just looks silly. 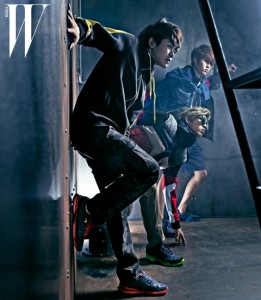 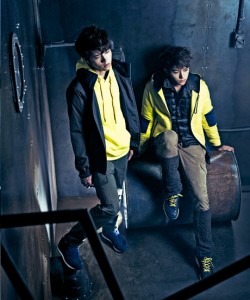 Hoya, Dongwoo, and Sungyeol appear together in one picture, posing against a wall. The side-angle the picture is taken at offers an interesting perspective but causes the boys to go into awkward positions in order to be seen. They all look ready to run, Dongwoo especially. Like Myungsoo, they have this weird CGI quality to them, a result from excessive Photoshop and odd coloring. Myungsoo and Woohyun match in the next picture, both wearing neon yellow and black. Myungsoo, for whatever reason, is wearing cable-knit leg warmers over his pants. Woohyun looks half asleep and his feet look strange, one foot propped up on a pipe but with weird shadowing and proportions making it look entirely unnatural. 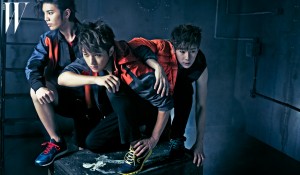 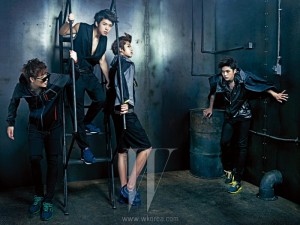 Sung-jong, Myung-soo, and Sung-gyu all crouch on a box for one of the final pictures. They’re all matching in orange and navy blue and looking very serious with their heavy eyeliner and heavily hairsprayed hair. Like in the other photos, they look ready to run. Not much can be said about their outfits with them being simplistic and obscured by their positions. The next photo has Sung-gyu, Woo-hyun, Sung-yeol, and Myung-soo. Woo-hyun is actually not wearing a jacket, instead wearing a vest with a deep V-neck, dressy pants, and sneakers. Dressier shoes would’ve looked better but they’re not advertising dressier shoes. Sung-yeol sports a shark-like hairstyle and strong tendons but aside from that nothing can be said about him. Sung-gyu, like Sung-jong, has fallen prey to the dreaded shorts-over-leggings curse, which only enhances his skinny legs. Myung-soo’s glossy vest is horrid and why he’s wearing a denim jacket as a cape is beyond me. His expression is the same as in the other photos.

What do you think of Infinite’s photo shoot?