C-Clown Is "Not Alone" And Not Bad

Actually they’re pretty good–great even. Or at least have a lot of room to be great. C-Clown stands for Crown Clown, for those who were wondering why on Earth an 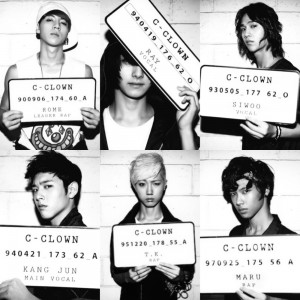 entertainment company would want to name their boy group C-Clown, instead of Clown, which would have been sufficient albeit still a terrible name.

They hail from Yedang Entertainment, which boasts soulful singer ALi and girl group Chi-Chi, but to be honest, I’m always tentative about groups with bizarre names, and I’m not particularly fond of clowns. But seeing as I managed to check out and subsquently stan rookie groups with the names B.A.P, F.I.X and EXO this year, I decided to give the group a shot. Coming from a company that has both ALi and Chi-Chi, they have a clear 50/50 chance at having a great or terrible debut.

The first song on their debut album Not Alone is an intro, which is titled “I’m Not Alone.” Being used to albums and their title tracks sharing the same name, it felt little odd that their intro was titled “I’m Not Alone,” but nonetheless, it’s a shame that it was just only an intro. The use of acoustic guitar mixed with synths and a steady tambourine beat sounded great with the soft vocals, they sounded so well together that it felt like the song was stopped abruptly instead of leading us into the album. Hopefully, like with Big Bang‘s intro in Alive, we’ll get a continuation of the song in another album. At least this intro gave a taste of the group’s vocals and who will be the rapper in the group, and they sound promising.

Right after “I’m Not Alone” is their title and promotional track, “Solo.” I don’t know if I’m alone–pun not so intended–on this one, but I felt that “Solo” sounded very MBLAQ-like circa Mona Lisa, especially with the instrumental that kept the acoustic, Spanish-esque guitar of the intro and the style of synths. This could be the result of being an A+, and having MBLAQ feels all over, but the song reminded me a lot of MBLAQ’s “Mona Lisa.” Despite my MBLAQ thoughts, the song sounds really good. Despite not having a standard hook, the chorus easily crept into my mind. It’s very average in terms of tempo and pace, but I like the stylings used within the song because it’s not autotune-heavy and is very clean production-wise. Although it doesn’t have a clear flow to the song and is very lacking in terms of buildup, because it borders being a very mellow song, it still manages to be an enjoyable listen, thanks to the solid vocals and clean production. It’s not the most attention-grabbing debut, but it’s solid all around, with the nice-sounding vocals and the tone of the rapper. This group screams promising and obvious talent, and could easily carry a fast-paced song without sounding obnoxious or annoying.

“In The Car” is a very mellow-sounding song and a steady acoustic beat. It’s nice to hear an album not depending on or using autotune and heavy production. This song has a clearer flow than “Solo” did, and has a smooth melody that feels relaxed and laidback. Although it’s not a catchy song, it’s nicely produced because of the concrete structure, with a solid buildup and the backtrack of the other vocals gives it a slight 80’s feels, especially towards the end. My favourite part of the song is the chorus because of the lovely vocals. It sounds like the vocalist is reminscing about a past love or moment with a significant other, making it sound light but at the same time bittersweet. The instrumental with its electric keyboard-sounding beat sounds very melancholic while still sounding soothing. Overall, it’s a really great song, and sounds a lot more concise and consistent than “Solo” did.

“It’s An Accident” is a lot more upbeat than “In The Car,” in terms of tempo, and but sounds slightly melancholic. It has a similiar sound to other songs without the acoustic 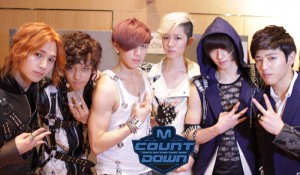 guitar. It has a solid bass line that keeps the pace up but doesn’t really provide anything new in the album. I really like that the album has a direct sound and focus, and not a single song seems out of place. But as nice as consistency is, a little experimentation and different styles would be nice.

Overall, the album has a nice sound and the group is vocally strong. The songs sound good, but aren’t remarkable or have something that sets them apart from the rest yet. They have potential and hopefully Yedang Entertainment will give them some great and interesting songs in their album. Other than a lack of change, the album was a solid effort and I enjoyed the songs, even though they weren’t exactly the most memorable of songs. So I give this album a 4.5/5 for its consistent sound, good pace of songs and clean production. But, could they, like A-Prince, come up with a different name? They basically ostracized every coulrophobe–including myself–out there, especially with the clowns at the end of their MV. Those were terrifying.