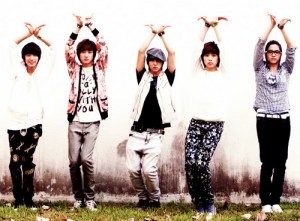 Every wave of comebacks introduces new styles and techniques that revamp the K-pop dance scene. With 2012 wrapping up, it’s safe to say that there have been a few choreography trends that definitely stuck out – the most notable being the dubstep dance break, which was introduced in HyunA’s “Bubble Pop” in 2011 and later on added to what felt like every single of 2012. Another trend that continued in 2012 includes the insertion of American hip hop dance crazes in group choreography and mini dance solos. While these two trends are probably the most noticeable, I think my favorite ingredient of this year’s K-pop choreography has been the increase in fancy footwork. Instead of just focusing on our favorite pelvic thrusts, this year’s music videos have started zooming in on the feet more as boy bands switched up their routines with some smooth shuffling. Let’s look back on some examples:

The first example that really caught my eye this year was U-KISS’s single “Doradora.” While the parts with footwork were brief (taking up about 10 seconds of the entire video) the various camera close-ups on the members’ feet throughout the video made it clear that this was a move worth noticing. And I really appreciated the way the shuffling was placed in the choreography: Having a close-up on one member shuffling his feet and then zooming out on the other members circled around him following suit made it seem like the dance move was being introduced to the other members as well as the viewers themselves, which I thought was a clever way to draw attention to it. Also, the quick and pristine movements definitely added some spice to what was one of U-KISS’s slower dance tracks.

“To You” by Teen Top

A great example of fancy footwork this year has to come from Teen Top’s “To You,” whose choreography combined with the slightly retro feel of the concept made the whole thing seem slightly reminiscent of Michael Jackson’s shuffling in “Billie Jean.” My absolute favorite part had to be Changjo’s dance solo where he uses a combination of intricate footwork to almost effortlessly move across the stage. Teen Top’s extremely smooth and sleek foot movements definitely complemented the overall more sophisticated sound in a way that the amount of crotch grabs in “Crazy” or pelvic thrusts in “No More Perfume On You” just didn’t. And while I love me some pelvic thrusts, I definitely appreciated the attempts at making Teen Top look slightly classier than their normal boyish bubblegum pop concepts.

Something that struck me about this year’s Super Junior single was that the choreography didn’t have catchy hand movements the way that “Sorry Sorry” and “Mr. Simple” did. Instead, “Sexy, Free & Single’s” most memorable dance movements involve footwork that is even echoed by stomping sounds in the actual audio track. You can spot some shuffling in the prechoruses around 1:01 and 3:26, which even features a close-up on Eunhyuk’s feet similar to what is seen in “Doradora.” And like Changjo in “To You”, Eunhyuk has a solo line where he almost prances across the stage with his intense footwork, though it’s toned down a bit in live performances. Even Leeteuk whips out a little shuffle in his line at 2:18, which I think definitely worked with his “Sexy Sexy Sexy” going on in the background (though that might just be my biased attraction toward Leeteuk talking).

And last, but not least, the most recent example of intricate footwork comes from C-Clown’s new release, “Far away…Young Love.” The footwork in the introduction of this video had the same effect as the footwork in “To You” in terms of complementing the sleekness of the scene already evoked by the minimalist color scheme and the sheen of the dance floor. The mini dance solo at 1:35 also involves some footwork, though it is a little less refined than that of Changjo’s and Eunhyuk’s. I personally think fancy footwork would’ve worked way better as the main dance move than the awkward jacket dance they do in the chorus, but alas I am not their choreographer.

So there you have it, my favorite fancy footwork of 2012. There are probably some other examples of choreography that features these sleek shuffles, so feel free to share your favorites!