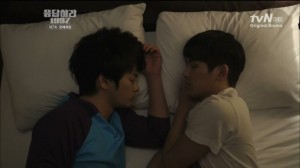 With the Olympics done a whole slew of K-dramas debuted last week equating to a K-drama lover’s summer dream come true. For those of you not K-drama inclined, there was also: a new couple on We Got Married–actors Julien Kang and Yoon Se-ah, Two X debuted with “Double Up,” Vixx wants to “Rock Ur Body, U-Kiss released the PV for “One of You” their fourth Japanese single, rookie boy band E7 debuted with “U,” JYJ‘s Junsu (aka XIA) released his new song “Uncommitted” which he sings completely in English–kind of, and Lee Byung-hun and Lee Min-jung have confessed that they are officially dating.  tvN‘s new hit drama (by cable standards) Answer Me 1997 and I have a love/hate relationship going on right now–love the show, hate how frustrated it’s making me because right now it’s leaving me with more questions than answers.  The good news is that when it was said that the drama had 8 episodes it meant like 8 weeks of episodes with two mini episodes per week, so we’re only half way through the drama.  I was one of those thinking last week’s episodes were the end and was like “WTF kind of ending is this?”

What 5 things in K-pop happened last week that I think were a little bit more special than the rest? Keep reading to find out and if you’re not up-to-date on your K-pop, stop reading now because there are TONS of spoilers ahead.

5. To the Beautiful You

SM Entertainment‘s interpretation of the Japanese manga classic Hana Kimi is…. actually not bad (although Genie High School? You’re killing me on that one SM).  The acting isn’t the greatest ever, but with an idol packed roster were you expecting award winning performances?  I was just hoping for a fun and wacky rom-com that lived up to its predecessors which To the Beautiful You is doing a pretty good job of so far.  There’s lots of eye candy and satisfactory performances from its leads f(x)‘s Sulli and Minho from SHINee. Gems are Lee Hyun-woo as Cha Eun-gyeol (the Nakatsu character) who is totally adorable in his role and the cool and suave Seo Joon-young as Ha Seung-ri who is Dorm 2’s leader.  There were a lot of entertaining moments in the first two episodes including what happens when Jae-hee (Sulli) ventures into the boys’ bathroom for the first time and how female idols deal with their diets, but Jae-hee vs. her suitcase was probably my fave moment of them all.  I see a lot of kids suitcase surfing in the near future. If you’re looking for a drama that should be lots of mindless fun, To the Beautiful You is the perfect drama for you.

Brand New Music‘s rookie group Phantom, made up of members Kiggen, Sanchez and Han-hae, finally made their “formal” debut with the song “Burning.” Some of the writers from SB have been anxiously awaiting the trio’s debut after learning of them through various videos, teasers, appearances on their label mates’ (Verbal Jint, Skull, etc.) songs and MVs and the Hite beer CF they performed in along with Kim Yuna.  I can now understand why–love the vocals in the song and the MV isn’t too shabby either.  Phantom has piqued my interests, so here’s to hoping their career continues to burn up the charts and not go down in flames.

Lee Min-ho‘s newest drama of a Goryeo warrior and the ‘divine healer’ he brings through a worm hole from the future was a good watch.  Lee Min-ho is great as Choi Yeong, the Goryeo General protecting his king and queen, but I was less impressed with the rest of the cast including female lead Kim Hee-sun. The drama’s cinematography looks great and the pace of the story is good, although a bit disjointed.  I have no idea where the story is going which may be a good thing, or not, but I’m hopeful that the drama will continue to improve as each week goes by.  In this clip Choi Yeong is unable to keep his promise to let Dr. Yoo Eun-Soo (Kim Hee-sun) return to her home due to a command from the king and he accepts the only recompense he has for not keeping his word.

2.Getting out of the Shadows

BoA released the MV for her song “The Shadow” last week and it’s a keeper.  I liked this song more than “Only One” in the live performances, so am glad that we got an MV for it, too.  There’s just something about BoA’s voice in this song that I appreciate more than some of her other releases.

1.  Ghosts, and gods, and magistrates–oh, my

The biggest surprise of last week’s K-drama debuts for me had to be Arang and the Magstrate.  I wasn’t even really planning on watching the drama, but I’m a Shin Min-ah fan so I fit it in.  The story, although based on an old Korean folk tale, was the most interesting of all the dramas that debuted last week in my opinion.  Shin Min-ah is Arang, a ghost that escaped from crossing over to find out what happened to her and who she is since she lost her memory after death.  Lee Jun-ki makes his first return to the small screen after finishing his military service as the magistrate Lee Eun-oh.  The drama is labeled as a fantasy rom-com and there’s a lot of fantasy intertwined in the story as the lives of our leads are being influenced by heaven and hell itself.  The drama has a great cast which includes Han Jung-soo as the grim reaper, Park Joon-gyu as the King of the Underworld and Yoo Seung-ho as the Jade Emporer/King of Heaven.  This was one of my fave scenes as Lee Eun-oh tries to act like he can’t see the ghost Arang, because he doesn’t want to get involved with the dealings of the dead.