Tahiti or the Don'ts of a Debut 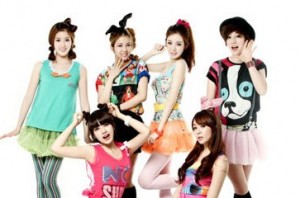 Dream Star Entertainment’s Tahiti is probably one of the most hyped out debuts of this summer. The group consists of six girls: Ji-soo, Min-jae, Jung-bin, Ye-eun, E.J. and Dasom. The members had their show to announce their debut, Ta-dah: It’s Tahiti and after various random activities, plus the compulsory release of some teasers, the first song from the girls is out and so is the video. Now that the presentations have been made, here it goes:

The progression is simple: verses – chorus – verses -chorus – rap – chorus – bridge- chorus. The absence of a proper lead-in to chorus renders the song shorter, with no build-up. Sunk under layers of auto-tune and over-processing, the girls’ vocals (and a big chunk of the music) remain unheard. Although I am not a fan of rap, I cheered for Da-som’s and E.J.’s parts because it got me the opportunity to hear a human voice again. Your ear has to go six feet under if it searches for… well, what could sound like a song. The cringe-worthy chorus doesn’t go near an addictive hook, even less with the girls sounding awfully off. The track itself is a mess that Dream Star spits at us, asking for our mercy since Tahiti just debuted.

The video comprises scenes with the members who escape from a sweatshop to go party. It features rolling your hair around your finger, aegyo, an attempt to a sexy dance, a shopping session and a beach party. Tahiti’s job is to assemble mannequins, but as soon as their supervisor is gone, they take their car and go shopping. The chorus is supposed to be upbeat, but the girls are barely moving. I get it, the song is horrible, but shouldn’t they at least pretend to be confident? They’re static most of the video and the choreography’s minimal aspect doesn’t improve this disaster. The outfits don’t match the surroundings: elegant white lace in a pink-and-blue clothes store or red outfits in a dark grey room?

And if you thought it couldn’t get worse, there’s just one minor detail I have yet to complain about. The supervisor is a middle-aged man who treats them like a boss in the beginning. Take a step back and analyze this: a portion of a girl group’s fanbase consists in uncle fans; the video puts the ahjussi in a powerful position, asserting his dominating instincts over what appears to be his slaves. He’s not though the bad guy, because he gets back with them in whatever garage he’s been keeping them and puts music for them to dance — because he wants them to feel good, not because he enjoys watching, of course.

It would be wrong to assume there’s no saving grace. The listener gets a glimpse at their voices near the ending. It’s not only one member, but most of them who can hold a note fairly well, though I can’t be sure how many since they drown in a robotic voice throughout the song. Also decent, the lyrics speak of a break-up and the members moving on, which aren’t necessarily poetic, but coherent enough and edible. I happen to like the mix of cute and sexy, but I need more to figure out what exactly are they aiming towards.

I can’t say I hate Tahiti or that I warmed up to them before their debut. I have this weird policy whereas, if you haven’t done anything for me as a customer (release music), I won’t care much for your whereabouts. This is just a song I disliked in a sea of disliked tracks, but what really triggered me is how a great deal of debuts head in that direction. If I used to complain about debuts from two years ago, where groups will release the average cookie-cutter pop track, right now, entertainment companies don’t even bother that much. Those debuts at least had members of the group taking themselves seriously and putting out the best they could. The girls serve to me as a bitter taste of the disinterest companies dwell in when it comes to material and also rookies. And why not, the newbies have a lesson to learn. 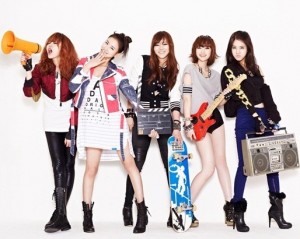 For once, rookies need to step up their game. Standards get lower and lower, which is unexplainable. There are plenty of trainees waiting to bite your head off and make a name. There’s no room to relax, especially if you spend years of your life waiting for the decisive moment in your career. B.A.P. had its fierce image ad groundbreaking musical style. 4K played their acoustic songs. Hello Venus, even with their name, promoted as beautiful girls in an aesthetically pleasing scenario. GLAM were sassy party girls with interesting lyrics. EvoL is set to steal the spotlight.Spica’s R’n’B didn’t convince me at first, but had me impatiently waiting for a comeback. Gang Kiz took pride in being the copycats of T-ara. Crayon Pop had their retro party song. They all had their eye-catching gimmick to pull in viewers, in spite, again, of some of them’s less-than-stellar management. This is the main lesson Tahiti teaches us. Image plays a huge role in the K-popiverse; if you want to debut, no matter if it’s about songwriting, music or pretty faces, you have to bring a touch of originality, no matter how little. Groups twist an old concept and turn it into a new one; despite the overused, rusty scheme, it works because it leaves the fans with the consolation their often times mediocre rookies will do better in the future.

Even more importantly, this debut met a general disapproval because it said nothing. It represented an insult to K-pop fans that have put Tahiti on their nugu-radar. Musically, the song couldn’t be worse. Mind-numbing synths and auto-tune, if wisely used, turns into a party starter and brings a certain edge to a song. Here, it makes up for their unwillingness to sing. You can’t hear their voices and I realized they were singing “Report to the dance floor” in English only after I read a translation. When the video lacked a scene, they put a so-called dance which failed to show who the dancers are in the group. Overall, fans can settle for little, but the sloppiness only proves a complete lack of respect towards your public.

I can’t wrap my mind around what did they want us to understand. Furthermore, what’s the definition of a debut? What’s their version of it? Do they go by the rule that debuts are expected to suck, so let’s save energy and money for the next comeback? Did the company decide halfway through these girls aren’t worth it so they debuted them and collected their things to take off? Honestly, I am clueless and this video left me with more questions than answers. So I’ll just tune in for their live performances and hope I’ll hear them sing. Meanwhile, I just pray for better newbies and get my hopes up whenever I see one. So what do you think, readers? Was it worth a listen?