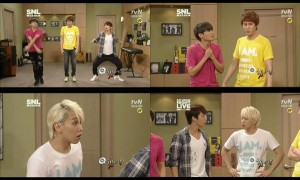 A couple of weeks ago, Super Junior made an appearance on SNL Korea that was fantastic. Sticking to the typical 19+ rating, the idol group, already creeping into the adult-dol category–that is, if they’re not already there–really went for those topics that idols are seemingly “forbidden” from discussing without some sort of backlash.

I was wary of their appearance on a comedy show. While Super Junior members are no slackers at bringing their A-game to the variety field, they’re still idols. Though they agreed to go with the 19+ concept, I remained skeptical. I mean, come on — though Super Junior has simply thrown their image out the window over the years, one would think they’d still want to keep a shred of that there considering their massive adolescent fanbase.

Wrong. They went for it. And it was glorious. From the various implications of sex and pornographic materials to vague touches upon homosexuality and transgenders to brutal academies (SME, anyone?), the group’s skits were worth the watch, not only for the content, but for the acting and the ease with which all the members handled each scene.

In hindsight, when considering that the Western ages of Super Junior members range from 24 to 29, this shouldn’t be something so surprising. They are all more than old enough to publicly joke about such issues. But in the charged idol scene of South Korea, where every group is held to high standards regarding their actions and what they admit to or don’t, where even relationships are kept hidden because of fan backlash that could result in poorer sales, it isn’t easy for any idol group to just come out and do comedy skits of this caliber and material. What makes Super Junior different, and how does that relate to their potential decline, or maintenance, in K-pop? 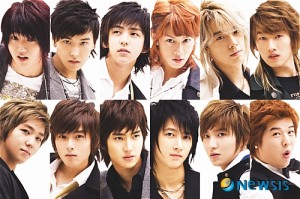 For one, though this topic has been ruthlessly used as excuses among the very determined EverLasting Friends (ELF), Super Junior wasn’t supposed to make it. From the beginning, their mindset has been that of survival, even much more than that of a normal rookie group. For example, when a group debuts, even in the hectic scene of 2012, they aren’t expected to immediately have popularity. Of course it’s mighty helpful if they do, but if they don’t, they have a year and more to keep returning with material until they’re considered a dud. But in 2005, with Super Junior ’05, that wasn’t the case. The group had one year to make the best impression they could, not just as group, but individually since they were expected to use the group as a jumping platform to other areas of entertainment. And it didn’t help that their large numbers created hoards of anti-fans before debut, something that doesn’t happen in more recent days. Because of that survival mentality that has essentially dogged them throughout their now seven year run, the group isn’t going to rest. Once they made it past Super Junior ’05 into Super Junior, it was really time to work towards the top. Once they made it to the top, it’s become all about staying at the top amongst the younger, more musically talented groups. They’re going to continue working hard to stay noticed in order to remain an influential part of South Korea’s entertainment industry.

In addition, since Super Junior was made to be a hodgepodge of different talents rather than a cohesive group that fills in each others’ weaknesses, they’re made for staying power within South Korea. This is arguably the best type of idol group to create for longevity of individual members which could, but doesn’t always, lead to the continued existence of the group itself. Every member has something that they are good at or has contributed something to their family that will probably continue to bring them prosperity. There’s a strong variety line with Leeteuk, Shindong, and Eunhyuk, though all members are also very capable of holding their own in a variety show. There are the main vocalists–Yesung, Ryeowook, and Kyuhyun–, actors–Siwon, Donghae, Kibum (though he’s been aloof for a while)–, and musicals–Sungmin (along with others). Heechul is the powerful personality, and Kangin was a strong variety personality prior to his comeback. As Kangin eases back in, his voice, both musically and opinion-wise, will surely return as well. 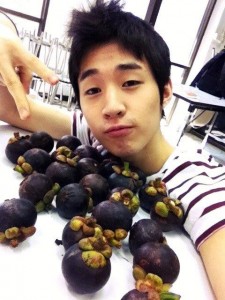 Even Super Junior M members Zhou Mi and Henry have been involved in their own Chinese drama and Thai movie, respectively. And all members can easily take on other roles or fall into more than one category, i.e., Kyuhyun the vocalist and Radio Star MC. The argument could even be made that Super Junior is following in Shinhwa‘s footsteps in terms of longevity and continued relevancy. Both groups have members that regularly take on roles outside of music. They still put out music as a group. They both do well in variety.

It would be difficult to point out an idol group that is still together right now that has anywhere close to this amount of expansion and success, not just musically around the world, but domestically, in such a manner that Super Junior is a household name. In particular, Super Junior’s variety image is influential in keeping the group’s name in the mind of others. This lets the group not just continue creating albums, but maintain their stable presence within South Korea, especially as K-pop isn’t what the majority of the population listens to. It’s easy to forget that South Korea also produces a wide variety of music outside of K-pop, just like any other country, as shown by the music conquests on charts of solo artists like Kim Bum-soo and Nell. K-pop is the most visible internationally because of its changing focus, but that’s a whole other topic for discussion.

So despite their music that perhaps receives more accolades than it merits, Super Junior can remain if not on top, then at least near the top. And it’s because their music doesn’t have to stand on its own. It has the full force of talent in multiple areas behind it. I’m sure many saw EXO‘s large group size and felt that a replacement for Super Junior had arrived. Many speculated that Super Junior was now going to slowly decline, especially as members enter the army. But I’d like to propose this thought: even if Leeteuk is going to the army at the end of the year, Kangin came back. 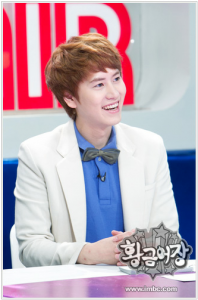 Next year, someone else is most likely going, but they’re getting Heechul back. Whenever members leave from this point on, there is always someone coming back in the same year. And while some members have more fans than others, you can still bet that fans will be willing to give them all a warm welcome, despite the development of K-pop in that time period. The group will still be able to put out albums because of their large number. Roles held by members that leave for military can be filled by other members, like Kyuhyun taking Heechul’s spot on Radio Star and Sungmin and Ryeowook keeping Kiss the Radio a Super Junior production. And EXO? They really only promote as units of six due to their design. It can be argued that they do perform on stage together as twelve, but their choreography and the part distribution are made for six and expanded or duplicated for twelve. They can’t achieve the intricacies of choreography or allow every member their vocal spotlight as a naturally large group can. They are a separate entity from Super Junior that should be viewed as a new group bringing a new image, not a new group rehashing an old one.

And let’s talk appearance, since it’s such a large factor of K-pop. Rookie groups are young. They generally have a boyish air and pretty features. It takes time for them to develop that air of maturity that Super Junior members have, that immediate appearance of an adult rather than an impressive adolescent. For that reason, the groups have fans that are looking for different aspects in appearance or can appreciate both spectra that the groups provide. Because let’s be honest; if we put side-by-side EXO’s Kris, Chanyeol, and Kai with Super Junior’s Siwon, Kyuhyun, and Donghae, there are very different impressions. While all have their strengths physically, if I had to choose, I’d spring for Super Junior any day. And though that changes per person, the fact that there is such a strong difference felt between the presence and aspect of these idols speaks volumes about how younger idols still have to grow to compete with more-established ones. 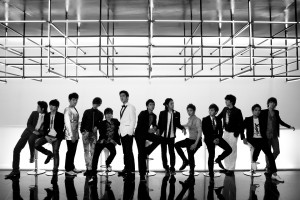 Perhaps the real key here is that Super Junior is famous for being famous. On any show, ahjussis can bust out an imitation of “Sorry Sorry” because, like it or not, that song really did start to bring international attention to K-pop, and everyone knew it. Because of that, Super Junior is well-known by all ages, even appreciated to an extent because of that first move by the group. Though they don’t necessarily produce the best music, you just have to look at their physical album sales to know that there is a dedicated fandom willing to support their continued existence as Super Junior. And though ELFs can get out of control, just like any other fandom, the fact that Super Junior has managed to amass such numbers around the world that have such dedication to the group speaks to their personalities and hard work.

Though Super Junior’s music isn’t anything spectacular–though “Sexy, Free & Single” was a long-awaited improvement– the group isn’t on the decline. They’ll continue to remain relevant as long as all the members continue to do what they’re doing: everything. And as their recent Strong Heart appearance showed, they still have stories to share, people to please, and the determination to do it.