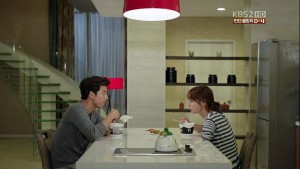 The end of July brought us the some sad news as U-Kiss‘ AJ announced he would leave the group temporarily to attend Columbia University and we had controversy as Nichkhun got in an car accident after a couple of drinks  and T-ara exploded the Twittervers which led to the dismissal of Hwayoung. In better news: Davichi released the song “Do Men Cry,” Skull and Haha released “Busan Vacance,” A-Prince said “You’re the Only One,” Boyfriend released a short PV for their Japanese release of “Be My Shine,” B1A4 debuted on Hello Baby Season 6, IU released the OST for the animated movie Sammy’s Adventures 2, Loen Entertainment‘s artists’ collaboration Loen Tree released “Sea of Moonlight,”  Tahiti made their debut with “Tonight,” Infinite released the PV for the Japanese release of “She’s Back,” and we were teased with more glimpses of SM Entertainment‘s Hana Kimi remake To the Beautiful You.

We also saw the beginning of the  2012 Summer Olympics in London which led to a bunch of cancellations of our favorites shows.  So that meant no ending of A Gentleman’s Dignity yet, no Music Bank, and no Running Man this week–I wish it had meant no ending to Big–because I, like many other K-drama fans, thought the ending was a tad disappointing. What 5 Things happened in K-pop last week did I think were a bit more special than the rest? Keep reading to find out, but beware if you are not current with your K-pop, spoilers most definitely will ensue.

FNC Music‘s new girl group AOA (Ace of Angels) have piqued my curiosity. The eight member group has a whole background story of being angels that have come to Earth because of their love of human music–it is a bit much, but nothing extraordinary in K-pop. What has gained my interest is the fact that they also play instruments, so I’m wondering if they’ll be dancing most of the time or will they be jamming on their instruments in some performances.  The title track “Elvis” off of their debut album Angels’ Story is a good start to their career. It’s not the best debut song I ever heard, but it’s not bad either and with the support of their FNC sunbaes including a song written for them by Yong-hwa, I look forward to see how their career unfolds.

On the last episode of Invincible Youth Season 2, 2PM‘s Wooyoung visited the farm. Wooyoung challenged Boom in a game where they had to try and put on some halmoni pants without using their hands. You can imagine what kind of shenanigans ensued.

There were some great performances on this week’s Inkigayo including PSY doing “Gangnam Style” with Sistar, After School, and Kara‘s Nicole and Hara as backup dancers. I will have to pick BoA‘s performances of “The Shadow” and “Only One” featuring Taemin as my favorite performance of the night though.  BoA also performed “Only One” this past week with Yunho so it was a tough choice, but I liked the performance with Taemin better–it might have been Yunho’s hair.

In light of the 2012 Olympics in London, we missed out on a bunch of our favorite shows which were cancelled due to Olympic programming.  Never fear though, with the cancellations also came the specials, including the always fun and competitive Idol Olympics. My favorite portion of the show was the ping pong, or if you prefer the more ‘proper’ table tennis, playoffs between the mixed teams of 2AM‘s Changmin and f(x)‘s Amber and T-ara‘s Jiyeon and 2PM‘s Nichkhun.  Maybe more important the the match itself, although it was an enjoyable watch, is that this might be the last time we see Nichkhun on TV for a while following his unfortunate car accident.

I think most K-pop fans have come across a video or two of teenage guitar virtuoso, Sung-ha Jung while perusing YouTube trying to satisfy your K-pop addiction–it’s how I first came across his music.  The soon-to-be sixteen year old has been a hit on YouTube for years now and has held concerts around the world.  On this week’s Yoo Hee-yeol’s Sketchbook, he played the song “Irony” for the audience and his playing is just awe inspiring.