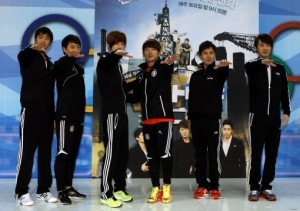 I find it to be a painstaking task listening to some of the newest rookie groups who’ve speckled the K-Pop landscape like sugary frosting. And not because they’re bad. Not at all. I’m just a lazy person who’s scared of change. I can’t stand the thought of having to memorize the names of all the members, familiarizing myself with their quirks, and learning the lyrics to their songs. It’s a terrible facet of my K-pop commitment. However, as difficult as it is to try out rookie groups, it’s just as difficult for me to check out some of the older groups. I sometimes get the sense that some of the earlier K-Pop music won’t translate very well into the context of 2012, sort of like how a person from 2012 would feel baffled after listening to a Backstreet Boys album from 1997. It’s just different. It’s for this reason that I never gave Shinhwa a chance –I didn’t think I would be able to relate to their music.

Of course, I’d heard of their legendary status in K-pop. They were the guys who’d stuck together for 14 years and managed to solidify themselves as the variety idol kings. But before I even knew about Shinhwa, I’d discovered Eric. I’d first watched him in the chaotic drama Spy Myung-wol and quickly identified him as one of the only redeeming assets of that drama. I just about fell in love with his acting and went back several times to rewatch the way he delivered specific lines and acted out detailed body language. He was a blast to watch. I quickly learned that outside of dramas he also had a strange yet entertaining personality. He posted photos of himself perched on a bathtub, proposing to a stuffed bear, and playing golf while dressed in a golf bag. He quickly shot up my list of actors in terms of charisma and pure entertainment.

But just because Eric was the new rock star of my K-drama life didn’t mean I was interested in checking out the group he was the leader of. Even after their comeback single “Venus” released, I put the song on the back burner, thinking I’d get to it after finishing my list of other songs and groups to listen to first. Of course, a few months passed and I still hadn’t gotten to it. Not until one day when I was in a funk because I’d finished watching all my subbed Running Man episodes and had very little else to do. One of the other Seoulbeats writers suggested I watch Shinhwa Broadcast. And by “suggested” I mean practically counted all the ways in which I was missing out on some of the most entertaining variety moments of this year and if I didn’t watch them then I wasn’t a human being. So I tried it. I figured that if anything, I’d at least have Eric as some much appreciated eye candy.

The first episode was alright. It featured the six members as they awkwardly tried to get used to being back on variety television and having their own show to boot. They dressed up as superheroes and wandered the streets looking for citizens to play kai bai bo with to complete their missions. They battled 7 ft. 1 MMA fighter Choi Hong-man who played the super villain, and ended their day tired yet satisfied with the filming. It was fun, yes, but I wasn’t hooked like I’d been told I would be. 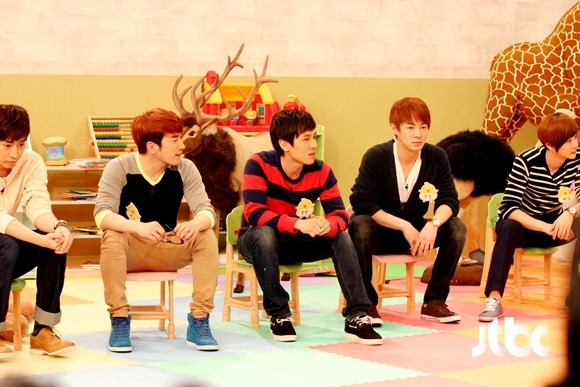 A few days later, I gave it another chance. I watched the second episode. And this was the one that got its claws into me. The members were instructed to take cameras and film themselves during their personal moments. It would give them the chance to bring viewers into their private lives. And they took on that request quite literally. Min-woo took a lengthy video of himself showering with a pair of sunglasses on, Hye-sung filmed himself cooking food for the guys, and Eric shared a video of his small niece in America doing a cute dance for her uncle. The format of this episode was much more real in that it really gave viewers a chance to get acquainted and reacquainted with the members of Shinhwa. It’s what made it so much easier for me to shed a few tears (okay, a lot of tears) some episodes later when the guys finally held their first concert after many years. Their parents surprised them by showing up on stage and their fans who’d waited for them for so long filled the arena. It was heartwarming. 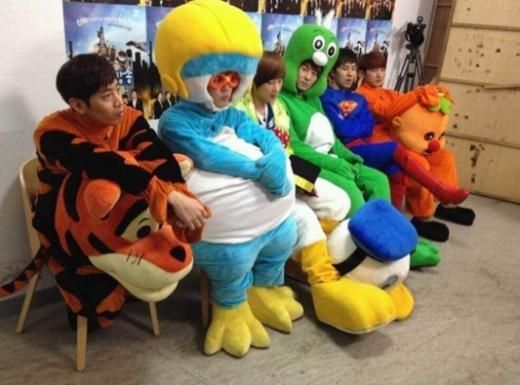 But what got me hooked wasn’t just their relationship with their fans but also their relationship with each other. Even as a newcomer you can sense the bond between them built after years of performing together. And they don’t just express that bond by constantly hugging each other and kissing each other’s faces (although they surely do that too), but also by their ribbing and honesty when it comes to other members. For example, when Eric was asked who he wouldn’t want to be out of all of the members he answered quickly and with no hesitation “Hye-sung and Dong-wan.” Hye-sung because they’re totally different people and Dong-wan because he just doesn’t like Dongwan. These are the kind of jokes that not many idol groups could pull off (or even attempt) because they don’t have the long history and relationship that Shinhwa has.

Shinhwa Broadcast is my variety crack at the moment. I can’t get enough of Hye-sung’s terrible hosting skills, Eric’s aggressive “boing boings,” zombie Andy‘s maknae blues, Jun Jin‘s variety wit, Min-woo’s fashion forwardness, and Dong-wan’s potty mouth. And although Eric is what ultimately brought me to Shinhwa, it’s Min-woo who’s stolen the title of top dog in my Shinhwa notebook. You really start to fall in love with these variety veterans. In fact, I’ve grown so fond of this group that I actually did go back and listen to “Venus.” It’s my summer jam now.

For those of you who haven’t watched Shinhwa Broadcast and thus have no clue what I’m talking about, I (like Ambika before me) absolutely recommend watching it. It’s fun, ridiculous, and entertaining. It reminded me that it’s always beneficial to take a chance on something unfamiliar. I’m glad I took the time out for Shinhwa.