To all the Junsu fans out there: man, how upset were you when you didn’t get to see Junsu in Elizabeth? If you’re anything like me the answer is upset enough to seriously consider a bout of plate-smashing. I was quite prepared to fly to Korea to see Junsu get his platinum-haired Death on, but no matter — we got the MV spin-off. 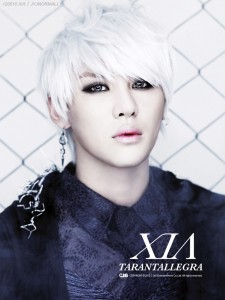 “Tarantallegra” is the first single from Junsu’s solo album, which will be released on the 15th. The song features guest rapper Flowsik and mixes bursts of instrumental strings with bass-heavy electro. Due to Junsu’s fame as one of K-pop’s best vocals, many might have though a ballad would be a safer choice. But at the same time, this is one-third of JYJ — and if he would rather not croon to the camera about eternal love then I am certainly not going to complain. It’s not like his talent is going to waste either. It’s a very repetitive song — the “what music would you listen to?” could be cut down a fair bit, although I understand how its frenzied repetition might add tension to the song.

Many of you might be wondering where you have heard the song title before. Well Potterheads, you were not wrong; “Tarantallegra” is indeed the name of a spell from the Harry Potter books, is a “jinx used to force another person’s legs to begin dancing uncontrollably.” Draco uses it in the second Harry Potter book during his duel against Harry. And suddenly Junsu’s blonde hair makes perfect sense…

…but back to the MV, Muggles. The title matches the song’s intensity, from the fashion, to the lighting, to the dancing. Remember that cute little faux-magnae with the dolphin giggle? Well, if he hadn’t before, he’s definitely grown up now.

In essence, this is just a dance MV. But what a dance MV this is, with its multiple sets, multiple costume and multiple sub-concepts under the general gothic one. The chemistry lab-esque set is particularly good. However the multitude of changes on the MV meant there were bound to be weaker links. The snow scene looks like a cheaper fill-in, reminding me of Neverland by U-Kiss. The overall feeling in insanity and destruction is heightened by the frantic camera angles, but the dance sequences are filmed in a way that makes his skill and the skill of his back-up dancers obvious. I’ve already seen a lot of “MAMA”/”Mirotic”/”Keep Your Head Down” comparisons floating around the internet, but this MV has a feel of its own, something darker. 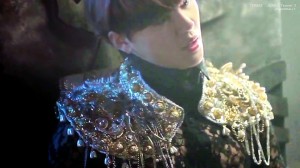 The fashion is really where the MV hits its stride. “Goth” is word being used to describe his outfits but while there are very strong gothic elements, such as the long leather trench coats, there’s a touch of baroque in the elaborate jewellery. The orange hair was sailing very close to a catastrophe, but the eyeliner made up for it. The androgyny of much of his and his male backing-dancers outfits made an interesting contrasting to the ladies’ fierce image.

Ever since the news that Jeri Slaughter and co. of Christina Aguilera and Mariah Carey fame were on board, the anticipation for this dance has been sky-high. Junsu almost meets these expectations — the dance break at the start is clean, focused and while it’s not at “Intoxication” levels of touchy-feely, it’s still pretty sexy. My favourite bit is when he puts his arms behind his back. It’s not original but I wasn’t expecting it and it works perfectly with the possessive creepiness of the MV. The one problem with it is the female dancers. 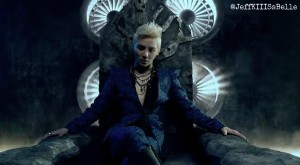 On one hand it’s great to see a variety of ethnicity, in the MV. But at the same time there was so much unnecessary sexualisation of the women.  In one of the teasers she crawls in front of him like a dog; something I would expect to see in a low-budget wannabe hip-hop video. The fact the men can embrace being more feminine and the women are built like actual dancers not bedazzled lollipop sticks is something I wholeheartedly embrace and applaud. But the fact these incredible powerful-looking women are submitting in a way that adds nothing to the video really irks me. Seoulbeats has mentioned before the clear difference between the way foreign women are treated in comparison to Korean women and this showed in this MV. Or did it? Does the fact that all the Western dancers male and female alike, and Junsu himself, behaved erotically cancel this out? But those scenes were just so unnecessary to the MV, and more dancing and less… stroking could have made it stronger.

Love it or hate it, “Tarantallegra” is an undoubtedly powerful MV, and one that makes a lasting impression. Junsu can emote with the best of them; he’s just spent a couple of months doing it onstage as Death so the MV poses no trouble for him.  The quality of the MV, as well as the thought put into every aspect of it — technical, set design, costume, make-up — makes the MV more like a photoshoot at times. It’s a work of art and no mistake, while retaining the fluid power Junsu masters with such conviction here. Some parts of it (the video cameras for instance) seem a little disjointed and the MV takes itself a little too seriously at times. But nevertheless it’s a beautiful MV that reinvents Junsu in a way I didn’t he was capable of, and bodes very well indeed for the rest of his solo break.