A few weeks ago some friends and I headed to downtown Los Angeles to catch the highly anticipated CN Blue and FT Island joint concert.

While the show itself blew me away, it was the absolutely electrifying energy coming from the crowd that made the experience so much more memorable. I was struck speechless by the sheer amount of people who attended the show and even more astounded by the diversity. Men, women, blacks, whites, Indians, Latinos, Asians—everyone was there representing for K-pop and singing along to lyrics in a language that was mostly foreign to them. At the risk of sounding terribly corny with a side of cheesy, I was proud to be a K-pop fan that day because I truly felt that it represented a global community united through the love of a specific kind of music.

Some weeks later, CN Blue released the MV for “Hey You.” And the pride that I felt that day dissipated. Yeah, it was that dramatic.

I’d like to assume that “Hey You” was supposed to be set somewhere in the West. And why do I assume that? Not gonna lie…It might have something to do with the exclusive all-white cast they used in the video. It was almost as if CN Blue was shouting to viewers, “Look at us! There’s white people in our video! We’re in America!” If there is one thing I learned about watching Korean music videos and Bollywood films, it’s that Caucasian people always signify the Western world. And all jokes aside, what about the huge melting pot of folks that bought tickets and attended CN Blue’s show in Los Angeles? Why were they not represented in that Western-set video? And why do they continue to be left out of music videos that seem to be trying to appeal to a global audience? Needless to say, I am broaching upon a sensitive topic so believe me, I’m treading lightly. 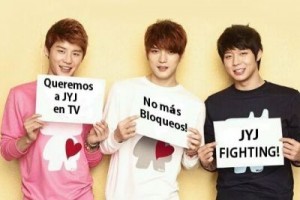 It’s not uncommon for K-pop artists to use foreigners in their videos. After all, the very essence of the Hallyu wave is to share Korean culture with people abroad. K-pop has continued to expand throughout Asia while gaining more and more popularity in the United States and Europe. JYJ recently performed in South America to huge fanfare. Music Bank‘s trek to Paris saw a full house. K-pop has been around the world more frequently than Kim Kardashian has been around the block. So why is there such a limited view of the Western diaspora? And why do K-pop music videos equate “white” with “the West”?

To some, it seems almost frivolous to cast foreigners in music videos. Why go out of your way to cast foreigners when there’s hundreds of Korean actors and actresses just itching to be in a K-pop video? But I disagree. I think there are legitimate reasons for non-Asians to be featured in K-pop music videos. Notice I wrote “legitimate reasons,” not “good reasons.” First off, the idea of foreigners is trendy, cool, and allows music videos to stick out from the pack. Within a saturated music industry, record companies want their videos to have some element of jarring. Secondly, K-pop uses non-Asians to behave in ways that are considered out of the norm. More on that later. And thirdly, they appeal to a broad global audience. 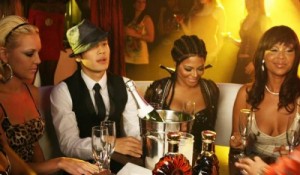 But I don’t buy the idea that K-pop’s casting of foreigners actually increases “global appeal.” For one, the videos don’t represent global diversity. Sorry, CN Blue, but an all-white cast in your video doesn’t make you global or diverse. And remember when Se7en introduced his song “Girls” on 106th and Park with Lil Kim? African American viewers didn’t rush to go out and buy Se7en’s albums just because a black woman was featured in the video (in fact, I’m 100% positive that Lil Kim only scared most black people away from the song, but that’s neither here nor there). So the idea of using foreigners to appeal to foreigners doesn’t seem plausible. Personally, I started listening to K-pop despite the fact that the artists looked nothing like me. The appeal was there even without the familiarity.

Although I don’t fundamentally yearn to see more African Americans like myself (or any other ethnicity) in K-pop videos, it still grinds my gears when those videos portray the Western world as a homogenous society that’s home to only one kind of person. And when it comes to this particularly sensitive topic, no one quite pushes my buttons more than the Hip Hop kings themselves, G-Dragon and T.O.P.

Ah, G-Dragon and T.O.P. The men who, ironically, made me fall back in love with Hip Hop. The guys whose swags are, as Kanye West would say, on a hundred thousand trillion. When K-pop fans offer up groups they think have crossover appeal for success in the U.S., these boys (and their Big Bang bretheren) usually top that list. But while they have such broad appeal overseas, it’s almost as if only a certain kind of Westerner appeals to them. And I think that’s the key: what are the perceptions that Korean artists (like GD and T.O.P.) have about the West and what are the perceptions they have about Caucasian people, particularly women? 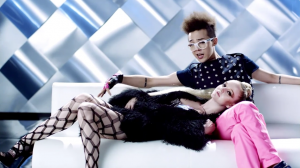 When I used to watch a ton of Indian films, I noticed that many white women were used in scenes that were overtly sexual. They were portrayed as the antithesis to the virginal, traditional Indian woman. It’s a trend that I’ve also seen in K-pop. The guys in the music videos touch foreign girls more intimately. They’re quicker to go in for the kiss (and no, not the K-drama pseudo-kiss). The girls are expected to do things that are perceived to be normal behavior for a girl from the West.

This same hypersexualized behavior is considered inappropriate for Korean girls. Western women are sought after in music videos, but usually end up representing heartbreak, infidelity, and an overall dysfunctional relationship. It’s an awkward double-edged sword where Caucasian women are obsessed over and glorified, but are also demeaned and a lot of times disrespected in several forms. Check out U-Kiss‘ “Shut Up” MV if you think I’m kidding. I mean, honestly, the song is called “Shut Up.” SMH.

In regards to the lack of diversity in K-pop videos, I’m not asking that K-pop take on the daunting and noble task of bringing together all people of different creeds and representing them all in their videos. Lord knows American and European entertainment have diversity issues of their own. But as a person of color who loves K-pop and knows a myriad of fans who love it as much as I do, I do ask that K-pop acknowledge that fans in the West–the same ones who buy their concert tickets, albums, and merchandise–represent more than just one demographic. And that when they do start showing more diversity, I hope they realize that the stereotype of foreign women as overly sexual is not a flattering one.