All Together Now: Exploring Fanchants

According to the Oxford Concise Dictionary, a chant is:

“A spoken sing-song phrase, esp. one performed in unison by a crowd etc.” 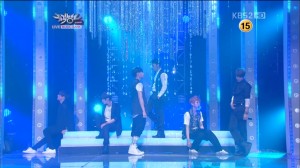 (Urban Dictionary offers a slightly different explanation: An obese man who lives with mother and plays online game” — perhaps an article for another day.) Regardless, chants are used all over the world, from Benediction monks to sports fans. It is a way of uniting a group and can be extremely powerful, able to whip any number of people into frenzy. Not surprising then, that it has become such a staple part of K-pop.

Recently in K-pop chanting has found new life. These days it’s rarer for a live performance not to be dominated by an almost perfectly in-sync chant. The idea has been around for a while, in in 1998 Fin.K.L video there is some, although not nearly to the extent say a KARA performance might have. But it’s definitely not a newer phenomenon; for instance if you compare a 2002 Shinhwa performance to their more recent “Venus” promotions the difference isn’t that huge. The 2012 version has a little less random screaming and more military precision than the 2002 version but in theory the idea took root a fair while ago, and in the last few years has become massively important to fan culture.

When groups used to depend more on backing vocals to enhance a song, now the fans can do it instead; and it seems many companies are writing songs that allow for that. A prime example is miss A’s “Touch,” which has quite a long dance break at the start that the fanchant spices up.

The question is, when does a fanchant start to hinder a performance? Sometimes, for instance during ballad songs there won’t be any, allowing the vocals speak for themselves. But even during more energetic dance numbers the fanchants can overpower the idols. Personally I never liked the name calling at the start of Beast’s “Fiction” as it ruined the emotional atmosphere the boys were trying to create.

Even worse, it seems to encourage individuals to show their appreciation in less… dignified ways. This fanboy got a little overexcited at a SNSD concert and practically took over the performance. Now, it’s great that fans can have the confidence to show their love, and it was pretty funny. But I would not be pleased if I paid to see these girls and was interrupted by him. Not to mention how off-putting they must have found it. On the other hand, it’s an uncommon occurrence and besides, that’s serious voice projection he has there.

When I first joined the “big, happy, if slightly… dysfunctional… family” of K-pop (if you get the quote reference you get a picture of your idol of choice) my only brush with fanchants came from watching football (AKA soccer) on television. Mass chanting is most commonly seen in sport — if you go on fanchants.co.uk you can find loads of British, American, European and even Korean football songs. However err on the side of caution if you don’t have headphones as they tend to be rather more… vulgar. For example after Johnny Doyle was killed in his loft whilst repairing some electrical wiring the song “It’s My Party (and I’ll Cry if I Want To)” was sung, with the lyrics changed to “it’s my attic and I’ll fry if I want to.” Perhaps more topical is the fact many Korean football players are heckled with the likes of: 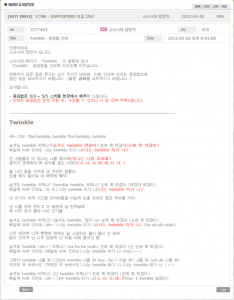 Bear in mind that was written for him by his own fans. Rugby and soccer chants can be equally offensive, it seems racism and sexism are given a pass for the sake of a good rhyme. Although it’s easy to take a step back now and judge, there is something thrilling about knowing you and hundreds of others are doing more than just cheering or singing along, and that you are enhancing the performance. Most fanchants do this, and so idols must feel incredibly pleased the fans love the song enough to want to contribute to it. They add to the live performances in a way that can’t be captured in the studio and it shows new brand of dedication besides just glowsticks and screaming.

And it is dedication. Either the companies release the chants and the fans have very little time to learn them, or they must write the chants themselves. The chant is released onto fan cafes, fan clubs and after the first performance, even onto YouTube as subs. These chants aren’t just used on the likes of Inkigayo or Music Bank; you can hear them during concerts around the world, from Thailand to Paris. Even though I have never been to a K-pop concert I still find myself muttering particularly catchy chants to myself, and really feels, in a small way, that you are part of something. The rise in fanchant popularity has a lot to do with the speed at which we can now communicate and the various ways fans can interact and share information, thanks to increased social media sites.

Another question is how likely is it that the West will pick it up? If you listen to the recent SM Town Live concerts, the fanchanting is mainly drowned out by American fans acting as they would at most Western concerts. There was some in Paris but so far it has been mainly a Korean activity. Lack of coordination and organisation could be a factor, but considering the aforementioned sporting chants it’s likely that while Western fans are perfectly capable, it’s simply not something that is done. If an audience started a chant for a British band I’m pretty sure most of them would stop the gig and ask what on earth is going on. For the K-pop idols it might be hard adjusting to the lack of chants, but as overseas performances have shown, the absence doesn’t harm the show, it merely adds a new flavour to them. Besides, either the chants would all be in English or all live videos would be tainted with the valiant mangling of the Korean language as we attempt to get our heads around the official chants.

At first I felt like fanchants sucked the life out of performances. K-pop groups are often criticized for the lack of spontaneity in their dancing and repetitive execution — the robotic chanting only adds to this, but it’s not like the cheering makes it any less exciting. Fanchants, when properly executed and allows the idols to take centre stage are a great way for the fans to show their appreciation, and as far as I’m concerned they are here to stay. What is your opinion: Nuisance or aid? And while some of JYJ‘s South American concerts have hinted at its popularity, will the trend make the transition to the West?