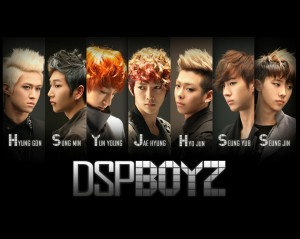 DSP Media‘s newest boy group, A-JAX, released a pre-debut single, an intro, on the 14th of May, intending to introduce the group’s talent to an awaiting audience. If you hadn’t heard before, A-JAX is planning on debuting in Korea and Japan at the same time, already having signed with Japan’s Universal Music. They also have their own reality show, Making the Star–DSP Boyz, which intends to make the group familiar to their audience.

The single here is titled “Never Let Go” and features labelmate KARA‘s Goo Hara as the main actress. It seems to be a trend for 2012 rookies to release some sort of track beforehand: B.A.P‘s Bang & Zelo unit with “Never Give Up,” EXO‘s “What is Love” and “History,” NU’EST in “Love Letter” from Happy Pledis, and now A-JAX with this single. It seems strange to call a song that isn’t their first a debut single, but that’s for a whole other article. Take a look at the MV below:

This music video is purely storyline. This may not have been the best move for a group that has yet to debut–it may have been better to at least incorporate individual shots as to familiarize the audience with the members, even though they do have a reality show. But this set-up also allows for the vocal abilities of A-JAX to be showcased, as opposed to judgments based on appearance or charisma. Nonetheless, it is pleasing to see a rookie group have a legitimate music video rather than just a dance MV, especially when many other already established groups tend to forgo the story aspect.

From my understanding of the lyrics and the video, Hara plays the role of the person singing the lyrics. She is the one who can’t let go of another person. The initial scene with Ha-ra bound by ropes that cross the room made me think that she was the subject of the affections of the singer at first, but her actions later on in the MV suit better the role that the singer expresses. In that vein, Hara is bound by her inability to let go of her affections for another. She’s stuck in her past memories, which are portrayed through her placement in front of a bleak television, a conductor for past memories. As the lyrics say, since she only knows this past person, she has a limited understanding of anything else, including how to move on and get over this person. 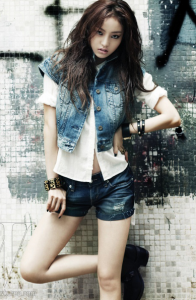 The distress of this person leaving and the subsequent inability to move on has driven Hara into an addled state. She fixes toys with a disposition that is both childlike and mature. But she ends up toppling the newly fixed toys later, indicating a the presence of a potential manic-depressive disorder. Similarly, she tries to present a drink to a large stuffed animal, topping it as well when it proves incapable of holding the drink as a normal person would. She continues with manic behavior, such as searching magazines for desired clips to paste on the wall and also slips back into remembrance of this person of the past, which usually incites some sort of erratic or angry behavior. It seems that she’s able to be productive when she isn’t thinking about this person, but many of the things she does remind her of this person, making it difficult for her life to progress in any manageable manner. The end result of this behavior is a woman that is deeply scarred, both mentally and physically, as shown by the marks on her body and incredibly stricken face. The only way to escape this state is to leave it permanently. It’s suggested that she commits suicide, though the water fully engulfing her face isn’t actually shown.

The cinematography of this MV is done particularly well. The set is all indoors, even the areas that seem like they should be outdoors, such as the room with sand. The lights are mostly kept dimmed, especially in the first scene, immediately giving the video a haunting feeling that pairs well with the music. As the chorus erupts, the scene starts to have clipped edits and flickering lights, showing the desperation in her actions and the instability of it all. The last scenes are the darkest, fitting to the destruction that occurs and the tragic ending. Also noteworthy are the little edits throughout the video that changed the color filter or saturation of the scene. They were little ticks that added elements of drama to the already interesting video.

Hara plays her part well as a disturbed, doll-like woman. In one scene she’s focusing well on rebuilding a robot, but in the next she’s kicking the sand like a child. Her eyes display an appropriate range of emotions, from an almost blank stare to sharp bursts of anger to finally and understanding in her eyes that is unexpected. Another aspect that was well done occurred near the chorus line while Hara was taking apart magazines and papers. Her styling is also notable. In some scenes, she wears almost fanciful, princess-type clothing to display doll-like qualities. In others, she has a boyish bowl-cut that reduces her to appearing like a child. In the last scenes, she’s in more mature clothing, displaying that she is a fully grown woman that can’t tolerate what her life has become any longer. I haven’t seen Goo Hara act before, and I was impressed with how well she did with this role. It was also a good choice to choose her as her look is similar to that of a doll. 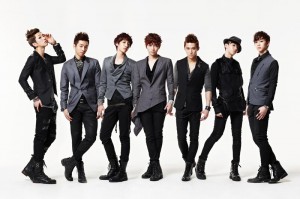 This music video does a excellent job of melding the message of the lyrics to the actions portrayed, providing fodder for both the eyes and ears. While the message speaks of love or a relationship, a typical subject, this song and music video take the issue to a higher level by complicating it with the downsides of infatuation, obsession, or heartbreak. The haunting and expressive vocals clearly displayed the ability of the boys. The music begins with a single instrument, only to build up in the first minute to the outburst of the chorus, which then included dramatic gong sounds or clock bells, continuing the haunting feeling.

A-JAX’s MV was impressive, although it was shorter than the actual song. It incorporated sets that suited the obsessive characteristics of the song and compounded upon the eerie feelings of the music by creating matching visuals. As such, I give this MV an overall score of 4.1/5. I’m not in a position to judge the performance of the members as there wasn’t one, but all other aspects were of above-average quality, especially for a rookie group. A-JAX appears to be a group to watch out for once they make their debut.

What do you think? Did the combination of A-JAX and KARA’s Goo Ha-ra captivate you? Let us know in the comments!