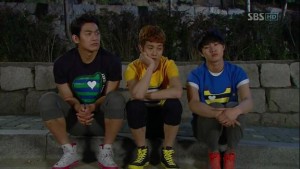 It was a great week for fans of K-pop in the continental US as there was the SM Town Concert,Google’s free K-pop concert, and Jay Park‘s APAHM concerts.  For those of us who weren’t as fortunate (hey K-pop peeps, Hawaii is a great place to visit for a concert),  this is what we had to look forward to: INFINITE made their comeback with “The Chaser,” Baek Ji-young wants a “Good Boy“–wait I thought she already had one, C-REAL said “Sorry but I, ” legendary ballad singer Kim Bum-soo had one of the longest teasers ever to say that he wants to be a “Rock Star,” Ulala Session “Didn’t Write It,” Dalmatian made their long awaited comeback with a trip to the “E.R.,” LeeSsang found it “Hard to be Humble,” and the JJ Project got the “Bounce.”  Queen In-hyun’s Man brought some great moments and the Rooftop Prince brought some makjang.  If you’re not up to date on your K-pop turn back because spoilers will ensue, if you are read on to find out the 5 Things that happened in K-pop last week that I thought were a little more special than the rest.

On the last episode of Dancing with the Stars Korea  Season 2, SNSD‘s Hyoyeon and her partner Kim Hyung-suk selected a tango to Britney Spears’ “Toxic.”  They brought the sexy and had Tiffany, who was in the crowd showing her support, blushing at all the skinship.  Hyoyeon has said that it’s an adjustment getting used to all the skinship when dancing, and Hyung-suk gets props for being able to keep his professionalism ecen while having a member of SNSD wrapped around him. The pair took first place of the night and they are definitely one of the couples to look out for winning Dancing with the Stars Korea Season 2.

It was part two of Immortal Song 2‘s tribute to Park Jin-young, and while No Brain put on an awesome reggae version of the Wonder Girls‘ international hit “Nobody” and Ailee won the night with JYP’s “Don’t Leave Me” it was Ulala Session that made a lasting impression with their interpretation of Park Ji-yoon‘s “Adult Ceremony.” The boys of Ulala teared up the stage with moves that would do any idol proud and a performance that had the crowd up on their feet.

3. G.O. gets schooled on Running Man

The boys of MBLAQ (minus MIR) were secret guests on the latest episode of Running Man along with SISTAR and the game mastermind Park Ji-sung. G.O. tried to do a sneak attack on the cast, but Kim Jong-kook was quick to show G.O. why he’s the sunbae.

Loved G.O.’s little hissy after getting out. He wasn’t the only MBLAQ-er to get taken out fast as the boys proved to be little competition for the Running Men who eventually found their prize.

After doing some emergency facial treatments for Uhm Tae-woong‘s sun burn, the cast pf 1N2D Season 2 play some games and I haven’t cracked up this hard since… the last time I watched Shinhwa Broadcast.  The cast went on to play the “Suck and Blow” game with some sheets of paper and it’s best to watch the hilarity for yourself.

They also played a game with face masks that is a must for your next sleepover with your girls… or guys.

Right?!! It has to be….  This week’s episodes was all about Eun Shi-kyung as he becomes the pawn between the King and the wanna-be evil cookies king.  Jo Jung-suk in his role as Eun Shi-kyung had some great scenes this week as he learns that his hero is flawed, he calls out the King–by name, and he says goodbye to the princess… man to woman.  So much good in the second to the last week of the K-drama which wraps this week with episodes 19 and 20.  Here’s my fave scene of the week, it was soo hard to pick, which is when Eun Shi-kyung finds out why his father was fired from his position and has to deal with the information that his father who he tried so hard to strive for perfection for, was actually human like everyone else and made mistakes–big ones.