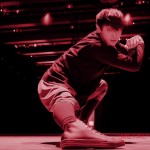 23 teasers, 2 prologues, and a showcase later, EXO has become the most anticipated rookie group(s) of 2012. SM Entertainment decided to think outside of their box and went crazy in promoting their new 12 member boy band. Though they haven’t even officially debuted, they’re already gathered a sizeable fan base.  When SM did start releasing their teasers, I really didn’t pay attention, but then they started releasing more and more teasers, most of them featuring SM golden child, Kai. I admit, I was skeptical about this group but that changed with the release of “What is Love,” which somehow warmed the cold thing generally referred to as my heart. I was still snarky, but it was out of love.

So on the eve of the EXO showcase on March 31st I was beside myself and today I am here to bring you my review of this EXO Showcase, specifically the Chinese one. I will warn you, in order for me to cope with the excessive fan-girling I have a built in mechanism of intense snark to prevent me from turning rabid, so be warned, there lays a long road of sarcastic commentary ahead.

I knew that they would perform this song as one but I was very curious as to how they would overcome the language barrier and how they would merge the choreography. I am pleased to say that the combined choreography flowed well and they pulled off the meshing of the Chinese and Korean versions together into one song. This arrangement did a good job of highlighting both groups and merging them into one. The beginning of this song threw me off slightly with the strobe lights, rapid hand movements, and the horrendous wardrobe choices.

Alright SM, I understand that the world economy is fragile right now and is still recovering but why is it that you felt the need to make these outfits out of curtains and odd bedspreads? I swear I saw Chanyeol’s pants at my local Bed, Bath and Beyond as a bed sheet. 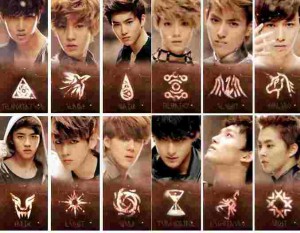 This song is just as cracktastic as DBSK’s Tri-Angle. The music video teaser looks insanely cheesy but it appeals to the inner sci-fi/fantasy nerd in me. The teaser showcases all these random powers the members have, ranging from Time Control to healing powers. Kai also continues his video-bombing as he teleports into his fellow band-mates’ shots. I will also have to give SM a cookie for bringing the members outside and away from the box. However, I’ll give it a year until the EXO members are back in the box, it’s a rite of passage for SM artists. Also note to SM, Luhan’s power is identified as telekinesis not telepathy, two completely different superpowers.

The actual performance of MAMA is great. The song is full of weeping orchestral elements, heavy bass, and robust vocal lines. The choreography for this song is epic with a lot of exaggerated movements. The formations are well done taking the size and distribution into account. It was also high energy and a good performance overall.

This song is a classic Young Yoo-jin R&B track and I love it. Kai executes the dance smoothly but he needs to stop with all this aggressive crotch grabbing. I could make this into a drinking game, taking a shot every time he does a pelvic grab or thrust. My liver would fail by the end of the showcase if I played that game.

In which Tao waves his stick around and performs some nifty Wushu moves. I would have enjoyed it a lot more if he wasn’t wearing leather pants with tassels on them. Tassels belong on rugs, curtains, and graduation caps, not on leather pants. They completely distracted me from Tao’s performance because I had this urge to cut all of them off.

At this point I should probably stop with all the wardrobe commentary but what the F is Lay  wearing? Exo Boxers over pantyhose? SM, I can’t even express the utter confusion I feel at your wardrobe choices. At least Lay danced well, he definitely outshined Xiu Min and Luhan, but those two weren’t too bad themselves.

“Baby Don’t Cry” was the song that solidified my love for this group. This is song is so beautiful and they performed it with such emotion, making the song a lot better to watch and listen to. Luhan and Chen‘s version at the Seoul showcase was as good. SM, you will have to face my wrath if you do not release the full version of this song. Be afraid, be very afraid.

It was a good performance and I liked how the stylists went with the contrasting black and white ensemble for the two boys. What I did not like, however, was the dead woodland creature on Chen’s shoulder. The rest of his outfit was very simple and clean but for some reason they thought adding roadkill to it would some how enhance it. It didn’t. 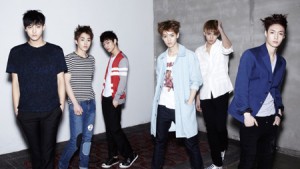 You can train an idol to dance, you can train an idol to sing, you can make an idol pretty with plastic surgery but no entertainment company can train an idol to have swag. It is something that must come from with in you. Kris and Chanyeol have attractive, deep voices but they look awkward and lost on stage. They attempted to engage in the audience and look cool but it ended up flat. Lay and Kai were flying around on stage like Mexican jumping beans but the rappers? You guys did not ‘roll like a buffalo’, I am quite disappointed.

This was hilarious. All of the other members got to perform in a teaser of some sort but Suho instead got a montage with pretty piano music playing in the background. It’s not as if he’s useless — he is the leader of Exo — but that doesn’t make for an exciting performance. So what is the logical course of action? Let’s stick him in a marsh and have him read a book, throw in a couple pictures while you’re at it too. SM your logic never fails to amuse me.

Nothing too exciting, just some more dancing and Kai’s chest makes another appearance. Sehun gets his time to shine, but you better watch out, Kai might steal your shirt and dance with it.

I enjoyed this extended version of “Into Your World,” as the slower tracks featured in these teasers are of high quality. The begining is the same as the 23rd teaser with most of the Exo members dancing. Chen, Luhan, Xiu Min, and Lay sing the Chinese version. There isn’t much to say about this performance other than the fact that it was well done and I anticipate the full version. Also, the outfits aren’t as offensive to the eyes in this one.

Here is the English-subbed Q&A session at the Chinese showcase. Sehun again is all up on Luhan thus providing more fodder for the crazy HunHan shippers out there. Ever since DBSK split up, SM doesn’t have a shipping (aka Yunjae) they could hardcore promote until now, but that’s just my theory. As for the questions asked? They were really standard and safe questions. I have compiled a list of the questions that we all know should have been asked. 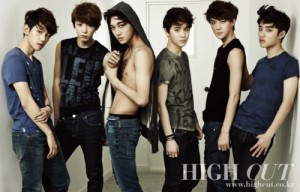 Unfortunately those questions will never be answered and will forever remain the mysteries of life, kind of like the Bermuda Triangle.

Overall the Chinese showcase was interesting to watch, although only a couple of the performances were extra-ordinary. The EXO Showcase in Seoul was much grander and more hyped but the content was essentially the same, some of the arrangements mixed up in order to adjust to the language differences and such. I as an EXO fan enjoyed it, and the showcase reminded me of a concert almost.