How to Succeed in K-pop: Girl Groups

Last time I discussed common elements of boy groups and if you had a couple of young Korean males hanging around you could create your very own.  Here at Seoulbeats we are all about equal opportunity so this time I have compiled a list of elements you would need in order to succeed in K-pop but this time it’s for the ladies.

For vocals, dancing, and rapping please refer to the previous post. There might be minor changes such as making sure all your girl group members sing at least a half octave higher than they usually do, instead of shirt-ripping the main dancer will be doing ‘sexy body waves’, and talented rapping is again optional. The variety show element again applies to the ladies as well but now onto becoming the next goddesses of K-pop. 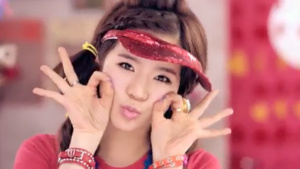 While aegyo is important for boy groups it is absolutely mandatory for girl groups. Aegyo plays a larger role in a girl group as it also appeals to uncle fans. Granted there are ajhumma fans with boy groups but we don’t hear about them as much as ajhussi fans. These older males will be important for revenue and sales seeing as that they are the ones with the cash, they’re also here to protect you and send you little trinkets to show their protective fatherly love. All you need to do is wear some school girl uniforms and act as cute as possible. Use ‘Oppa’ as much as possible, stamp your feet cutely and puff your cheeks like a chipmunk.  Making hearts with your hands are also really good too. 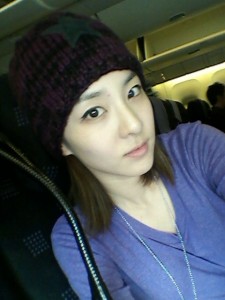 First get a Twitter account or some sort of equivalent, such as a me2day. Then post as many pictures of yourself doing anything; eating, sleeping, shooting a music video, anything. This is also a good way to amp up your aegyo-role. Puff your cheeks and take a picture, and don’t forget to put some sort of emoticon like “^^” or ‘Kekeke’ and you’re set. You’ll have the  fans falling at your feet at that very moment. You can also use this opportunity to display how amazing your skin is by posting bare-face selcas in which you wear no make-up and still look like a goddess. Good lighting is essential in these situations and if you have the right amount hitting you at the right angle, it will bathe you in soft light making you glow,  thus earning the love of fans everywhere…and their jealousy too. If you can take selcas with other girl group members making aegyo expressions-they don’t necessarily have to be from the same group as you-in order to double the cute, do so as much as possible. 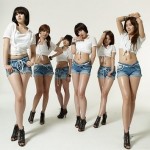 Show as much skin without actually showing too much skin. That means you need to work out as much as possibly to get that perfect S-line and show off your long legs. It doesn’t matter if you develop a bad sense of body image, as long as you look good your self-esteem is not that important. But be careful, you can’t be too revealing with your outfits, just enough to sell sex without actually looking like you’re selling sex. If you can get sailor suits, bunny ears, or any sort of outfit that can be fetishized it’s even better. 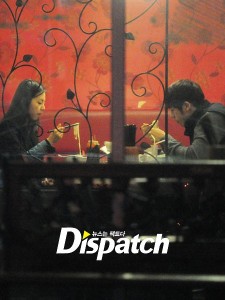 No way should the public know about you having any sort of romantic relationship, until after you have reached old maid status which is 30 in K-pop. Until then even if you do fall in love with the most perfect man in the world, he must be a secret. However, in order to keep yourself in the public eye a minor scandal will be necessary.

Nothing too scandalous, maybe a photo taken of you and a mystery man at a coffee-shop, and it is later revealed that mystery man is your brother. Or maybe you caught at a restaurant with a popular male celebrity but release a statement re-affirming the platonic friendship which involves no romantic feelings. Unless you’re already loved by many, like Sunye, then I suggest keeping any sort of relationship especially if with a male idol on the down low.

Now that you have all the elements that are needed to become successful in K-pop, I hope to see you on the stages of Korea strutting and showing off your talent. When you do become Korea’s next new love affair, please don’t forget to credit Gil and please send any of the single male idols my way.