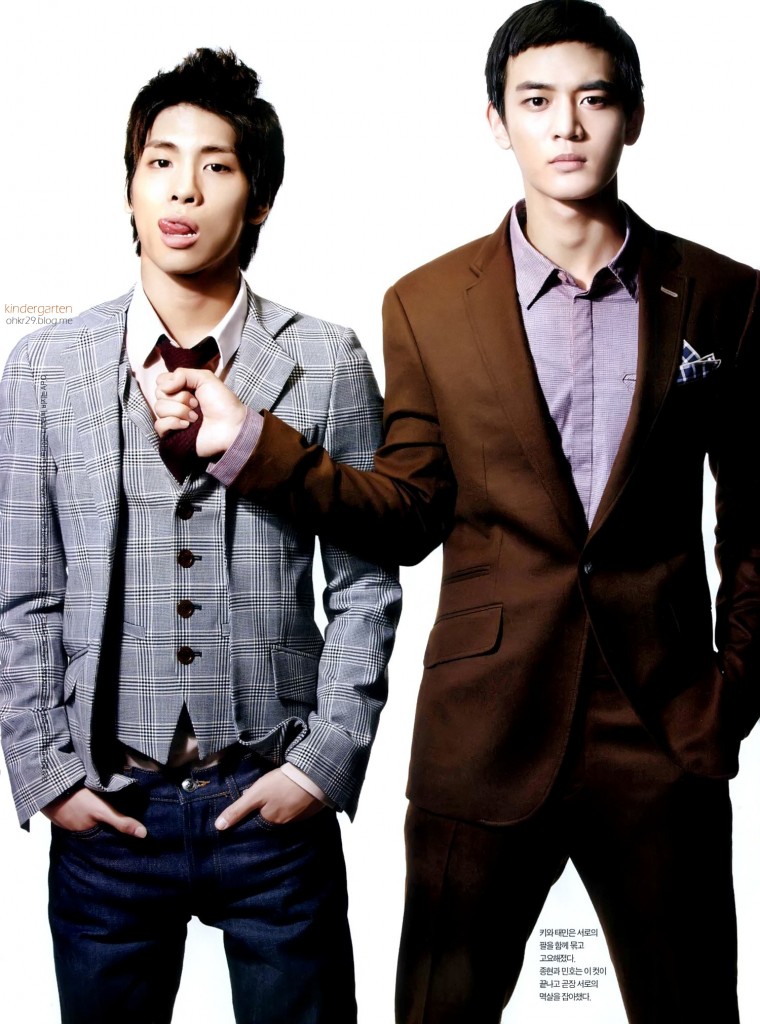 March looks like an active month for K-pop. We have Big Bang making a comeback after a long hiatus, the 1st generation idol group Shinhwa is coming back, EXO is supposedly debuting this month, and SHINee is releasing a new mini album after a year and a half. Shawols around the globe are on freak-out-fangirl-mode, which is understandable since these boys have not released a Korean album since 2010. Consequently, the K-pop sphere exploded when SM announced that SHINee was coming back in March with a new mini album called Sherlock.

As an avid BBC watcher when I thought of Sherlock I thought of a Victorian era theme. I was expecting the SHINee boys to come out with top hats, tailcoats, and a pimping cane but apparently SM had other thoughts in mind. When Minho‘s teaser picture was released I almost died of a heart attack. Not because of excessive fangirling, but because of the fear that the FBI might knock down the door and arrest me for child pornography. I don’t want to go to prison.

SM Entertainment, just because your company name has the letters S and M in it does not mean you should go for an S&M concept. First with the neon underwear in Super Junior Mr. Simple’s teaser pics and now this? WTF are you guys doing? When we said we want a more mature and adult concept for SHINee, we were not asking for erotica. I was expecting some classy suits and smooth R&B tunes, not a shirtless Taemin. 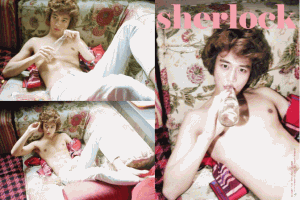 The first set of photos we are graced with feature the ever so lovely flaming charisma rapper Minho. Not only is he devoid of a shirt and a proper hairstylist, but that couch. Oh lord, that flower patterned thing would never get within a 50 mile radius of my house but I digress. SM also claims that Minho is supposed to be “… reminiscent of a French boy.” Now, when you say French boy do you mean to say French porn star? Is that what kids call them nowadays, “French boys”?  Maybe because I am not a Shawol or that I have been spoiled by glorious chocolate abs courtesy of photoshop but I can’t seem to appreciate his lack of clothing. Hell, you’re lounging on a shirt right now. Put down the bottle and cover yourself up. 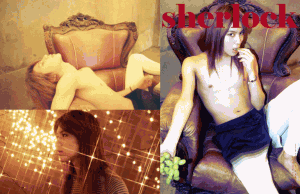 Ladies and gentlemen, the Lucifer hair is back. Unlike Fannie and Megan who have this odd fascination with Taemin’s long locks, I do not share their sentiment. I prefer his short hair but I have this feeling that SM has a personal vendetta against me and is doing everything in their power to piss me off. Examples: delaying Exo’s debut, scarring me with Taemin’s half naked body, teasing me with a Henry/Amber collaboration that will never be etc, etc.  Just looking at those photos I feel violated in the place of Taemin. The picture of him eating grapes is frightening. The poor boy looks starved, I’m sure that grape was the only sustenance he had in weeks. You poor boy, you now have a plethora of noonas who will come after you in crazed fangirl mode.  On a brighter note, I liked the picture of him with all the bright lights around him (pun completely intended). It was well taken and he was clothed. Speaking of clothes, are you wearing shorts over white leggings? 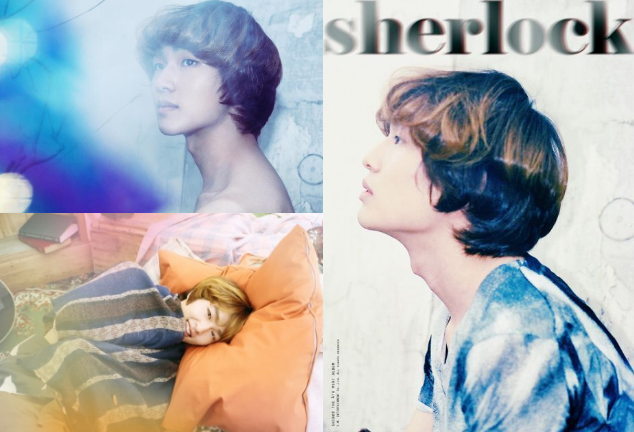 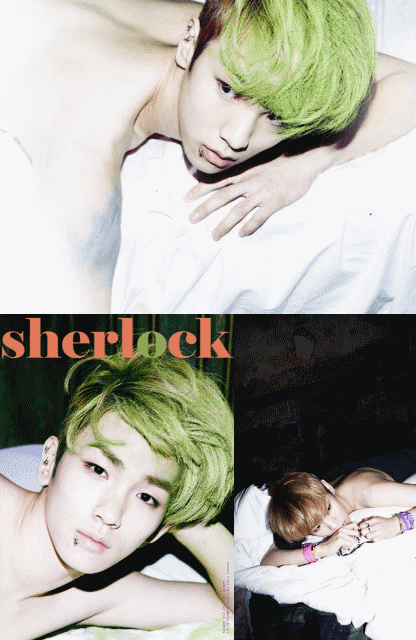 Next up is diva king Key. He also seems to be lacking a shirt: what is up with all of this no-shirt thing SM has going on? Did SHINee suddenly develop a shirt allergy? I have no idea what SM is trying to do anymore. Or are they on hallucinogenics, because  previous experiences lead me to believe the latter. Though Key’s set of teaser pictures weren’t as WTF-ish as Minho and Taemin’s were, I’m trying to understand the motives behind him lounging on a rumpled bed lacking a shirt. What does a crime busting Victorian Era bad ass detective have to do with the French and shirtless Asian boys on beds?

Though lime green is one of my favorite colors, when it is used as a hair dye color the results aren’t always what you envisioned. I thought Key’s hair looked somewhat radioactive and his eyebrows did too. As radioactive as his hair looked, I really liked the various accessories that seemed to adorn his hands and wrists. However, the jewelry on his face are another problem all together. What is that on Key’s mouth? I’m going to assume it’s a lip ring of some sort. When I first saw these photos I thought it was a bug on my screen; it was only when I went to smack a newspaper against the screen did I realize it was a part of the photo. 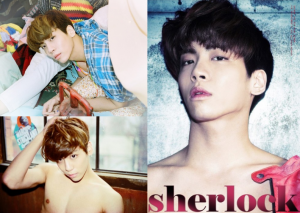 Last but not least is Jonghyun. His teaser pictures seemed relatively normal.The comments lamenting the lack of a mole were thoroughly amusing to read. In this set of pictures, Jonghyun too seems to be afflicted by that shirt allergy the rest of his members have, but he seems to pull it off well.

I do have one qualm with one of the pictures. It is the upper left hand one where Jonghyun is wearing a blue plaid shirt and there is a pair of legs in white jeans next to him. Who do those legs belong to and why are the right next to his face? So many questions…no answers. 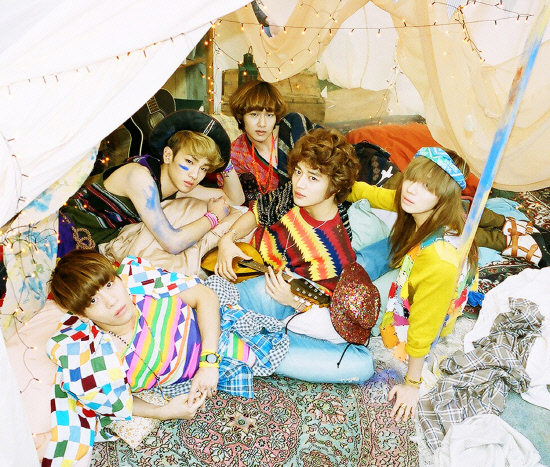 I love this teaser picture, I’m getting Woodstock flashbacks and I’m loving it. This teaser picture does not look like erotica and I’m digging the hippie vibe. Minho is that a banjo you have and a bedazzled cowboy hat? SM, I beg of you please for the love of all things sacred and holy in this world please let the title track of Sherlock  be something like this.That is the only way to redeem yourself from the weird “French” themed photos that Minho and Taemin were subject to. After this teaser picture I am expecting, no, demanding a 70’s acid trip music video.

What made me WTF even more was the Sherlockian versus Shawol smackdown on Tumblr… over a tag. Oh Tumblr is going to be a battlefield come March 21st.

What are your thoughts? Did you go WTF at the teasers or are you reblogging SHINee like there’s no tomorrow? Leave your comments below.