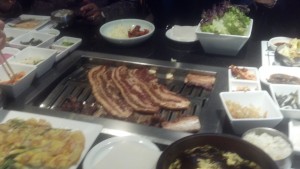 This week in K-pop was a little different for me because I was in Los Angeles pretty much the whole week to attend the F.T.Island and C.N. Blue concert at the Nokia Theater.  It was great being able to visit some places in Koreatown like the Galleria on Vermont, Music Plaza at the Koreatown Plaza,  Bosco Bakery, Paris Baguette, the Cake House, and Park’s BBQ does not disappoint.  I’m totally behind on all my K-dramas because the internet at the hotels I stayed at sucked, but that’s okay because there was a whole lot of other things going on.  What 5 Things did I LOVE in K-pop this past week while on vacation in Los Angeles?  Keep reading to find out.

So I was able to watch the “Fantastic Baby” MV  late Tuesday night at the In N Out Burger on Sepulveda by LAX right after getting off of the plane from Hawaii.  And yeah, mind=blown, but I’m still deciding if it’s in a good way or bad (Oh My god, did you guys see Daesung?  When he flexed his shoulders and his traps popped… I almost died.) But I do think that I like the song better now, which is a sign of a good MV and I did ask for something different. I just also finished watching their comeback performances on Inkigayo and boy, it’s good to have Big Bang back.

You know if Big Bang on Running Man is in fourth place, the top three things must’ve been AWESOME!  Big bang are definitely better as the hunters than the hunted and I can’t believe how fast they took down Ace Ji-hyo.

And I really didn’t really know how hard.  I wasn’t a big fan of F.T. Island, not that I didn’t like them, it’s just I wasn’t familiar with most of their music.  I mainly knew of them because of Lee Hong-ki and my adoration of the K-drama, You’re Beautiful. But the boys do rock and Hong-ki is an amazing lead singer, he’s like the energizer bunny running around the stage and his singing was AMAZING.  And their trying to communicate with the crowd with limited English–was adorable.

C.N. Blue is one of my favorite bands, second only to Big Bang.  So when I heard of them coming to concert with F.T.  Island in Los Angeles, the only thing that made me hesitate to go is knowing that Big Bang would be touring later on this year and how much that would cost to go to.  I decided to bite the bullet and clear out the savings and max out the credit cards if I have to this year and just go to both–and so far it has been totally worth it, the concert was AWESOME.  Next stop, ALIVE Tour 2012… chee-hoo!

1. Up Close and Personal 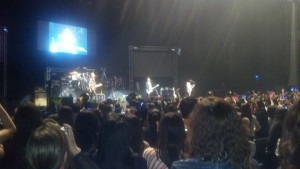 I was staying at the Sheraton Downtown LA hotel with my sister-in-law and aunt Friday and Saturday night for the concert, etc.  I stayed at the hotel last year for the KMF 2011 and knew that the KMF artists stayed there, but only ever saw Sistar and one of the U-Kiss boys.  I stayed at the Sheraton this year because it was familiar and close to the Nokia Theater.  I had heard rumors that maybe C.N. Blue and F.T.Island might stay there, but thought the likelihood was slim because there were hotels right next to the venue that I thought they would stay at.  Upon check-in last Friday, I knew that they were staying at the Sheraton due to fans loitering in the entryway.  I’m not the type to stalk in hallways (not because I’m too cool, but more because I’m not like a teenager and it would be embarrassing), so I didn’t think anything of it.  When my sister-in-law, aunt and I (who all went to the concert along with my friend Keri Ann) were leaving our room on the 15th floor to check out Sunday morning about 10:00 am, all we were thinking about was getting ALL our bags to the car.  We stopped on the 12th floor for other guests, so we took to the corners and when we looked up we saw these five skinny, nicely dressed, and cute Korean looking guys (and one older dude) get in the elevator after doing a cursory glance.

So after a few seconds I realize that I think this is C.N.Blue and their manager, we stop on the next floor, hear a couple of “good mornings” and I look out to see Lee Hong-ki and the rest of F.T. Island outside the elevator (the elevators are small so there was no room for them on our elevator). Me and my sister-in-law start making faces at each other over this guy in a white hoodie between us in the back of the elevator mouthing “It’s them, I’m gonna ask” so she asks them “Are you the guys from the concert on Friday?” (she wasn’t a fan, just came with me to the concert) and they said “yes,” but were all kind of in front of us (aunty was next to Min-hyuk, I think) and when I took a glance at the guy between us something clicked and I asked him “Are you Yong-hwa?” he nodded and said, “yes” and I rushed out “Oh, we came from Hawaii to go to your concert, it was great.”  The boys said some “thank yous” and next thing we know we were at the first floor so Jung-shin and Min-hyuk (I think, it all happened so fast I’m not totally sure if it was Min-hyuk or Jong-hyun) got out of the elevator so that we could get out and then my sister-in-law and I were looking at each other on the first floor with our bags saying “Oh my god, we were in the elevator with C.N. Blue,” “dang we didn’t take a picture or get an autograph,” with mini silent screams, etc.–the 13 year old fan girls inside of us were totally spazzing and we totally called all our family and friends to let them know.

And while everything did happen so fast, it was a conscious decision of mine not to try and take a picture, etc. because I realized it must be kind of tiring to always have people waiting at the hotel and all up in your face, even though that is the life of an idol.  No lie, the recent articles of sasaeng fans were fresh in the back of my mind, too. And while my 13 year old inner fan girl was totally disappointed at myself for not getting a picture, the adult fan that I am was glad that I was able to tell them “hi” and that I enjoyed their concert.