Teddy why did you let this happen?

I know you, Kush and Tablo are the English experts and respected big brothers at YG, so how did this happen under your watch? I bet GD and Taeyang asked for your opinion before hand, so why did you lie? Why did you ever say this looked good? I bet when you saw the final results you and Kush had a good laugh. Well I hope you’re happy.

It is with a heavy heart that I present to you…this. Forget the almost hairless body or nipples that seem to be popping out almost everywhere in K-pop these days. It looks like GD is “High High” again and has been listening to Snoop, Wiz Kalifa and Bruno Mars or maybe Jay-Z? I mean what else would make him get this?

Even though I don’t ever see myself getting one, I don’t mind tattoos. Done correctly they can be some of the most beautiful works of art, but THIS! This right here; GD had to have gotten Taeyang drunk. I’m only semi-surprised with 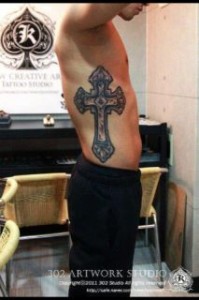 GD’s, but Taeyang’s? Someone alert the media.

Taeyang finally had a drink and not just that, he got wasted. That seems to be the only logical explanation why this would happen. Everything in me hopes this is some kind of sick joke and they’re just taking pointers from the master troll that is Papa YG.

Words cannot express how much I adore Taeyang. He is my ultimate K-pop bias. Beautiful voice, amazingly smooth dance moves, handsome both in and out, and a body that can only be fawned over.

But his state as of late has left me between sheer horror and utter confusion. In “Blue” they had him looking like Siegfried & Roy meets The Village People’s biker.  Now this happens. Whether it’s been the chia pet fertilization of his signature mohawk or the fact that he has been digging through GD’s closet lately, I kid you not, someone has definitely been passing out questionable cigarettes and it looks like Taeyang is the latest recipient. I think so highly of this guy that I often say “God would have been unfair if he gave Taeyang height.” To me he is the epitome of K-pop perfection, but lately I’m not so sure.  This tattoo is so bad, it got me speaking in different languages: shiro, iie, ¿Por qué? Nooooo! This tattoo is so ugly when Taeyang looks in the mirror, the reflection ducks. It’s so ugly when he passes by a bathroom the toilet flushes. It’s so ugly it looks like it got hit with a bag of WTF?! It’s so ugly it hurts my feelings. Taeyangs tattoo is so ugly that if ugly were a crime, it would get him the electric chair. 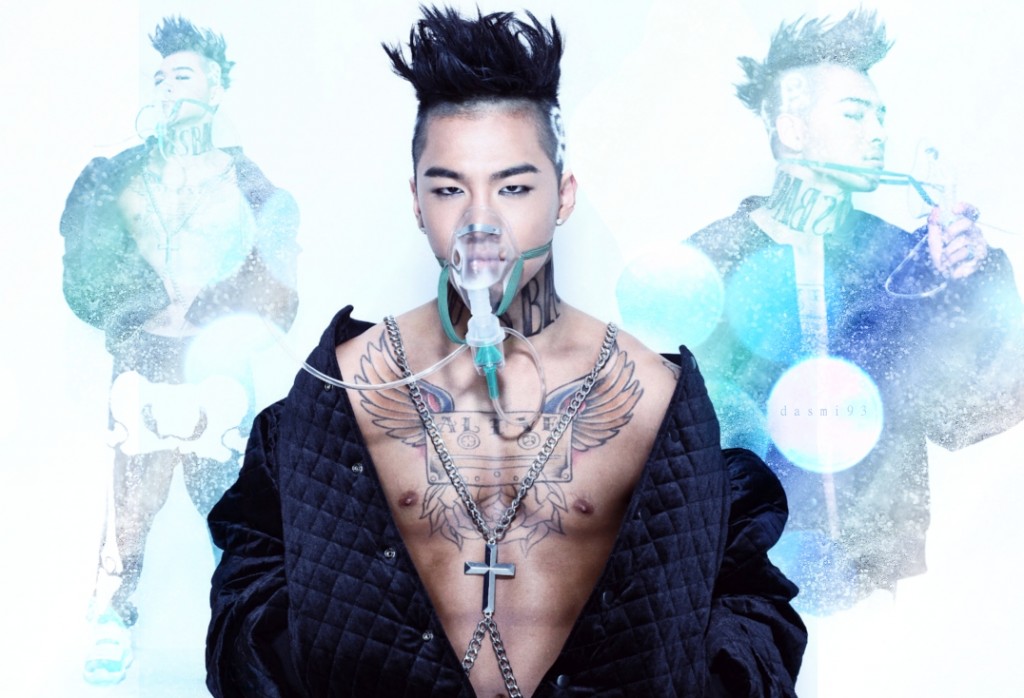 Too late I guess.

I mean that tattoo is so ugly I will pay him to put his shirt back — well, I‘m getting ahead of myself. Taeyang and shirt off were meant to be, but Taeyang, why? I don’t know what it is with K-pop stars getting the most awkward looking tattoos, but this is becoming an epidemic. Just about every of GD’s tattoos are on awkward places. JYJ (or I should say JY) has a myriad of them, Kangin’s unfortunately stuck with a misspelling error and the list goes on and on. Please I plead with you guys, stop the madness! My poor heart can’t take it anymore.