Were Our Hopes Too High for Dream High 2?

I’ll be the first to admit that I adored Dream High. I watched it last January when I was confined to my bed for an entire week, having contracted some sort of strep throat, and loved every single minute of the cuteness, the fluffiness, and the cheesiness. I stayed up consecutive nights to finish that thing, and now that I think about it, that was probably why I stayed sick for so long. I cried when Sam-dong found out that he was going to lose his hearing, “aw”ed over every single Jason/Pil-suk moment, and watched with bated breath all of the dance-offs and sing-offs. Hye-mi’s sassy attitude and Sam-dong’s puppy cuteness made their interactions easy to watch and love, while Park Jin Young‘s antics as Yang Jin-man had me cracking up at every turn. Dream High was one of those dramas that you just had to get emotionally invested in–no matter how many cheesy “You can do it!” lines they threw at you. 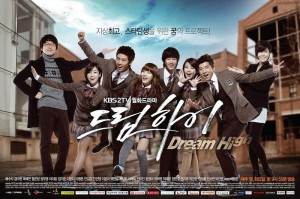 So when rumors were cleared and fans received the news that yes, there was going to be a follow-up drama to Dream High, I found myself on the mixed-feelings boat. I would’ve loved to see the original cast back, but that was simply not going to happen since their stories had been tied up so neatly at the end of the drama. The cast for Dream High 2 was in for a difficult task — filling the shoes of those who came before them. On the second hand, I really did love the main idea of the whole drama series and how the scriptwriters worked in cute moments to counter the more serious moments when they confronted real K-pop industry issues (remember Yoon Baek-hee’s dilemma?). So by the time Dream High 2 started airing, I had decided to see if I could stomach the first two episodes and go from there.

I couldn’t stomach the first two episodes. They were borderline awful, in my opinion. The acting was spotty and even Kang Sora‘s adorable dorkiness couldn’t save JB‘s stoic deliverance of his lines. The plot wasn’t developed enough–it was hard to form any kind of attachment to any character because it jumped from character to character. We saw a little bit of Hae-sung and then a little bit of Rian and then a little bit of Yoo-jin, but no serious character development for any of them. Dream High 2 introduced so many characters in the first two episodes that it left viewers confused and apathetic, which led to many fans of Dream High choosing to abandon ship, with good reason.

I was one of those disappointed watchers. I gave up on Dream High 2, sure that it would just get worse and worse as it progressed. The plot was a hot mess, the acting unconvincing, and the dialogue carried out with so little emotion that I watched most of the scenes with a blank expression on my face, not quite sure how to feel. However, two of my friends stuck with the drama, stubbornly confident that it would get better. I chuckled at that absurd possibility–the feedback to the first two episodes were so negative… how could Dream High 2 get better? 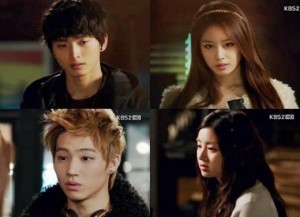 They convinced me to give episodes three and four a shot though, after considerable amounts of badgering and persuasion, and I sat down last weekend to try my hand again at this drama. To my surprise, I got through the next two episodes without having to cringe in pain too many times at the acting and the way the plot was delivered. Sure, it wasn’t on a silver platter, but I saw a glimmer of hope for Dream High 2. It was improving slowly–much more slowly than Dream High had, but it was moving in the right direction. Parts of it were still sloppy, but I saw more potential in our main characters’ stories.

Firstly, the drama had stopped with the extended music-video-esque sequences that they had used liberally during the first two episodes. Perhaps the director realized that it didn’t contribute much to the plot and maybe they should use their hour to develop more important things, but whatever it was, I was relieved. We also got to see a little more of our main characters and less of the secondary characters such as Rian’s group, which helped me establish somewhat-clearer understandings for our heroines and heroes. Sora’s acting has been the strongest out of the four main actors and actresses to me, since the beginning, so I really liked the fact that she truly seemed committed to portraying Hae-sung’s character. However, I felt like the writers could have done a better job writing Hae-sung into the drama, because although Sora’s acting skills are commendable, she has to play a weak character who is difficult to warm up to. With Jiyeon, maybe it’s just me, but I just couldn’t take her seriously when she put on a mean face for the camera. In God of Study, she played a sweetheart who was madly in love with a boy who didn’t love her back, so it was easy to like her character. And sure, I get the appeal of having a mean/vulnerable character in the drama, but her performance just isn’t convincing me so far. I’m hoping that as the drama progresses and her nice-girl side comes out, it’ll help me like Rian’s character a little more. As of right now though, I’m having trouble buying the story she’s selling. 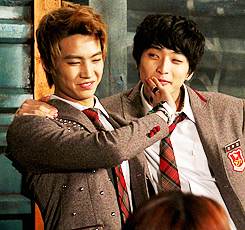 As for Jinwoon and JB‘s performances, they suffer from the same issue that Sora’s and Jiyeon’s do: the character is just not a perfect fit for the actor. Jinwoon’s character, Yoo-jin, is supposed to come off as kind of this talented, angst-filled teenager who refuses to conform to the rules of the K-pop industry, but instead I found him cute during his tantrum-throwing scenes. JB, on the other hand, confused me. I felt like he was supposed to be the coldhearted jerk who later warms up and becomes a total sweetheart, but instead I was sent lurching in both directions at the same time when watching his scenes.

At last, I figured out what the writers were doing with Dream High 2. They took elements from Dream High that worked and threw them haphazardly into a new plot, which sometimes worked and sometimes flopped. There were some enjoyable moments, like when Kahi and Park Jin Young put on a slick dance performance for the students, but for the most part, I was left sitting at my computer with a WTF?! expression on my face.

I’m not saying that it’s impossible to enjoy this drama though. It took some patience for me to make it this far into Dream High 2, and I still have to grit my teeth in annoyance during some scenes, but I’m starting to see the growth of the characters in the story. It’s getting less and less painful to watch each episode, and even though I think that the love triangles are being played out in a very confusing, frustrating way, there are sweet moments between potential couples that are reminiscent of the ones in the original drama.

With Dream High 2, the trick is to not compare every single second to the first season. It’s a given that it’s not going to be as good and I really wished that the writers would stop trying to draw parallels between the two dramas, but that doesn’t seem like it’s going to stop any time soon. However, if you keep in mind that Dream High 2 is trying to establish its own storyline, completely separate from Dream High, it becomes a lot easier to watch and even enjoyable… at points.

What about you guys, Seoulbeaters? Did you give up on Dream High 2 as soon as it started or are you sticking it out, like me, hoping that it’ll eventually reach good-drama territory? 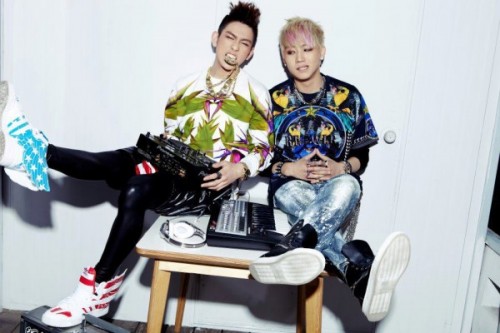