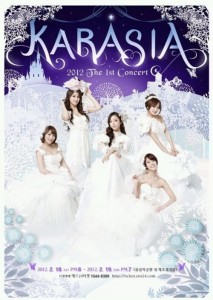 It’s almost an unspoken rule that most idols (if not all) aspire to hold their solo concert sometime in their careers. If anything, having the ability to fill up several stadiums alone is a confirmation of an artist’s success. What’s more, each concert could be considered a small-scale celebration for the fandom. A time when the idols perform for an audience that loves them. It’s no wonder that a solo tour is a big deal and a must for any A-list group. Heck, Super Junior is up to ‘Super Show 4‘.

After five years of toil and gradual uphill climb, it should only be natural that KARA’s solo concert tour, ‘KARASIA‘ would come to take place. The tour should have been a celebration worth five years’ wait with sold-out stadiums and smooth sailing.

But it wasn’t. Not really. 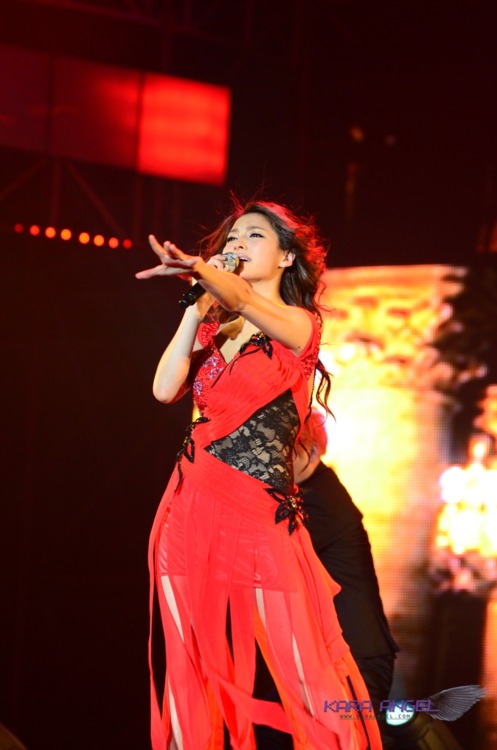 The first piece of bad news came in the form of Nicole injuring her ankle on a moveable section of the stage and Gyuri‘s need for surgery due to the nodules found in her vocal chords. It certainly wasn’t a great start to their first ever solo tour but it didn’t stop them from forging ahead. Nicole continued to attend her various schedules, wearing a brace. Gyuri too, has undergone surgery and is going strong. That wasn’t the end of the rocky road though. While it was never officially reported, fancams and photographs seem to tell the story: KARASIA didn’t fill up stadiums.  Yes, a significant amount of seats were filled up, but still, large blocks of seating were left empty, and that begs the question — have the recent scandals surrounding the girls had a hand in this lack of attendance? Or is this an unbiased reflection on the kind of influence that KARA truly has? Somehow, I feel inclined to believe it is the former, rather than the latter. Like it or not, KARA has established themselves as a significant player in the Japanese market and it should only be expected that any event they hold in Japan should be able to draw large audiences.

However, less-than-spectacular attendance isn’t something that should put the girls off. Of course not; KARA has finally been able to hold their own tour and it’s only natural that they’d give it their all, complete with must-see solo stages. 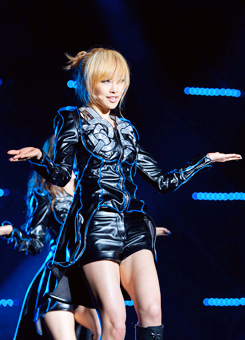 Nicole’s cover of Michael Jackson‘s “Beat It” was one of the first to leak in the form of the classic blurry fancam and while I wasn’t impressed to the point of fainting , it was still a strong performance, and I give props to Nicole for covering it. Truly, watching her moonwalk for that ten seconds before her fall was satisfying to say the least. However, that wasn’t the end to Nicole’s solo ventures — she also performed “Lost” with a so-called “SS502” member, Hyeonkon — a trainee with DSP.

While Nicole’s singing voice isn’t something we are deprived of — nor is it exactly the voice of an angel — it is still quite refreshing to hear her sing. As for the choreography, it’s far from the most creative or exciting performance around but it does the song justice, so I’m satisfied.

Gyuri’s solo performances were deserving of the buzz they received, especially the performance of “Daydream,” complete with a low-cut dress and a fierce latin tango. Admittedly, I have an unofficial list of things I love seeing idols doing — ballroom dances included, which would explain why I loved SNSD‘s Sooyoung‘s performance of “Sway.” Putting it quite simply, the footwork involved in Gyuri’s performance alone was enough to astound me. Her singing, while not the best, is one of the better voices in KARA and her vocals in this performance were a pleasure to listen to. I also happened to enjoy her performance of “Ave Maria” — a song from her musical. Personally, I thought Gyuri’s performances were some of the most engaging.

Seungyeon, like the others, performed two songs. One was her OST song “Superstar” in all its cutesy glory, with animals prancing around her onstage. While it was energetic and engaging, it was her other solo performance that was really impressive. What many people seem to forget is that despite what the producers do to the girls’ voices, they are capable of singing on a lower register. Seungyeon gets the chance to prove that in the beginning of a power ballad, “Guilty”, of which I could watch fancams all day. This one doesn’t display the full performance, but we do get a fair portion of the girl rocking it during the climax of the song (and did I say how much I loved it — wait, I did).

I have always thought that Hara was the weakest singer in KARA. As a result, I was mildly surprised by her performance of “Secret Love.” Her voice is definitely a far cry from industry powerhouses but she manages to hold her own with the sweet pop song. Of course, it is Hara’s performance of “L-O-V-E” that is getting all the attention, if not only for the latin dance number. However, I’d say that her singing was better in the former, though the latter was indeed a performance with much more impact. And well, I guess the controversial choice of costume may have played a part as well.

Jiyoung slides into equal second place (with Nicole) for me, though, with her performances of “Umbrella (Ballad Version)” and “Wanna Do.” The former was the expected, mellow song. “Wanna Do” though, was the solo that come out on top. For one, it’s not every day an idol comes out onstage with a guitar; more importantly though, it was a solid performance. While it may be far from the kind of amazing that earns thousands upon thousands of voices of praise, it’s a very listen-able song, and really, what more does it have to be?

At the end of the day, it doesn’t matter that KARASIA didn’t sell out stadiums. What matters is that the girls gave it their all and put out a handful of great performances. Maybe five years didn’t seem to quite pay off, but KARASIA happened and that is a wonderful gift for Kamilias (even me, who secretly stans these girls).