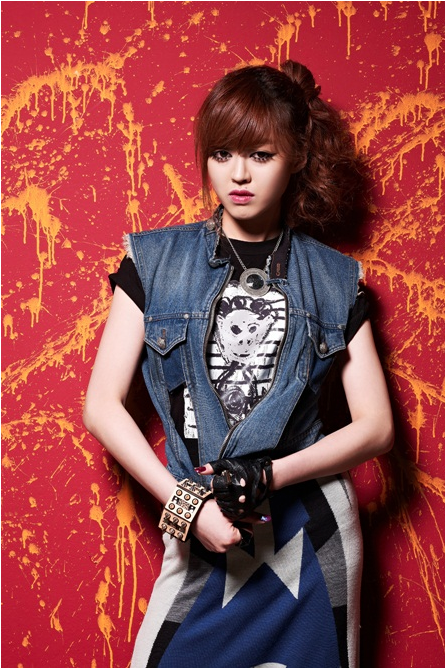 SPICA is a girl group you don’t see too often. Their image so far, is centered around a classy older woman with powerful vocals laced together to create a solid harmony of mature women. Which is in large contrast to the rather sugary, aegyo-saturated pop music of most girl groups today on the mainstream scene. SPICA’s first mini-album Russian Roulette, is packed with songs that introduce a quintet of ladies with a powerful musical presence and a different type of sound. Overall, this debut album is a fantastic look into SPICA’s mature musical character.

I must say, I’m really rather impressed with SPICA. When word got out that B2M Entertainment, the agency that signed Lee Hyori, was prepping a girl group for a stellar 2012 debut, I had my doubts. I very rarely take to girl groups, simply because they’re so predictable, and more often than not, only one or two out of the whole group can actually hold a decent note. But SPICA was one of the few female rookie groups that caught me off guard.

Their pitches were deeper and their music more thoughtful than I truly anticipated–none of the mindless addicting bubblegum you would expect from a group debuting and trying to steal the limelight. The album includes a dance track, the mellow title song, as well as some ballads, which all come together to paint a stunning portrait of SPICA’s vocal variety and capability. My favorite song off the album is “Up N Down” which has a fun beat with a pinch of bad girl flavor, a song that can easily stay on repeat.

The tone of the Russian Roulette album is much more mature compared to what K-pop fans like us are used to, especially from girl groups. The overarching concept can be sourced from the dark and even haunting aesthetics of the Russian Roulette MV, and it ties the girls together with both a strong sound and a fierce image, creating something really quite powerful in presence. I do think however, that SPICA is capable of being a little more intellectually stimulating and symbolic, and can go much farther than labels like ‘strong’ or ‘fierce.’ Especially considering how the girls are not only trained musicians but also know a thing or two about producing and composing.

The Russian Roulette album is a showcase of five vocalists with great depth. Their vocal abilities amplify the message and emotion found in the music, and as a group, their voices stream together harmoniously. Unlike most formulaic groups in K-pop, where the rapper’s parts, the lead vocalist’s parts, etc. are rather distinct and anticipated, all of SPICA is able to contribute to the impact of their music with each of their vocal abilities. That alone is a solid testament to their talent and the Russian Roulette mini-album is a hearty spoonful of that talent.

When I first began watching SPICA, their themes and their vocal ranges reminded me a bit of Brown Eyed Girls. However, I feel like if a rookie groups begins to remind you of a group you’ve already seen, those rookies are treading dangerous waters. As a rookie, you probably don’t want to be reminding audiences of another, more famous group by portraying similar concepts and images. Thus, SPICA runs the risk of falling into mediocrity if they don’t flesh out a raw, consistent image that brings out their unique personalities and makes them pop, similar to how BEG’s raw edginess has come to make them iconic as musical artists rather than K-pop idols. Perhaps the only thing going for SPICA at the moment is their talent and their mature approach to concepts and music, as there appears to be few female rookie groups trying to do the same thing. As rookies their X-factor is bound to be underdeveloped, but we all know what the K-pop machine is like: rookies pop up left and right all the time. If SPICA wants to stand out and make a splash before being drowned out by the hoards of new idols to-be, they need to define themselves. With what, I couldn’t say–I’ll leave that one up to SPICA.

Be sure to check out SPICA’s new debut album, Russian Roulette, and decide for yourself how they stack up against the rest of the rookie competition.