The End of the Monday Couple: Confusing Fiction with Reality 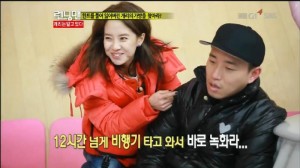 It was a sad day for many Running Man fans when it was revealed that half of the show’s “Monday Couple,” Song Ji-hyo, is in fact dating someone who doesn’t happen to be Gary. While my reaction was a noncommittal, “Well, that’s going to be awkward next episode,” other Monday Couple fans responded much more emphatically. “How could she do this to Gary?” some fans wrote earnestly. Others tweeted to Gary, “Be strong!” Some even went as far as hoping Song Ji-hyo would break up with her current boyfriend (CEO of her entertainment company, C-JeS), and run into the arms of her Running Man counterpart.

But Gary took to Twitter to unbunch the panties of Monday Couple fans who sent him tons of messages to keep his head up, and reminded them that his relationship with Ji-hyo on the show was simply a variety bit.

Did we put in too much into our act? I will work harder now, knowing that there are people out there who care about me enough to tell me to be strong, but no need for that anymore!! There’s no reason to cheer me up. There are others who are more in need of cheering. I’m simply having a hard time looking for my ego haha.

And when that only seemed to fuel fans’ sympathy, he responded again: 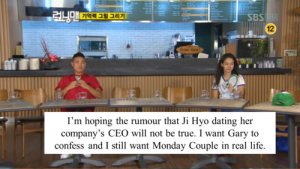 And why did fans react so strongly to the Monday Couple “break up” when there never was a real relationship to begin with? Well, as I like to do when all else fails: blame it on variety television. The Monday Couple was formed during the early episodes of Running Man when the show’s members were just beginning to fall into their designated variety roles. Newcomer Lee Kwang-soo played the position of struggling maknae, Kim Jong-kook grabbed the spot of hot-tempered disciplinarian, and Haha landed himself the responsibility of resident schemer. As for Gary and Ji-hyo, they initially exuded an endearing awkwardness around each other, eventually developing into a storyline that catered to audiences who wanted to see them take on a more romantic rapport. Their only-on-Mondays relationship was propelled by cute situations that not only added a hilarious flair to Running Man, but also saw the emergence of a large group of fans who actually wanted the pair to be a couple in real life.

Now, I’m all for shipping characters in a show. Lord knows I shipped Joey and Pacey from Dawson’s Creek for most of my preteen life (okay, and maybe I still kinda do), but shipping real people is where I draw the line for myself. It’s just ripe with fanfictiony weirdness. But Korean variety shows and the headlines surrounding them blur the boundary between fiction and reality. How do you distinguish between a person’s character on a variety show, and that same person in real life? It can get confusing, especially when show creators and the variety members themselves feed into the hype. Take this photoshopped wedding photo Gary tweeted out to fans late last year: 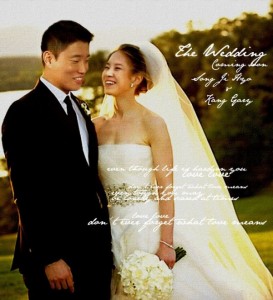 This is what you call fodder for the already starved imaginations of dedicated shippers all over the globe. Variety holds a unique position in entertainment because show members continue to act out their characters for fans even after the show has ended. For variety stars, the show is over after they’ve finished filming, but for some fans, the show and its characters continue even beyond that. Which is why some Monday Couple fans are not able to distinguish between Gary and Ji-hyo’s relationship on camera, and their relationship off camera. And even more alarming, some fans are not able to grasp the concept that these two were never a real couple to begin with.

Some reality shows take advantage of this concept. The most obvious example is the ever popular and inexplicably addicting We Got Married, 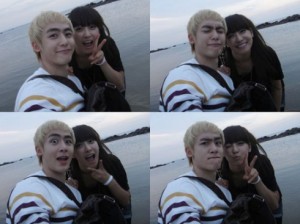 where famous folks, specifically idols, are paired up with a member of the opposite sex and are expected to interact with each other in a domestic fashion. This means calling your husband yobo, washing the dishes together, and taking romantic vacations with each other. And judging by the reaction of one recent Khuntoria fan, sometimes the relationships on these shows can feel a little too real.

But it’s not real. And no matter how vehemently you tell me that the fake couple from your favorite variety show actually is real because, damn it, they’re made for each other—chances are, they’re probably still not real.

But in the case of the Monday Couple, I’m sure everything is going to be fine. In addition to having amazing chemistry on the show, the cast also maintains a tight friendship off-screen. In fact, as the Running Man’s PD suggested recently, all the cast members were probably already aware of Song Ji-hyo’s relationship from the beginning. And as Gary indicated, there’s no reason to feel sorry for him. He’s fine, folks. All the messages laced with sympathy are giving him nothing but stressss.

What do you think about the real-life shipping phenomenon? Are there any non-dating couples you wish would date? Don’t worry, you can tell me—I’ll keep it a secret.