After almost two years, SPICA has finally made their first comeback after switching labels last year. The members have been largely out of the spotlight, with only a couple of contributions to OSTs and an appearance at KCon Abu Dhabi. Their last comeback was a slower paced song, but “Secret Time” is much more upbeat. With more elements of R&B, “Secret Time” is a decent track for people to refamiliarize themselves with SPICA. 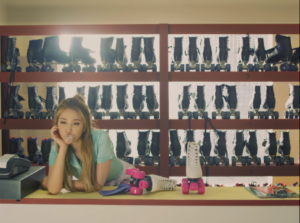 ret Time” follows the trend of Instagram filtered aesthetics that many k-pop groups have been employing recently. They’re working in a old school roller rink, complete with a diner. Everything has a slight pink hue to it with complementing pastels. It is visually striking and feels appropriate for a song coming out during the summer. What’s interesting from a cinematographic point of view is the two different aspect ratios in the music video. For all the shots inside the roller rink, the aspect ratio is closer to 4:3 and all the shots of them dancing outside are closer to the standard ratio seen in music videos. The 4:3 ratio forces the focus to be more towards the center, further reinforcing the whole vibe of the MV. It also reinforces the whole Instagram vibe. It’s really a gorgeously shot MV and seeing the members have a secret party complete with bubbles and sequins.

The song itself showcases SPICA’s vocals. While not as harmony heavy as groups like Mamamoo, Boa and Bohyung harmonize beautifully throughout the song. The song has a retro vibe to it, even with the synths in the background. It works really well for the group; the background is interesting enough to move the song along, while simple enough to let their voices shine. It is not a complicated or original song, but it’s good. It is catchy and fun and just different enough. Plus, they’re able to maintain their slightly quirky image. 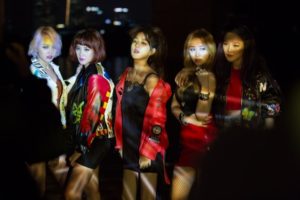 The lyrics to “Secret Time” don’t make sense, at least not in English. The basic point seems to be there’s a love interest they would like to spend some private time with. They aren’t anything special; the not-so-subtly hint at wanting to be intimate and expressing that there’s no need for them to wait. But after telling their lover they want to be with them, the backing vocals say, “We don’t need you boy.” It’s a contradiction, but since the lyrics in general don’t flow, you kind of just need to ignore them.

SPICA’s fans are surely excited to have them back. “Secret Time” may not be revolutionary, but it’s a decent song. The visuals are excellent and the MV is well produced. Maybe now that they’ve officially returned to K-pop, they’ll be able to pick up where they left off.