WTF Fashion: Big Bang is Back?

Big Bang is scheduled to comeback at the end of this month and recently the group was in New York City filming their upcoming music video. Because of fans, footage has been leaked of the boys recording their music video on NYC’s streets. From what I’ve seen, the music video does not look promising, but I’m going to reserve my judgements until it’s officially released. But there is one thing I’d like to bitch about: the fashion.

YG Entertainment isn’t known for being conventionally fashion-forward. I mean, look at 2NE1. Rather than opting to be trendy and stylish, their groups typically wear crazy, creative clothing from the likes of Balmain and Jeremy Scott. Loud, boistrous, and distinctive, their fashion style has a look to it that identifies them. Personally, I’m not a fan of the fashion choices YG artists make. From the crazy hair to the obnoxious clothing, I find it pretty tacky, but it’s what I’ve come to expect from YG, and they do not disappoint. 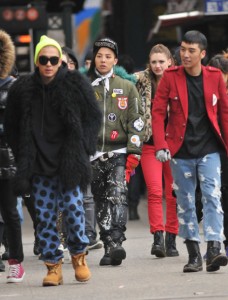 I ask you, would K-pop be K-pop without some eyebrow-raising fashion choices? The clothing Big Bang is wearing in these photos takes the cake as far as strange fashion goes. The style is like a combination of hipster, hobo, gangsta, and punk, using different patterns and textures to create a unique look. These looks almost make me miss “Lollipop” and “Knockout.” 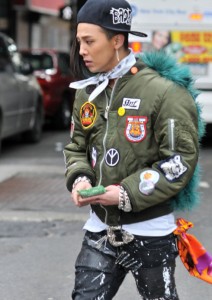 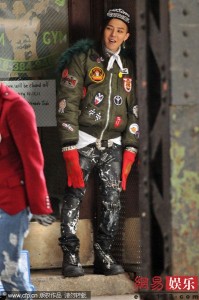 G-Dragon is known for being a fashion icon, having the confidence to pull off any look with polish and aplomb. He even looks good in this montrosity (perhaps I’m just too used to seeing weird K-pop get-ups). First thought: Ninja Turtle. Second thought: moss. Third thought: awkward extension hanging out of hat. The coat is vomit-worthy, the fur, patches, and color making it the biggest fashion fail I’ve seen in a long while. Really, why was that made? Who thought it was OK to manufacture that coat? And those hankerchiefs and leather skinny jeans make the outfit undefinable. The jacket looks military-styled, the leather jeans remind me of punk rockers, and the handkerchiefs are just an odd touch. Lastly, the hair. I actually do like GD’s new hairstyle. In other pictures and videos, he looks fabulous. The hairstyle is edgy and a little posh and G-Dragon embodies it very well. Here, falling out of his ball cap, it looks like an awkward extension (I’m pretty sure it is an extension, his hair wasn’t that long at the EMAs). 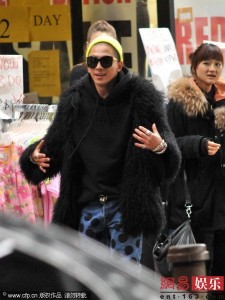 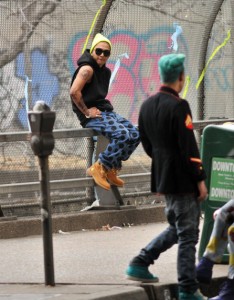 Then there’s Taeyang. Taeyang’s outfit reminds me of thuggish teenage boys that don’t bother changing out of their pajamas. The baggy, spotted pants, bright yellow hat, black hoodie, and Timberland boots form an ensemble that’s the exact opposite of what’s considered fashionable. To top it off, there’s his new hairstyle – it makes me want to cry. 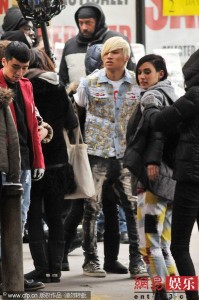 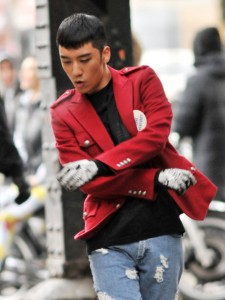 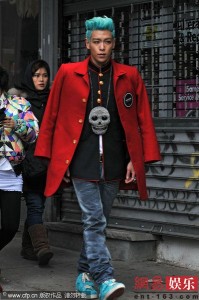 T.O.P, Daesung, and Seungri have more of a punkish look to them. Daesung, newly blond, wears faded and decorated denim. Seungri wears a red blazer and overly distressed jeans polka-dotted with tears. Compared to the others, he looks the most normal. With his new hairstyle, he also looks like Spock from Star Trek. T.O.P needs to get rid of that skull necklace around his neck and put on a different coat that looks less vampish. He’s filming a music video, not the next vampire movie. I find it cute how the stylists matched his toothpaste-colored hair to his sneakers but am against how strongly the sneakers clash with his look and how casual his denim jeans are in contrast to his shirt and jacket.

I wonder what other outfits the boys will be wearing in the music video. This is only one scene; there’s bound to be at least two others, and with them other outfits. Hopefully, they won’t be as horrendous as these.

What do you think about Big Bang’s comeback so far?