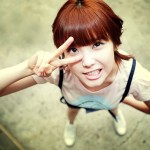 Have any of you guys noticed that a lot of IU‘s main track songs sound like they came straight from a musical? Although a lot of the content of K-pop songs may seem like they may fit into a drama or a story, IU’s songs in particular are unique to me in that their actual sound (and not just the theme) just screams to me, “PUT ME IN A MUSICAL!”

To show you guys why I think IU’s songs should be in a musical, I have made an OST tracklist for “IU the Musical.” The following is the order of the songs that are included:

This song would be great beginning song for the “musical.” Every start song in a musical should be an energizing attention-grabber that is able to draw the audience in, and “Good Day” fits those requirements to a T. The lyrics of “Good Day” would also work well to open up the storyline. The song talks about how today is a good day for the protagonist girl (IU) to confess to her guy crush, but she feels awkward and doesn’t know what to do. Besides the content of the song, another reason why “Good Day” would be perfect to open the musical is that it has that whole long note thing at the end that musicals just LOVE to do.

“Marshmallow” is one of those cavity sweet songs, but I think that it would be a great addition because musicals always have those happy moments, especially near the beginning of the plot. This song talks about how this guy is so sweet like a marshmallow, so this can be like the scene where IU is about to go on a date with the guy she’s been wanting to date for a long time.

Now lets go to the scene where the guy is a jerk and ends up breaking up with her without any care or reason, and we find out that he had really wanted to break up with her earlier…

Track 3: The Story I Didn’t Know

Most if not all musicals have at some point have conflict, and with the conflict there is a slow song that accompanies it. “The Story I Didn’t Know” would be a great slow song to accompany this scene because the lyrics and the mood would perfectly portray IU’s heartbreak. The lyrics entail her feelings about her boyfriend breaking up with her, and the “story” that she did not know is that her boyfriend wanted to break things off with her at an earlier point if not at the beginning.

Okay, so “Someday” isn’t a main track, but it’s too good to not be included. After the main conflict, the protagonist is usually in a crappy mood, and after “The Story that I Didn’t Know,” this song would be a great transition because it talks about moving on from the pain.

At the end of the musical we would have…

Final Track: You and I

It may not go along perfectly with the rest of the plot because the song is about her being to young (or mature) to be with someone right now, but in general, endings are happy and almost as peppy as the beginning, so why not “You and I?”

And there you go, my version of the IU musical. Do you guys agree with my choices, did I forget something, or was I just awesome? Let me know in the comment sections below.