A High Cut Above All Others: Jang Geun-suk

For January’s issue of High Cut magazine, Jang Geun-suk talks about his Japan tour “Always Close To You” and his busy life. And since I can’t read a drop of Korean, I took solace in the pictorial that was featured along with the interview. By this point, I can only shake my head in wonder when I see Jang Geun-suk’s “style”. Honestly, if he didn’t carry these looks with the confidence of king, they wouldn’t have worked out as well as it did. 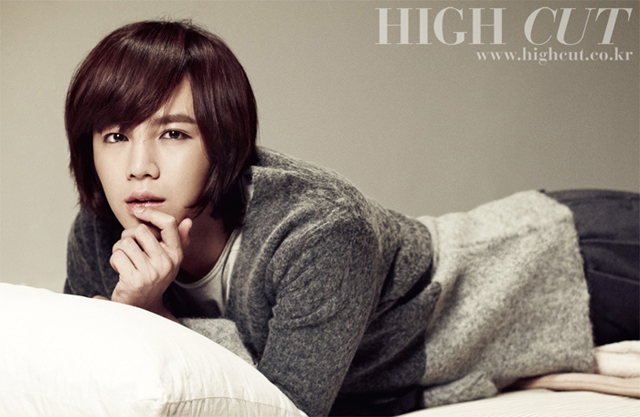 This shoot struck a strong cord of similarity since it looks like it’s taken from the movie “You’re My Pet” than a photo shoot in a magazine. Here Jang Geun-suk is wearing a two-toned cardigan and grey t-shirt from Rick Owens. It wasn’t a particularly interesting shot nor were the clothes all that intriguing. Instead, I found that his expression really captivated me more than the clothes he donned. Although I’m not a big fan of his shaggy hair-do, it does keep with the tone of the drama (Love Rain) he is currently filming. 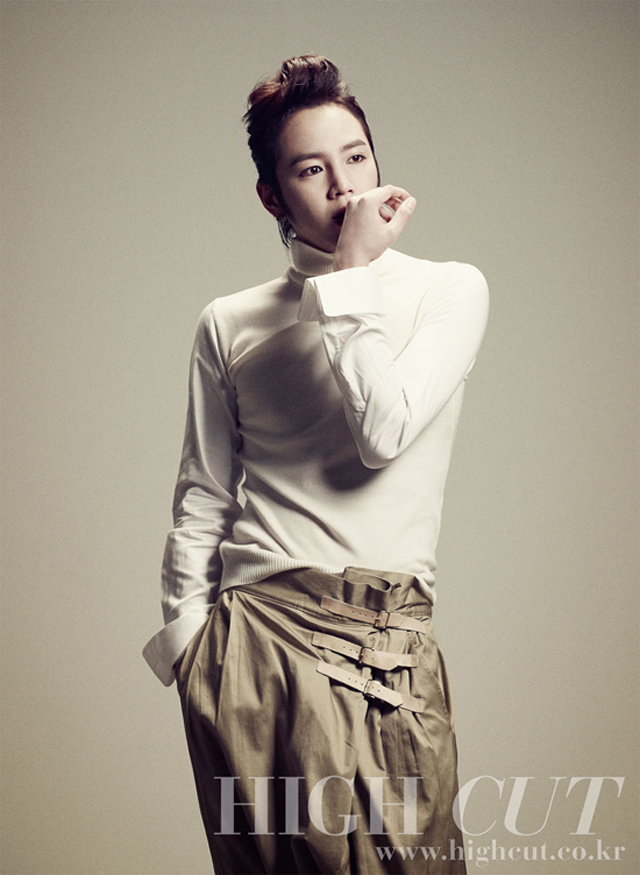 Man, I really miss this hair-do. It’s like he is teasing me with what he could be and then goes and ruins it by becoming an Asian goldilocks… but I digress. Here, the young actor is in an ivory turtleneck paired with camel colored buckle pants (if you can call them that) by Tom Greyhound. As strange as these pants are, I do like them. I like the structure of the folds and the shadows it creates in this shot. Although, I wouldn’t want to see them worn on the street, they do photograph beautifully. 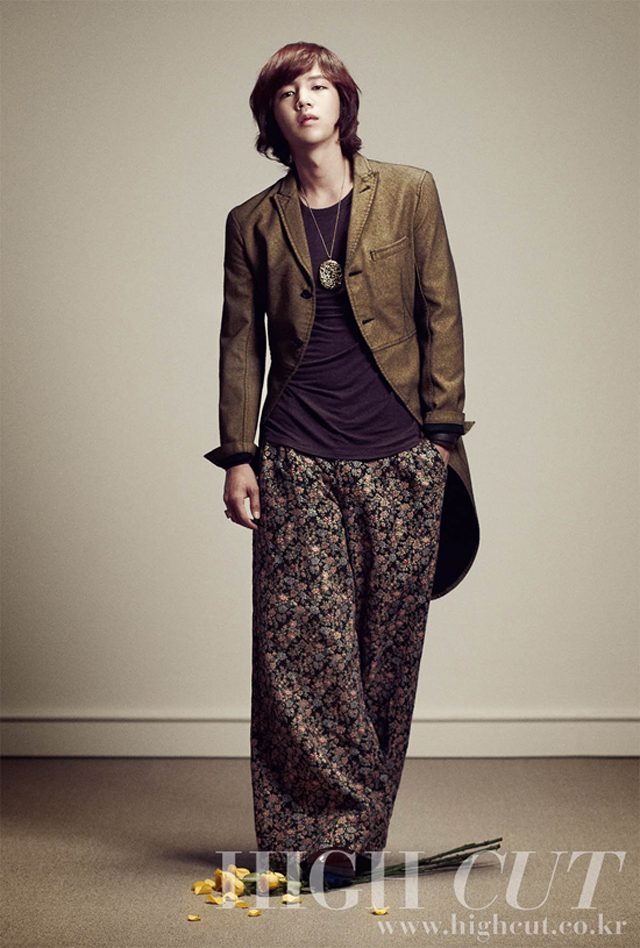 I think the main theme of this pictorial is ‘Pants That Only Jang Geun-suk can pull off’. Here he is wearing a gold long-tail jacket paired with a t-shirt and wide floral pants by Alexander Wang and Tom Greyhound. This look is completed with Oxfords from Prada and topped off with a gold necklace. I was left speechless when I saw this shot. The only aim I can see with this outfit is to confuse the viewer. Actually I quite like look of the gold long-tail jacket. I adored TOP’s purple Regency cocktail jacket from the 47th Baeksang Awards, and this gold jacket would totally rock on the red carpet.  Unfortunately, I can’t say the same for those pants. I didn’t like them on women, why would I like them on men? To me it screams Ajumma loose work pants. You know, the ones worn in fields and what not. Not even Jang Geun-suk’s ‘I’m sexy and I know it’ expression can convince me otherwise.

It’s a good thing that Jang Geun-suk has his unflappable confidence to pull off these looks because I don’t think anyone can without looking ridiculous. Sometimes the model sells the clothes better than the clothes sell themselves, but that doesn’t bold well for people who don’t have the same ability that Jang Geun-Suk has . What did you think of these looks? Do you think you can wear the same?

And also: Did anyone else find the featured picture as funny as I did? I don’t know if I should have laughed or cried at the ‘smoking rose’…