Recently, a sex scandal tying EXO’s Kris and actor Jang Geun-suk to Chinese actress Lin Xi Ya swept across the internet. But now, it looks like the story is casting a wider net, with JYJ’s Junsu being thrown into the mix.

When the story first broke, photos from Li Xi Ya’s smartphone appeared on the internet, revealing possibly intimate relations with a group of male celebrities. Netizens used their sleuthing skills and ultimately argued that some of the photos reveal Kris and Jang Geun-suk as two of her partners. A message thread between Li Xi Ya and someone sharing Kris’s name also seems to strengthen suspicions.

Since then, Junsu has been tied to the scandal as well. His name allegedly appears in Li Xi Ya’s text messages, which were attached to photos of someone cloaked in a hooded sweatshirt. Some have made connections between the bed and curtain and Li Xi Ya’s photos and those that belong to Junsu, although nothing has been conclusive. 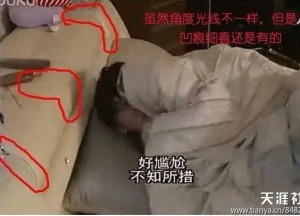 Netizens have been known to put their detective hats on when scandals drop, but sometimes the evidence summed up is lofty at best. Jang Geun-suk’s agency TreeJ Entertainment has acknowledged that his face is in the photos, but also claims that the photos have been doctored.

Since the story is running on speculation and hearsay thus far, I suspect that the rumors will run out of steam if no other parties get involved. Agencies are very strategic in deciding when and how they respond to scandals, and their choices in the next few days will determine how much buzz this story gets.

What do you think, readers? Have you been following the news or are you skeptical about the developments thus far?