Earlier this year NH Media announced U-Kiss‘s foray into foreign markets. Their name “Ubiquitous Korean International Idol Super Stars” was originally intended to represent the member’s international backgrounds. Former member Alexander was known for his ability to speak seven languages, and other members are fluent in Chinese, Japanese, Korean, and English. And like other K-Pop idols, U-Kiss has ventured into the Japanese market under the mega-entertainment company Avex Group. They released their first original Japanese single Tick Tack on December 6th.

Since their debut U-Kiss has been dubbed as the “underrated” idols  who have yet to win an award, much to many Kiss-Me’s dismay. Now I did not go crazy for my “oppas” in Shut Up nor did Bingeul Bingeul make me tingle tingle, I only became a fan after watching 0330 and Neverland. So I was a tad worried when NH Media announced their overseas venture. While this group has an edge with their members who are mulit-lingual, their hits weren’t big enough to garner a lot of popularity. I attribute this to Brave Brothers producing their songs but I digress.

They’ve just released “Tick Tack” and I will say that this song has been my jam for the last couple of weeks. It has heavy electro-dance beats and does not overdose on the auto-tune *coughmanmanhanicoughcough*. It isn’t the best song I have ever heard in my life but it’s a good song with a good melody and hook. The rapping wasn’t bad but unfortunately AJ has not graced us with another math equation, so I will try my best to endure the pain. 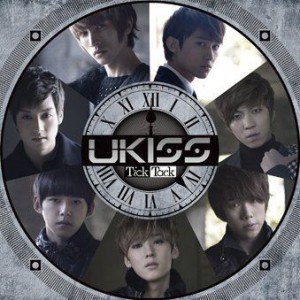 The music video is gorgeous. Though I was starting to get sick of dance videos (SM, I’m talking to you) this one had a very dark feel and the sets were great. The large clock and other time measuring device scattered throughout the music video did a good job with tying in the theme of the song with the music video. Although this video screams U-Kiss — and the similarities to “Neverland” are obvious — it is still different in its own way.  The video uses a lot of texture, adding depth to the video, and it uses dark, cool colors.  Near the end, silver confetti starts raining down (like  the snow in Neverland but shinier) and I thought it looked awesome. Of course, as someone with a short attention span, I am easily fascinated by shiny objects.

This wouldn’t be K-pop without some questionable stylist choices. The suit, in my opinion was interesting, they snazzed it up with shiny trimming and combat boots. But I feel like U-Kiss stylists have some sort of vendetta against the members: first the man-bra contraption in Shut Up then the “Black Swan” outfits in the Neverland promotions. Now it’s Kiseop‘s hair, oddly resembling that on a rooster.

But questionable fashion choices aside, the boys did look great and performed well. The dance to this is pretty catchy, an essential to a K-Pop song. It was like a masculine version of the dance from SNSD‘s Genie. I also like when they split the group into to two and danced to two different sets of choreography. And at the end, the members all do dance moves which resemble the ticking hand of a clock, which I loved. My favorite part probably has to be the exorcism Soohyun performed around 2:35. May the power of Soohyun compel thee!

So nice music video, nice outfits, nice song, and nice dance. Will it be enough to finally push the boys to the top? I personally don’t think so, because as great as the song was, it wasn’t absolutely amazing. Especially with the influx of Korean artists in Japan, I don’t know if its going to stand out or blend in with the rest of the groups.

What are your thoughts on it? Will they finally win an award or will they forever be the “underrated” idols?