Sometimes, I feel like there are K-pop groups that go neglected. They don’t get enough love, press, or recognition as they deserve. Such is the case with boy bands DGNA and INFINITE. Like SM, both groups released Christmas-y songs that were filled with cuteness and holiday cheer. Because I feel that DGNA and INFINITE are so neglected, I decided to spend some of my time giving these boys some love.

There are no costume changes in “Love Days.” The boys wear the same looks throughout, losing jackets and scarves as the video goes on. Karam is the first to appear, wearing a striped sweater, green vest, and red-and-green scarf. Karam’s outfit isn’t my favorite (the mixed prints aren’t to my taste), but he’s still adorable. Then appears curly-haired In-jun, wearing a leather-and-plaid jacket over a cozy fair isle sweater. I hate his jacket but without it he looks precious. Jay pops in, a striped sweater tied over his shoulders for whatever reason. I was certain society left behind this silly trend in the last century. More than that, that sweater is hideous and weird with his varsity jacket. But at least Mika looks yummy. Like the others, Mika’s outfit makes use of mixed prints. He wears a woodsy sweater, plaid shirt, and striped scarf. I like his sweater but believe his outfit would work better without the scarf. Hyun-min is the last to appear, wearing a poof-ball hat, yellow jeans, and a leather bomber jacket. The boys finish their grocery shopping and dance home to begin decorating.

The music video, fashion and all, is adorable but I’m glad to see it doesn’t over use aegyo. I’ve had my fill of pastel colors on young men too old to be wearing baby pink skinny jeans. Although I find many of the mixed prints to be mixed wrongly. If you’re going to mix prints, be sure to mix them wisely. Use a noticeable color scheme to tie the prints together and it’s a good idea to mix prints that have the same feel, like cutesy polka-dots with precious flowers. Still, the fashion in this music video is tasteful enough to be noticed but subtle enough to not be overbearingly obvious. It fits with the theme and with the season. For this, I give my love to Daikoku Danji.

Like DGNA, INFINITE released a Christmas-themed music video filmed in Japan called “White Confession” or “Lately.” Also like DGNA, the boys simply walk around, look cute, and sing thoughout the whole music video. Their outfits don’t deviate very much, but I’m too enraptured by their prettiness to care very much. Sung-jong is the first to appear, wearing a brown scarf, navy peacoat, and faded jeans. I like his coat but for no really good reason, I’d rethink the jeans. This is totally just me talking –  I don’t 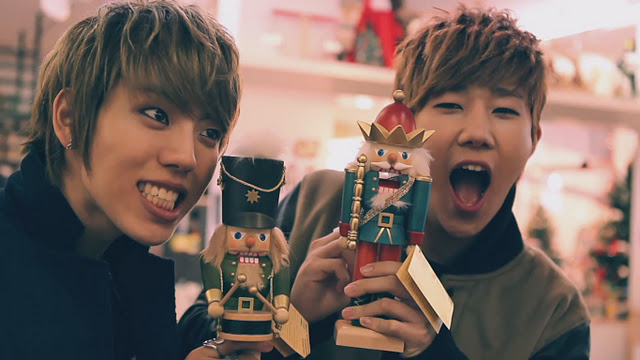 really care for faded, frayed jeans. Myung-soo next appears in a striped shirt and dark coat with noticeably large buttons. As much as I love Myung-soo and his smolder, his outfit does nothing for me. Sung-gyu is the third to appear, wearing a very simplistic outfit. Then comes Woo-hyun, who wears the weirdest looking sweater and scarf in the music video. It has these plaid arms and drab greyness that I just don’t agree with on him. But Sung-yeol is soooo cute in his green jacket and tribal-looking scarf. I love how his hair is in this video – it makes him look less like an adorable baby-faced kid and more like a mature young adult. Then Hogod, also known as Hoya, suddenly appears, looking absolutely sexy in grey. Dong-woo is looking majorly fine, too. I don’t usually like blond hair on K-pop idols, but Dong-woo actually looks more becoming blond. He looks like a pretty-boy, in the best sense of the word. The boys finish up their Christmas shopping (for me, I hope) and go have dinner.

Alright, so the music videos aren’t the most entertaining and maybe neither are the songs. The main point of both videos is to simply emphasize the good looks of each band’s members, in the typical K-pop style of close-ups, dreamy atmospheres, and aegyo. The songs are sweet but not striking, in my opinion. However, the wholesomeness and sweetness of both songs and music videos is all you can expect from a Christmas-theme. Like Ree said in her article, Christmas songs and albums are always cheesy.

The main point of this article was to talk about other groups for a change.