This K-pop in America thing is having a minor explosion, isn’t it? SNSD may not necessarily have blown up the Itunes charts like Sones everywhere were hoping, but their English music video plus SM Town at Madison Square Garden got tongues wagging, even in the mainstream America media. From MTV to the New York Times, articles have been popping up discussing K-pop’s American ambitions.  And after all, wasn’t that the whole point of it? Perhaps chart-toppers and radio domination would have been far too much to ask for, but the companies were smart enough to know that if they played their cards right, they might get a little bit a media attention. And attention, surely they got.

Perhaps out of the scattering of media outlets chronicling K-pop’s toe-dipping into the waters of international promotion, the most surprising was Pitchfork. Yes, that Pitchfork. The Pitchfork read like the bible by hipsters nationwide, and reviled by even more hip hipsters nationwide. To be honest, I was kind of dreading actually clicking on it when I read the headlines. Pitchfork is well known for being snobbish, as a website that claims to be an arbiter of taste in the underground scene well should be, not to mention unecessarily elitist.  And let’s face it, K-pop provides ample material to snark at, even to the most ardent of fans. But suprisingly, the article was not only gentle, but on point.

It certainly sounds young–even if you ignore the fact that most K-pop groups are made up of teenagers, there’s a wild, enthusiastic spirit evident in the way their producers gobble up and spit out sounds like Britney/Gaga Eurotrance, Auto-tune, rapid-fire rap, swooning Final Fantasy strings, breakbeats, and industrial-strenth synths.

That’s the best sum-up of the odd analgram that is K-pop that I’ve read in a long while. It’s absurd, it’s derivative, it’s a mashup, and it’s glorious. And it’s also fascinating that an American media outlet, especially Pitchfork, can see that, and not the Bieber voices and the baby faces mooning at the camera. 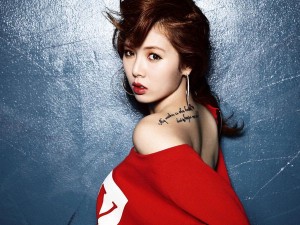 Perhaps the most telling thing about the Pitchfork article, though, was the selection of groups and singers that writer James Brook offered up to make his point: GD&TOP, 2NE1, HyunA, and After School. What do all four have in common? A little more sex appeal than is common in K-pop. Of course, ninety-nine percent of K-pop groups have some measure of sex appeal. After all, that’s their main selling point. However, they tend to have sex appeal in a distinctly Korean/East Asian way: milky pale skin, enormous eyes, stick thin arms and legs. T.O.P, however, is the kind of sexy that can be appreciated in the West as well as the East. Just listen to that voice! 2NE1 as well, has the banging bodies and distinct fashion sense that doesn’t always fly in notoriously conservative South Korea, but would probably be appreciated a bit more out in the West. As for HyunA? Well, look no further than the “Bubble Pop” video. Sure, the song is quintessential K-pop, squeaky, cheery, and running on a hook chorus. But HyunA herself is tanned, long-legged, and not afraid to shake either her boobs or her butt. After School is along the same lines.

SM, JYP, YG, I hope that you’ve taken notes. This is what Pitchfork likes, so this is what a sizeable chunk of internet denizens and listeners in US is going to like. A quick summary of the implicit advice and conclusions that you can draw from the recent media attention, particularly over at Pitchfork: firstly, amp up the sex appeal. But amp it up in the right way. I didn’t see any mention of Orange Caramel, and that was probably for a good reason. Secondly, embrace a little controversy, a little danger. GD&TOP, along with the rest of Big Bang, always seems to be specially noted for their relative daring in the cloistered little world of the K-pop industry. Lastly, embrace the cheese, but try to embrace it in an epic way. The thing that Pitchfork claimed sets K-pop aside is its pretension and grandiosity, and that’s not necessarily something that should be lost. Plenty are saying that groups on the move should assimilate into the American industry, but if the media articles are anything to go off of, then it might be wiser to keep that little something that sets K-pop apart from American pop.

Do you think that being featured in respectable media outlets will lend K-pop some credibility in the States? What conclusion can you draw from the Pitchfork article?