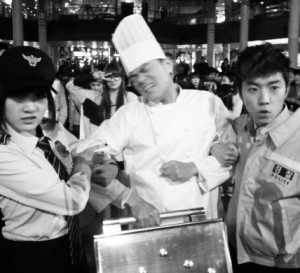 Music mogul JYP is at his antics again. Is there anything the man hasn’t tried and done?

Not only has he been able to maintain an impressively long career as a singer, but he also happens to be the figurehead of one of the ‘Big Three’ entertainment companies in Korea. In just these recent few years, we have witnessed JYP run out of toilet paper in a bathroom stall, leap through a flaming hoop on the mean streets of Itaewon, create his very own nation, and produce a home-grown drama (Dream High), in which he surprisingly proved himself to be a decent actor. Love him or hate him, there’s no question that the man is a hardworking entrepreneur with quite an enthusiasm for dabbling in interesting new endeavors.

Which is why, in retrospect, it is not all that surprising to hear that JYP now plans to launch his own Korean restaurant in the heart of New York City.

Watch the teaser below:

The restaurant, called Kristalbelli, was recently highlighted in the New York Times as: 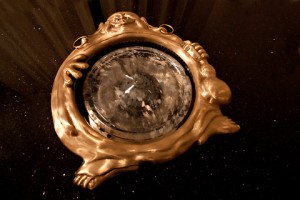 The name Kristalbelli is derived from the grills themselves, which each consist of a single piece of crystal resting on the belly of a smiling Buddha. While typical barbecue grills use convection (a process that heats the air around the food being cooked), these grills use infrared technology to focus the heat directly onto the crystal surface, leading to higher temperatures, as well as a more fuel-efficient and even distribution of heat. This type of cooking process has long been heralded in Korea for its health benefits, but is something relatively new to the American scene.

Another unique feature to the restaurant is that it will have powerful downdraft machines to suck the usual smoke and cooking smells out through the floor, rather than the ceiling. This means that customers will be able to leave the restaurant without their clothes and hair smelling like smoke for days afterwards (as is typical of the normal Korean barbecue experience).

The restaurant will be run by David Shim, a Korean-American graduate from the C.I.A. (Culinary Institute of America), who has an impressive career history as chef at the L’Atelier de Joel Robuchon, Gramercy Tavern, and Veritas. Although the full menu has not yet been released, the restaurant promises items such as pork belly, Wagyu beef, premier wines, and organic vegetables. 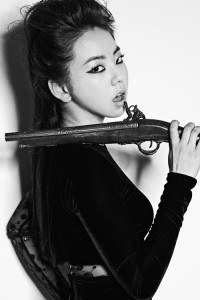 The restaurant is still under construction, but is projected to open to the public during early December of 2011. From the looks of it, it will be a two-story restaurant, with a private lounge and two large party rooms available for private and corporate gatherings. JYP purportedly plans to make his restaurant ‘the spot’ for the leaders of the entertainment industry. He has invited investors such as Horace Madison, the business manager for Lil’ Wayne.

In addition, starting next year, JYP plans on extending branches of his restaurant to five other major entertainment cities of the world: LA, Beijing, Tokyo, Shanghai, and Seoul.

JYP, you got me. As a major food enthusiast, this current endeavor of yours definitely earns points in my book. Perhaps (if you make the restaurant accessible enough to the general public so that I can afford to eat there at least once) you will be able to make up for that plastic pants incident that scarred my mind for years.

But it probably won’t be enough to appease me in the event that you happen to make a big mess out of the upcoming Wonder Girls comeback, because I will have to assume that you were using most of your time in New York City to design and build your new restaurant (as wonderful — no pun intended — as it may be, the girls should be your first priority), instead of properly devoting enough attention to the girls that, in the first place, turned your empire into what it is today.

That being said… the teaser pictures for their new concept already look promising, so here’s to optimistically hoping that you don’t disappoint on either front!

What are your thoughts? Do you think JYP’s latest endeavor will succeed?