JYJ Fans Take Down the City of Seoul

JYJ fans were upset that the City of Seoul launched an ad campaign that resembled their own campaign they made for JYJ earlier this year. 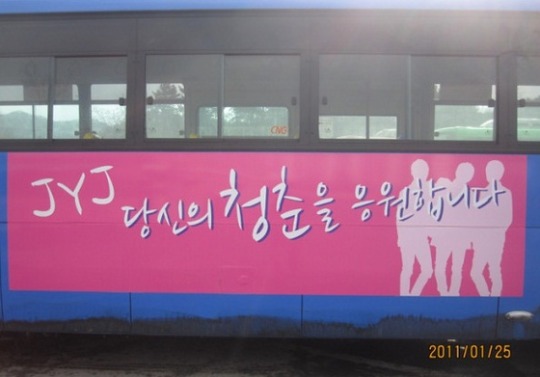 Before we get into the technicalities of today’s incident, who’s idea was it to pay good money to slap on this poorly designed advertisement on a bus to cheer for the trio?  Aren’t there about a hundred and one better ways to show support other than paying good money to display JYJ and “We support your youth” on public buses?  Actually, let me take that back.  I’m pretty sure that JYJ fans are doing everything imaginable to express and show their support.  The ad on the bus was probably the cream on top.

Back to today’s incident.  The City of Seoul released a display banner ad today that had a similar font and tagline as the fan-made ads.  And as expected, the JYJ fans got upset, for how dare the City of Seoul use a commonly used font as well as an everyday expression to market Seoul!   Unbelievable.  Astonishing.  Unacceptable.

It didn’t take very long for distraught JYJ fans to take their emotions to twitter, the City of Seoul to release an apology, and to pull the ad campaign.  (Also, what are JYJ fans called these days?  Cassies?  Orions?  Enlighten me please!)

Incidents like this makes me realize how powerful and fearless fandom is (and how bad the advertising agency for the City of Seoul must be).  JYJ fans made the City of Seoul, a government entity, release an apology statement within hours.   I’m sure the City of Seoul did not want a parade of angry JYJ fans at city hall demanding an apology but in all seriousness, what are these fans doing on a daily basis that they can catch on things like this?  And who are they to think that they own the rights to a font and an expression that are widely used?

A part of me wishes that the City of Seoul ignored these emotionally charged tweets and went on with their campaign because this is another win that JYJ fans did not need to stroke their fandom egos.  But I guess kudos to them for being big brothers of all things related to JYJ.

I wonder how JYJ members really feel when they encounter reports like this.  I hope it’s a mixture of embarrassment and fear.  Imagine what would happen if one of these boys came out with a girlfriend!