...And How Variety Shows Are Ruining Idols 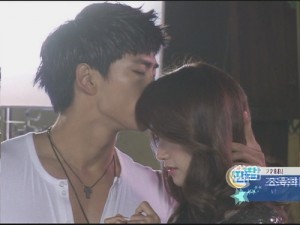 I remember reading my colleague’s article and generally agreeing with her contention about the detriments of idol casting for variety shows. Most idols lack a seasoned comedian/-ienne’s comedic timing and ability to balance exaggerated humor, and they rarely reveal much of their true personality or adapt well to an ensemble casting.  It seems to be a matter of who can stand out the most rather than working comprehensively with other members of a variety show. That fascinates me in the sense that while an idol is meant to be multi-talented, they are realistically limited in scope. But, why? Is it possible to say that just as idols are ruining variety shows, perhaps variety shows are equally projecting ill-conceived images of idols?

My argument derives from three details. The first is that many—if not all—variety shows are scripted. Some may be more than others, but every show consists of situations that are intentionally written and constructed for maximum comic or dramatic results.  With We Got Married and Family Outing S2, I feel that because producers are acutely aware of the role and definition of idols, they deliberately create situations revolving around romance and “heart-pounding” moments that are meant to reinforce an idol’s “idol” image (i.e. cool or cute). In the case of YoonA and Taecyeon‘s loveline on Family Outing S2 and Victoria and Nichkhun’s fake marriage on We Got Married, while I hated both pseudo-couples’ saccharine display of affection,  I can’t entirely blame them – it’s likely that the show’s script calls for it.

Limitation of the script inevitably affects the idol’s personality. I’m sure that every idol would much prefer to exhibit their true persona on a variety show, to loosen up and to be themselves. However, while that is easy for us to say and criticize, it isn’t that easy for idols to set into action. An innumerable amount of idols recruited to variety shows are from the Big Three, which means that what an idol does or say is unavoidably micro-managed and ascribed. That is, the company and the studio’s head executives have a large say in how idols are supposed to act in front of the camera. This is especially the case for newbie idols that do not have enough authority or professional experience to go against the wishes of their bosses; thus, by sticking with a limited personality, an idol is staying in the safe zone with their labels.

These two points culminate to the last and most controversial aspect of variety shows – netizens. Seriously, netizens seem to be both the heart and the bane of the idol system. Every idol must tread carefully with netizens, who are lightning-quick and hawk-eyed with their assessment of idols on variety shows. If a female idol is too rambunctious, that could be entirely misconstrued as her being too forward or arrogant. If a male idol is too talkative, he could be perceived as an attention-getter. In a specific example with 2AM’s Jokwon, while his zany personality was a bright spot on Family Outing S2, it also brought on widespread and continual speculation about his sexuality.

A variety show, then, becomes yet another hindrance for an idol.

I shall end with an interesting point: Koyote‘s Kim Jong Min.

When Koyote first debuted, Kim Jong Min was considered by many as a heartthrob for his good looks and cool image; some could even say that he was an idol of sorts. Fast forward to 2011, and what is he known for? For his goofy, comedic act on multiple variety shows more so than as an idol or a musician. There is a loss of the idol status as Kim Jong Min treks further towards physical humor and regular casting on variety shows, such that it surprises me to see him occasionally onstage performing with Koyote. My point? In K-Pop, it’s either stick to being an idol with all of its limitations or not at all – and become an idol no more.