Does K-pop make you question your sexuality?

I actually read the above as a statement in a forum recently, a post dedicated to the moderator’s adoration of a same-gender idol.

At first, I chuckled.

And then I pondered.

The sexualization of both genders in K-pop has always been a critical point of discussion for those who are either offended or intrigued by its prevalence in Asian entertainment industries. But what about its effect on a viewer’s sexuality? Is it intentional or unintentional?  Does it make a person more aware or make exceptions to their sexual preference?  Is it little wonder, though, considering the overt display of beauty, talent, and brains depicted and immersed in the influential social system that we call K-pop? 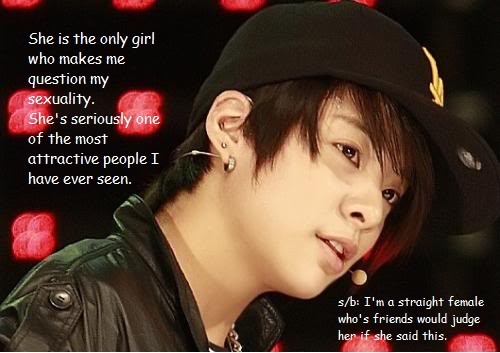 We can never be completely immune to the messages projected by the media, especially when it feeds on and reflects the general public’s supposed idealizations and fantasies of perfection. The Lolita, the beastly, the flamboyant, the effeminate girl, the aloof boy, the boy/girl next door, etc. – all of these stereotypes are found in varying degrees among idols and their paraded personalities. Deliberate on the question commonly asked of idols: “What is your ideal type?” What I have always found interesting about this inquiry is that the responses are usually descriptive of the idol[‘is image]; indeed, the “ideal” types are the idols themselves. Idols become exemplars of who we seek for or potentially attracted to, which is furthered by the physical.

This is when sexualization comes into play. For me, the degree to which an idol is sexualized is subjective and based on one’s personal and cultural beliefs, with various other factors thrown into the mix. I believe that there is always a limitation to sexual expression because it exists on a linear plane with sexualization. That is why an individual may perceive the cute/sexy concept of girl groups as small gestures of sexuality while others may feel that the girls are far too sexualized. The amount of ab-flashing by male groups could simply be a display of masculinity or another form of sexual objectification. In either scenario, the common factor is a focal awareness of an idol’s sex, that he or she is someone to be emulated and/or desired.

That varying level of desire is when we come to question our sexuality, and quite an arbitrary point for everyone. K-pop may have simply opened your awareness to another gender, may have confirmed or made into realization your own sexual preference, or may have changed your tolerance or acceptance to different sexual preferences. Or maybe, it merely made you wish you looked half as good as some idols.

At the end of the day, there is something to be desired, I think, that K-pop knows how to bring attention to.