Acts I wish would sue their agencies, part 5: Girl's Day 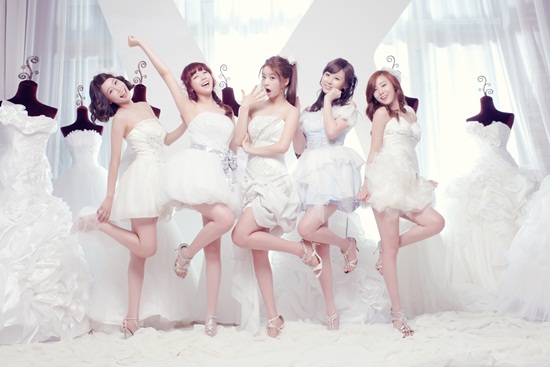 Last, but not least, Girl’s Day is another K-pop act that I wish would sue their agency. “This is because mostly, I don’t think even their agency understands how much talent there is in this group. Wouldn’t expect less from an agency named ‘Dream Tea Entertainment‘.

I get a bit sad whenever I see YouTube comments cursing them to hell, calling them wannabes, saying none of them can sing, asking Minah to jump off a cliff. Of course that feeling doesn’t compare to the sadness I feel whenever I observe that their videos are most popular amongst males aged 40-50, but that’s a different story. Unlike the other acts mentioned, where at one point they were at a steady track, Girl’s Day pretty much started out an abomination. Whoever thinks ‘Twinkle Twinkle‘ is bad, I advise viewer discretion when viewing the mess that was their debut song ‘Tilt My Head‘:

No honestly. It was so bad, it BLEW. MY. MIND. I couldn’t even make fun of them because I was so stunned by the atrociousness of it.

Funnily enough, though their debut single was the worst to date, the line-up they had during this time was pretty solid. With 3/4 of the vocalists being good singers, and having one rapper that wasn’t too terrible. The line up changes involved replacing members Ji In and Ji Sun with Hyeri and Yura, and although the line up did weaken considerably, the second single they released was surprisingly pretty decent. ‘Nothing Lasts Forever‘, although not perfect, definitely had more ups than downs (hellloooo there, pre-chorus), and it actually proved that these girls were rather entertaining to watch live:

The song wasn’t perfect by any means, but compared to their preceding single, it was like the musical re-inventment of the century. That was until they re-invented themselves back into what is their debut times 5000 more aegyo (not as bad as their debut though, wouldn’t go that far). There’s no need to embed ‘Twinkle Twinkle‘ is there? We’ve all heard it, and we’ve all shaken are heads at it. What sucks most is that they decided to be consistent with this cavity inducing, demeaning aegyo concept. And hence, from a superficial point of view, Gir’ls Day has no potential, no talent, nothing going for it.

The thing with groups like Girl’s Day is that the hidden gem is usually well- hidden by the ‘face’ of the group. Which in most cases tend to be the relatively-inferiorly-talented-but-pretty member. Who is usually also the single member known by the public. So you never know that there’s a great voice there, because no one knows said voice’s name. The funny thing about Girl’s Day is, their hidden ‘gem’- Minah– is pretty much all up in our faces. People know her for everything but her singing, which is a shame, because to be honest Minah is pretty fantastically talented. The maknae of the group as well as the lead vocalist, and no one can say she doesn’t deserve that spot. All things considered; her age, her voice, her everything- Minah is brilliant.

Another reason why Girls Day really needs to jump ship is for the sake of their leader Sojin. Whose vocals are no sneeze either. Sojin breaks my heart for several reasons. See, most people are under the impression that Girl’s Day consists of a bunch of 15 year olds dancing around in frilly panties. When their leader Sojin, the eldest, is actually born in 1986 and turned 25 this year. And here she is parading around like a five year old, how depressing must that be? The second reason is the fact Sojin has a very pleasant, husky voice, and is quite talented herself. But because of dramatic weight loss in a relatively short period of time, she had to be hospitalised for breathing problems, which is why she strains herself in the video above. Good work wasting raw talent Dream Tea.

Of course actually suing and leaving their agencies aren’t as simple as it sounds. They need to start from scratch, find another producer, hope to not be black listed yadda yadda yadda. Of course it’s irrational, but there are just some acts which break your heart with every single promotion- and you can’t help but think such sinister thoughts.

Are there any groups/soloists out there whose promotions you’re not satisfied with? Any acts which make you cry yourself to sleep as you murmur prayers asking them to leave their hell-hole of a talent agency? Share your thoughts!