JYJ 'Get Out' Music Video Released

Now this. This is a good music video.

Honestly, the formula to a successful music video isn’t that hard.  You don’t need an elaborate story line, or a mini KDrama angst fest. You also don’t need to have flashy lighting, slow-motion camera effects, dilapidated ancient Greek foregrounds, questionable CGI effects, or have your subjects painted as surreal demi-gods of some sort. Okay, we all know what I’m getting at. But after this good job of an MV, I can assure you all the “Ayy Girl” music video cracks will decrease significantly. 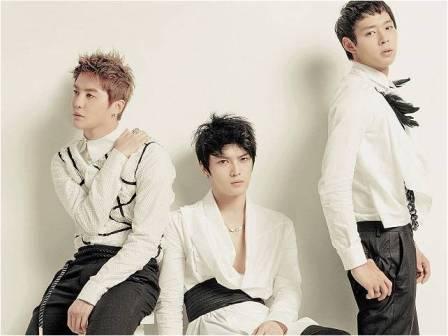 As previously mentioned, this music video is impeccably shot. The camera work here is stellar- zooming, tilting, and shaking, all in time with the music itself. Seriously, in the scenes with Jaejoong clutching the fencing, he looks absolutely feral, in the best way possible.

They say that a good music video can amend any song, no matter how atrocious it is. This is an example of that. Not saying that “Get Out” is an atrocious song, it’s a perfectly decent song if anything, especially considering the uninspired dribble Kpop seems so keen on releasing nowadays. But you can not deny that the MV definitely allows the song to leave a lasting impression in your mind. Especially with that choreography in tow. The aesthetic side of Kpop is almost as important as the musical side of it. Let’s face it, we see music just as much as we hear it. I mean, who can listen to “Sorry Sorry” without having that signature hook move come to mind? Who can listen to “Ayy Girl” without visualizing that lulz worthy music video every step of the way? (Actually, who can listen to Ayy Girl in general? – I promise, last Ayy Girl joke for now). Basically, a good music video can make a mediocre song decent, and in the case of “Get Out,” it can make a good song, phenomenal.

And to make amends with Yoochun for previously calling him more or less a middle-aged man, I have to say that the hair cut is a job well done. See what a good haircut does Yoochun? Meet me at that shifty alleyway Jaejoong was angsting in.