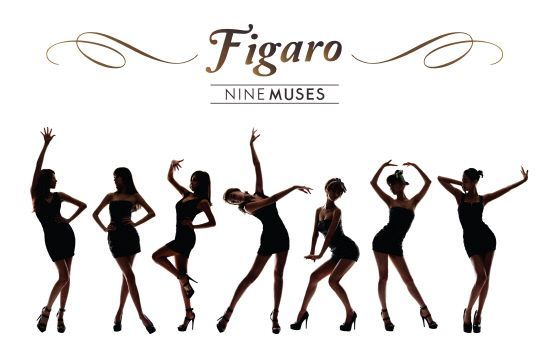 To be a Kpop fan, there are just some things you have to accept – the cheesy dance moves, artistic in-authenticity and the general WTF-ness that originates from various k-pop stars.  I can accept that all of this. However, since their debut, Nine Muses has hit nothing but a sour note with me. They epitomize every criticism thrown at Kpop. ‘No Playboy’ was possibly the weakest, thrown-together travesty I’d ever seen. It was obvious that the main focus was on their looks – which still is- but they were shameless about it at their debut.  With generic club beat with no melody, it’s not surprising Rainbow surpassed them with their ‘A’ for abdomen.  Rainbow was treading on their looks as much as Nine Muses were but Rainbow was just better at it. It also reinforces how important packaging and concepts are within the spectrum of Kpop, as distasteful as some find it.

With the latest, “Figaro” MV:

Did you notice that there were two girls were missing from the group?  I didn’t either…

While it won’t be a hit summer song, ‘Figaro’ has a nice, danceable upbeat melody. The new MV alone infuses the group with some much-needed personality, instead of that mannequin super-model soup that they were before. I still don’t know who’s who, but at least I feel like this group wants me to learn their faces.  As I said, they’re no Big Mama Soul, but if you’re going to steal out of the So Nyeo Shi Dae playbook, at least put some effort into it. The moral of the story: even Kpop has standards.