Correction: Not blonde, yellow. The poor man is wearing half of a vanilla bundt cake on his head.

Big Bang‘s G-Dragon and T.O.P were recently spotted at a party hosted by Korean beer company Dry Finish d’s. G-Dragon donned a beanie and a jacket that looks as if it’s composed entirely out of glitter glue, which is just typical G-Dragon. But as for T.O.P: 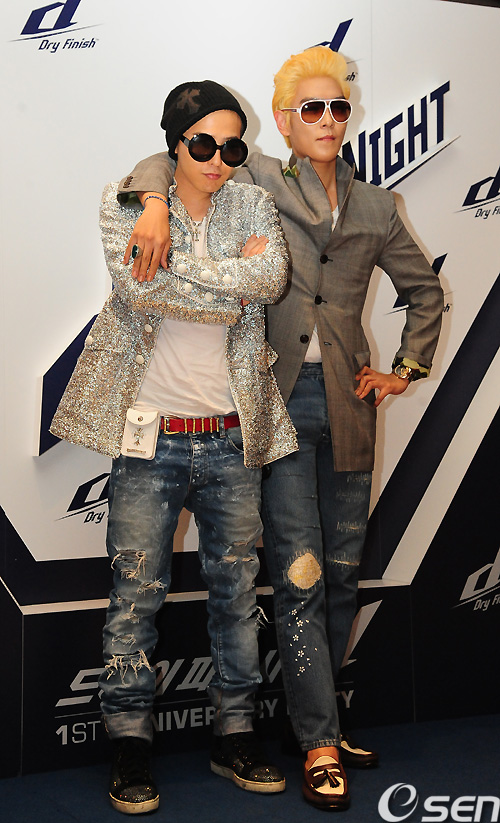 I don’t think I’ll ever understand why Korean stylists think that this shade of blonde is attractive on anyone. SNSD‘s Jessica and f(x)‘s Luna both had hair in a similar shade and it looked horrendous on both of them, but since it was for their appearances in Legally Blonde, I let it go. When BoA, G.NA, and 4minute‘s Hyuna had blonde hair, I tried not to mind too much. Heck, even when the entirety of GP Basic went blonde, I let it slide.

But this? This is too much for even me to handle. It’s as if they’re out to purposely ruin one of the hottest men in Korea in whatever ways humanly possible. After seeing how fiercely T.O.P worked that  gray hair a few months ago, it seems as if the stylists are grasping at straws to make this man as fugly as possible.

Granted, I’m probably overreacting – the dye job will probably get a little milder in the next few days…and I’ve always thought that T.O.P looked a little too Romulanish for my taste, so it’s not as if his new yellow hair really brought down my perception of his good looks by too much. Nevertheless, I still propose that in the name of good taste, we seek out and destroy every last bottle of yellow-blonde hair dye available to K-pop stylists. It’ll do the world good, I promise.

On another note, make sure you take a look at T.O.P’s jeans. They’re absolutely hilarious.