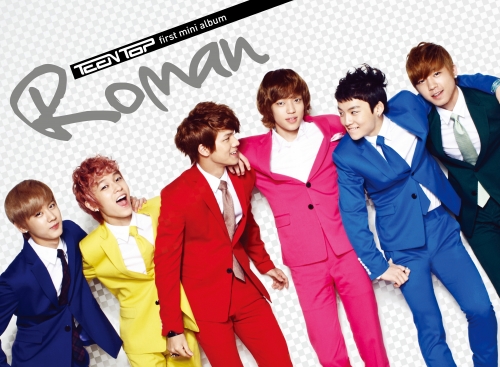 Or do they?  Boy band Teen Top makes a comeback with their first mini album Roman, and the MV for their title track “No More Perfume On You” (aka “Don’t Wear Perfume”).  It’s been six months since the release of their last single “Supa Luv” and just over a year since their debut as the band led by former boy band member Andy of Shinhwa.

The mini album has a total of six tracks featuring 5 songs and an instrumental of the title track:  1.  No More Perfume On You, 2. Beautiful Girl, 3. First Kiss, 4. The Back Of My Hand Brushes Against, 5. Tell Me Why, 6. No More Perfume On You (instrumental). The electronic pop dance track “No More Perfume On You”  was a good choice as the title track as I think it’s the strongest song on the album although the mid-tempo “Beautiful Girl,” the ballad ‘The Back Of My Hand Brushes Against,” and the other dance track “Tell Me Why” are also pretty solid tracks.  The only song I really didn’t care for at all was “First Kiss” which in my opinion was a hip-hop/R& B mess.  It was a decent mini album, but none of the songs really stood out as a hit to me or is as memorable as say “Supa Luv.”

As for the MV of the title track, it’s a cute little number telling the story of Chun-Ji being a player with his cute girl friend during the day and his sexy noona during the uhmmm… nights?  His girlfriend gets suspicious when snuggling and smelling a light hint of perfume on him.  So what does a cheating boy do when his girl gets suspicious?  Give her the same perfume as his other girl-  so dirty.  Check out the MV.

Anyone else get freaked out by how much Niel (I think that’s who it is, the kid front and center during the choreo) looks like INFINITE‘s Sung-jong and by how long his eyes are kind of like T-ARA’s Ji-yeon. The cinematography on the MV wasn’t the greatest with the boys looking washed out at times during the white background and sunlight shots.  I was never a big fan of Teen Top’s styling and I’m still not although thank heavens their hair looks normal now.  The choreography in the MV is also a bit disappointing, especially after the strong choreo they had in “Supa Luv.”

It looks like Andy called in favors from his friends again with actress Park Si-yeon starring as the cougar noona.  Previously, After School‘s Lizzy appeared in their “Clap” MV and Andy’s band mate (and Park Si-yeon’s former boyfriend)  Eric Mun appeared in their “Supa Luv” MV.  Some netizens have been pretty jealous of the Teen Top boys recently what with them being in an exclusive photo shoot with the Nation’s Fairy Lee Hyori (by her request) and for their latest MV shoot with her Family Outing Same Aged Sister Si-yeon- arguably two of South Korea’s hottest noonas out there.  All I can say is that it pays to have a boss with celebrity friends.

Teen Top will begin their broadcast activities for Roman and their title track “No More Perfume On You” this week on Mnet’s M!Countdown on the 28th.