BEAST's Fiction: Too good to be true? 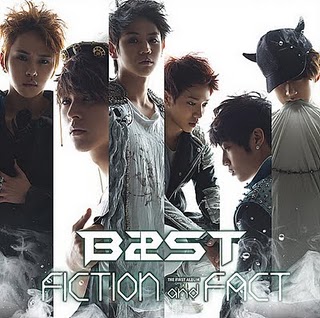 After releasing a teaser of their come back a few days ago, they released the MV for their title song “Fiction” which many are saying looks like it has a Harry Potter “Tom Riddle’s diary” aspect to the storyline featuring member Jun-hyung and Park Bo-young, check it out.

I really liked the composition of the song with the lyrics speaking of lovers trying to ‘write’ their love story into being a happy one, but alas it’s all “Fiction.”  It’s a great song, the MV was good and different with a solid storyline, but I’m not sure about the segments of the MV with the boys dancing…  for a while there I thought I was watching 2PM because of the clothes and choreography which made it a little weird.

I had a chance to do a quick listen to all the songs on the album which is ballad heavy, with no strong dance track other than the title track “Fiction.”  The two dance tracks “Back To You” and the Jun-hyung composed “Freeze” are not as solid as BEAST’s previous dance tracks.  My fave songs on the album the slow love ballads “You” and “Rainy Days,”  they are beautiful songs.  While I wouldn’t say that Fiction or Fact was a perfect first full length album, it was a pretty darn good one– and that’s a FACT.