Some k-pop fans are complaining that there are too many girl groups debuting (in fact, I think I remember that problem from 2009..) but you know what, I say bring it. If we’re at the point of desperation that we’re pushing out groups called ‘Blady’ and ‘Swincle’ – then bring it on. Blady and Swincle (ugh) both will not have their official MVs debut until later this month, but that doesn’t mean we can’t judge them by their debut showcases! 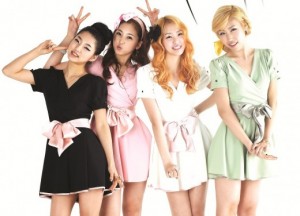 First we have upcoming four member girl group ‘Blady’ – which is how I’ve seen the name referenced on various outlets, but I wouldn’t be surprised if it were ‘B Lady’ or ‘B-Lady’ or something – and their official title track “Crazy Day“, won’t be released until May 27th. Say hello to Darae (다래), Sun Young (써뇽), Bun Hong (분홍), Kang Yoon (강윤), whom the CEO of  SY6 management says will clean out the rookie awards by year’s end.

1.This is a debut showcase, so you can’t be too hard on them, performance-wise, but…

2.THIS SONG. The only thing I’m liking out of it is the blonde girl’s (Kang Yoon?) haircut.

3. Also, apparently this is supposed to be a “retro” song, but I’m afraid A Pink’s got that market cornered girls.

4. Thank goodness they have ‘Crazy Day’ as their sexy song. For some reason this video has two performances of the song; for those who care, at 2:09 the performance is of little better quality.

5. Blondie looks like she belongs in an infinitely cooler group.

6. They’re ok I guess, but I feel like I have deja vu with this group. Clothes, dance moves, concept, it’s all so familiar. The song is also not hitting on any cylinders with me. Aw, damn it, they should just debut with ‘Spark Spark’ and gather their ahjusshi fan base early.

As a bonus, for those who can’t get enough of “retro” k-pop we have ‘Spark Spark’ , the entire song! 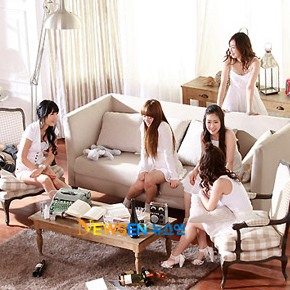 Swincle’s a little more seasoned and are expected to debut with with “Shake Ur Body” next week on M!Countdown and Music Bank. They are releasing their first mini album and music video on May 25th, and thus, have a MV Teaser fresh out the can. But first, the debut showcase, which includes member solos as well.

1.Well, at least they are older than the typical girl group, though they do have two years of training under their belts.

2. A couple of cover performances – hey, step off of ‘Lip Gloss’! That is Lim’s (Wonder Girls) song. Plus I really don’t want a reason to have to hear it again.

3. Didn’t have to stay for the solos and ballads (didn’t really want to), but at least we know Songhee can sing fairly well.

4. Nice dancers as well – I like that they’re wearing sneakers for all their songs, I wonder if that will translate to the stage (judging by the MV teaser, not likely). Speaking of…

Anyone feeling some dissonance between the video and the song? The performance concept was more appropriately matched. The living room looks so nice, I’d be afraid to shake something for breaking it.

Well, a couple of seconds and I’ve already forgotten both songs. Good luck to Swincle I guess, and let’s guess what name they’ll give the next poor group looking for fame. 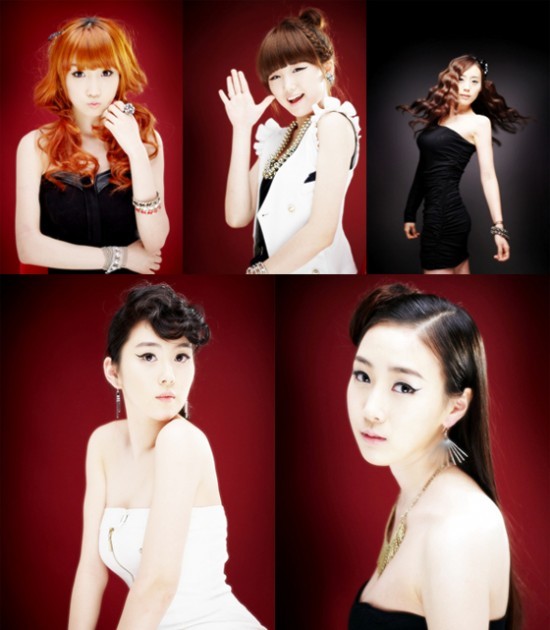