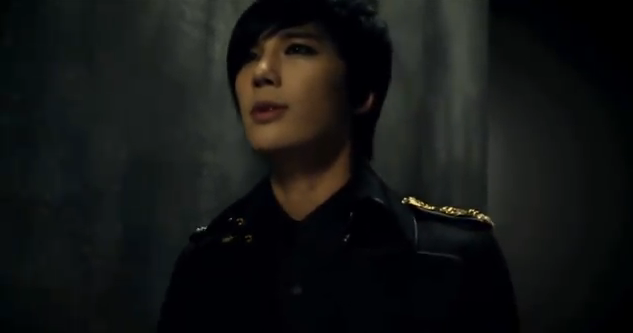 I could’ve sworn that by performing by yourself after kind of splitting from your group of five that would be considered “alone,” but maybe he feels they’re always by his side, or-  I regress…  Park Jung-min goes solo with his album, Not Alone.  The album was to come out late last year, but when th Yeonpyeong Island incident occurred close to his release date and he collapsed due to fatigue, he and his company decided to push back his album release to the beginning of 2011.

The pushed back date gave him time to polish his songs and the album which they had been rushing a little.  Check out his new teaser.

You kow Jung-min was probably my least favorite member of SS501: he wasn’t DDG (drop dead gorgeous) like Hyun-joong, he didn’t have a voice like Young-saeng, he wasn’t cute like Kyu-jong, or rdidculously ambitious and funny like Hyung-joon.  He was like the smart bitchy one.  But, I really liked this teaser.

He looks good though a little skinny (the weight he lost combined with a rigorous training schedule probably also caused the fatigued collapse he experienced earlier) and I love the strings.  I’m not saying all Kpop needs real instruments, but what it can sometimes add to a song is great.  We don’t get to hear him sing in in this teaser, but I’m hoping it’s because it’s something to look forward to, not something they wanted to hide.   The overall dark and dramatic look, which we have been seeing a lot of recently, is done well.  Hopefully, the finished product will be able to stand out from its competition.

Jung-min’s solo comeback is scheduled to be on January 2oth, the same day as Big Bang‘s Seungri, that’s some stiff competition.  May the best man, er comeback, ugh song (?), win.